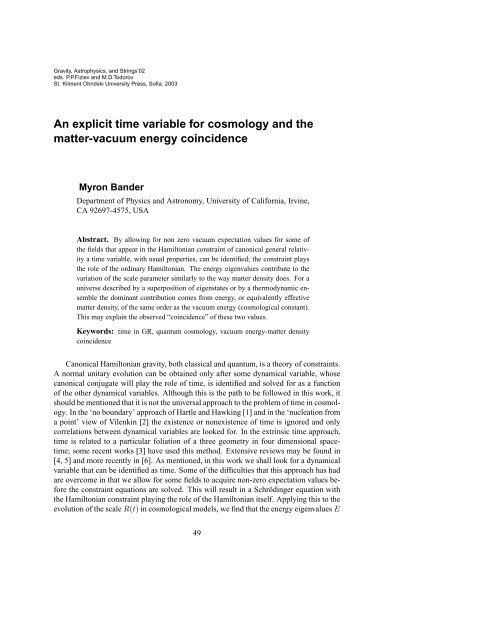 Gravity, Astrophysics, and Strings’02eds. P.P.Fiziev and M.D.TodorovSt. Kliment Ohridski University Press, Sofia, 2003An explicit time variable for cosmology and thematter-vacuum energy coincidenceMyron BanderDepartment of Physics and Astronomy, University of California, Irvine,CA 92697-4575, USAAbstract. By allowing for non zero vacuum expectation values for some ofthe fields that appear in the Hamiltonian constraint of canonical general relativitya time variable, with usual properties, can be identified; the constraint playsthe role of the ordinary Hamiltonian. The energy eigenvalues contribute to thevariation of the scale parameter similarly to the way matter density does. For auniverse described by a superposition of eigenstates or by a thermodynamic ensemblethe dominant contribution comes from energy, or equivalently effectivematter density, of the same order as the vacuum energy (cosmological constant).This may explain the observed “coincidence” of these two values.Keywords: time in GR, quantum cosmology, vacuum energy-matter densitycoincidenceCanonical Hamiltonian gravity, both classical and quantum, is a theory of constraints.A normal unitary evolution can be obtained only after some dynamical variable, whosecanonical conjugate will play the role of time, is identified and solved for as a functionof the other dynamical variables. Although this is the path to be followed in this work, itshould be mentioned that it is not the universal approach to the problem of time in cosmology.In the ‘no boundary’ approach of Hartle and Hawking [1] and in the ‘nucleation froma point’ view of Vilenkin [2] the existence or nonexistence of time is ignored and onlycorrelations between dynamical variables are looked for. In the extrinsic time approach,time is related to a particular foliation of a three geometry in four dimensional spacetime;some recent works [3] have used this method. Extensive reviews may be found in[4, 5] and more recently in [6]. As mentioned, in this work we shall look for a dynamicalvariable that can be identified as time. Some of the difficulties that this approach has hadare overcome in that we allow for some fields to acquire non-zero expectation values beforethe constraint equations are solved. This will result in a Schrödinger equation withthe Hamiltonian constraint playing the role of the Hamiltonian itself. Applying this to theevolution of the scale R(t) in cosmological models, we find that the energy eigenvalues E49

50 M. Bandercontribute in the same functional form as the matter density, which varies as 1/R 3 but ismultiplied by R 3 . A universe, whose wave function is a superposition of such eigenstates,may result in the effective matter density and the vacuum energy (cosmological constant)tracking each other. This would explain the present “coincidence” of these two values[7]. In obtaining these results we use the minisuperspace approximation; at each step,however, we show how the terms we introduce arise from a Lagrangian fully compatiblewith general relativity.Hamiltonian gravity and cosmology are usually treated in the, afore mentioned, minisuperspaceapproximation, where the continuous set of gravitational and other degreesof freedom are reduced to a small number of collective, spatially constant fields. In thesimplest case, the dynamics of a Robertson-Walker-Friedman universe, with a metric[ ]drds 2 = N 2 (t)dt 2 − R 2 2(t)1 − kr 2 + r2 dΩ 2 , (1)are specified by the action for the one variable R(t)∫S = [P R dR − Ndt H G (P R , R)] (2)with P R being the momentum conjugate to R andH G = − G3πR P 2 R − 3π4G(kR − ΛR33)+ 2π 2 ρ(R)R 3 ; (3)G is Newton’s constant, Λ is the cosmological constant and ρ(R) accounts for the matterand radiation density. Varying this action with respect to the lapse function N yields theconstraint H G (P R , R) = 0 and setting the variation of H G (P R , R) with respect to P Rand R to zero insures the conservation of the energy-momentum stress tensor; there is noroom for both time and a dynamical variable that depends on it.To allow for the introduction of time more fields have to appear. A Lagrangian for ascalar field τ,∫L τ = d 4 x √ −g gµν2 ∂ µτ∂ ν τ , (4)can be added to the one for gravity; in the minisuperspace approximation this changesEq.(2) toS =∫ [( )]P R dR + π τ dτ − Ndt H G + π2 τ2R 3 , (5)where π τ is the momentum conjugate to τ. One then tries to make τ play the role of timefor R or vice versa. A serious drawbacks of this approach is that the resulting Schrödingerequation is hyperbolic and problems similar to those that occur in the first quantizedtreatment of the Klein-Gordon equation also occur here. These problems would go awayif π τ were to appear linearly in the coefficient of N in Eq.(5). This is a goal of this work.To achieve this end we add to the following to the Lagrangian for pure gravity:∫ { [ √−g gL t = d 4 µνx2 ∂ µτ∂ ν τ + bg µν ∂ µ τ∂ ν χ−c(g νν′ g λλ′ g σσ′ H νλσ H ν ′ λ ′ σ ′ + h2 ) 2] }+ dɛ µνλσ ∂ µ χH νλσ , (6)

An explicit time variable for cosmology and the matter-vacuum energy coincidence 51τ is the field whose spatially constant part will ultimately play the role of time. χ isa cyclic field, 0 ≤ χ < 2π and H νλσ is an antisymmetric three indexed tensor field.With h 2 positive the third term in eq. (6) ensures that the spatial parts of H acquire anexpectation√value. It should be noted that due to the ɛ µνλσ in the coefficient of d, no−g is necessary for this term and, by design, no (∂χ) 2 appears in the Lagrangian; thecyclic nature of the field χ can result from χ being the phase of a regular complex fieldwhose magnitude is fixed to some vacuum expectation value. A kinetic energy for H νλσcan occur as can a potential involving τ. We will show that this produces a π τ appearinglinearly in the constraint.The minisuperspace approximation to (6) is∫L tMS = dt[R 32N( ) 2 dτ+ b R3 dτ dχdt N dt dtReplacing H ijk by its vacuum expectation valuethe Hamiltonian corresponding to L tMS isH tMS =−cNR 3 ( H ijk H ijk /R 6 − h 2) 2+ ddχdt ɛijk H ijk]. (7)< H ijk >= R3 hɛ ijk6N [b 2 R 3 bπ τ (π χ − dhR 3 ) − 1 ]2 (π χ − dhR 3 ) 2 . (9)In the fixed π χ = 0 (a small value for the parameter b would favor π χ = 0) sectorwe recover a term linear in π τ . Rescaling τ we obtain, instead of the Wheeler-de-Wittequation, a Schrödinger equation with H G acting as a normal Hamiltonian [8],(8)−i ∂∂τ + H G = 0 . (10)The contribution of an eigenvalue E of Eq.(10) for H G corresponding to Eq.(3) cannotbe distinguished from the contributions of matter, ρ M (R) ∼ 1/R 3 , to the evolution of thescale parameter R; thus we may consider (E − 2π 2 ρ M R 3 ) to be the effective energyeigenvalue, or equivalently (ρ M − E/2πR 3 ) the effective matter density. Interestingresults obtain for a universe that, rather then being a state with a definite energy, is asuperposition of such eigenstates∫Ψ(R, τ) = dEf(E)ψ E (R)e −iEτ ; (11)ψ E (R) is an eigenfunction of H G and f(E) describes the energy wave packet. Thepossibility now arises that at different R’s different E’s dominate the integral in Eq.(11).Should the E and R dependence ln ψ E (R) appear in the combination( ) ΛRln ψ E (R) = R 3 3g , (12)E