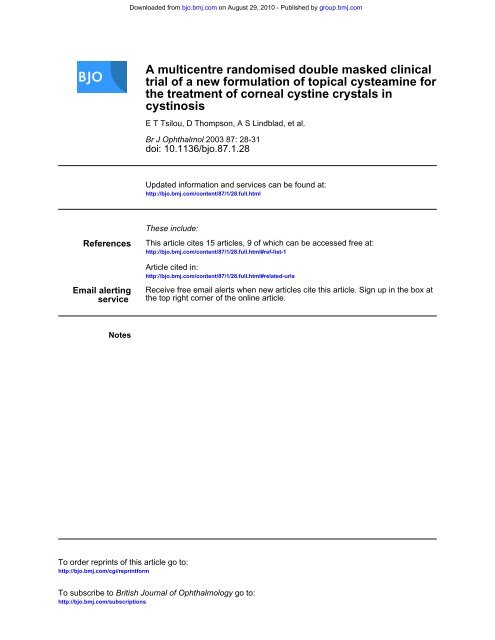 A multicentre randomised double masked clinical trial of a new ...

A multicentre randomised double masked clinical trial of a new ...

Downloaded from bjo.bmj.com on August 29, 2010 - Published by group.bmj.comA topical cysteamine for corneal cystine crystals in cystinosis 29Table 1Ocular adverse events (combined safety and efficacy arms)Standard formulationNew formulationEfficacy(n=15)Safety(n=20)Efficacy(n=15)Safety(n=20)Events persisting in excess of 1 hourRedness 3 4 3 6Itching 1 0 1 1Irritation 1 0 1 2Pain 0 0 0 0Blurring 0 0 0 0Burning 1 0 1 0Discomfort 2 0 2 0Severe pain 0 0 1 0Total eyes with at least one event 4 (27%) 4 (20%) 4 (27%) 6 (30%)Number of eyes with any event persisting less than 1 hour 7 (47%) 5 (25%) 10 (67%) 15 (75%)Total eyes with at least one event of any duration 8 (53%) 6 (30%) 11 (73%) 15 (75%)a third grader assessed the photograph. The median score wasused as the CCCS for that study subject.Follow up ophthalmic examinations were performed at 6months for the safety study subjects and every 3 months for 1year for the efficacy study subjects. Study subjects were evaluatedfor the presence of photophobia and blepharospasm withthe examination including best corrected visual acuity, slitlamp biomicroscopy, and slit lamp photography with assignmentof a follow up CCCS by the masked graders.The study subject or parent was asked to keep a daily calendarrecording each administration of study medication andthe study subject’s ocular status regarding side effects(namely, changes in vision, blurring, redness, episodes ofacute corneal pain, other pain, irritation, itching) in each eye.These calendars were compiled by the study coordinator toassess compliance and adverse events after 1, 2, and 4 weeks,then every 3 months thereafter until month 12. The studycoordinator scored compliance using one of “1” (poor,8/day).Average overall compliance was calculated based on theseseven assessments. Telephone contact with study subjects wasmade 1 week, 2 weeks, and 1 month after initiation of studytherapy to verify possible adverse reactions.Primary outcome definitionsFor the safety study the primary outcome was serious adversereaction associated with the new formulation of cysteaminecompared to the standard formulation. These serious adversereactions included severe redness of 50% of the conjunctivalsurface related to administration of eye drops that did notblanch with 1:1000 topical epinephrine (adrenaline), persistentpain interfering with activities of daily living, or decreasein visual acuity from corneal damage greater than one line(more than five letters) on the ETDRS chart. In addition, blurring,redness, pain, irritation, and itching lasting more than 1hour were evaluated in each eye and a comparison madebetween the eyes receiving the standard formulation versusthe new formulation at 6 months.For the efficacy study the proportion of study subjects witha reduction in CCCS of 1.00 unit or more in the eye treatedwith the new formulation and in the eye treated with thestandard formulation was calculated.Statistical analysisResults of this study were primarily categorical, yielding severalcontingency tables. All results are analysed according tothe study subject’s original treatment assignment (intentionto treat). Several analysis techniques were used to test for significance,including McNemar’s test for paired observations,Fisher’s exact test for 2 × 2 tables, Wilcoxon signed rank andCochran-Mantel-Haenszel test statistics.RESULTSBaseline evaluationA total of 20 subjects were enrolled in the safety study and 16in the efficacy study between September 1998 and July 1999.There were 13 (65%) males in the safety study and seven(47%) males in the efficacy study. All study subjects (100%)were white. Mean age at enrolment was 12.9 years (median11.5 years, age range 5–27 years) in the safety and 6 years(median 6 years, age range 2–11 years) in the efficacy study.All eyes had a baseline CCCS of at least 1.25 in the efficacystudy. One study subject prematurely discontinued therapyand did not return for follow up in each study.Study outcomeNone of the study subjects experienced any of the serious ophthalmicadverse reactions defined in the protocol and describedin the Methods section. Only one study subject in the safetystudy lost more than one line of vision. This loss was attributedto testing inconsistency. Table 1 lists the number of eyes thatexperienced redness, itching, irritation, persistent pain, blurringor burning for more than 1 hour as well as events lastingless than 1 hour. There was no difference (p>0.5) between thetreatments in the number of eyes with adverse events persistinglonger than 1 hour. Stinging and burning sensations werethe most common short term reactions and were morefrequently reported in the eye treated with the new formulationin both studies but the difference was significant only inthe safety study. Four of the safety and seven of the efficacystudy subjects reported systemic adverse events that werethought to be unrelated to the study medications.In the safety study a decrease of 1.0 or greater (improvement)in CCCS after 6 months of therapy was observed fornone out of nine eyes (0%) with baseline CCCS of >1.0 on thenew formulation and three out of 10 eyes (30%) assigned tothe standard formulation. Table 2 summarises changes inCCCS for all efficacy study subjects for the standard and theTable 2 Efficacy study at 1 year: corneal cystinecrystal score (CCCS) changes from baselineStandardformulationNewformulation>1 unit improvement* 7 (47%) 1 (7%) 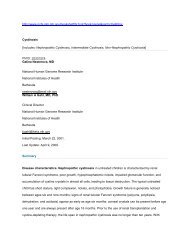 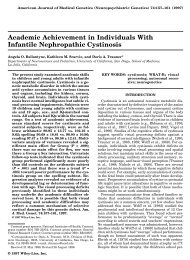 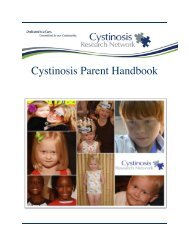 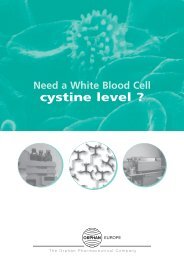 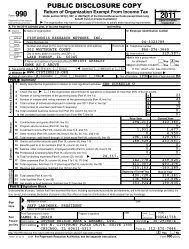 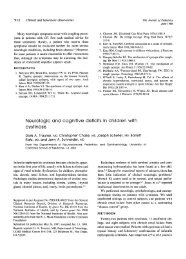 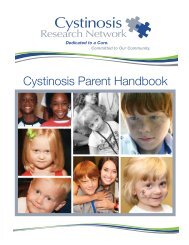 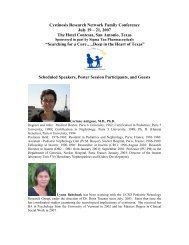 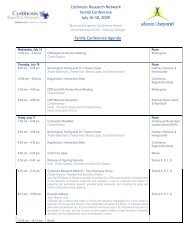 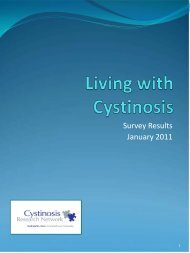 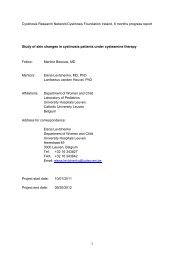 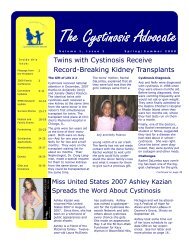 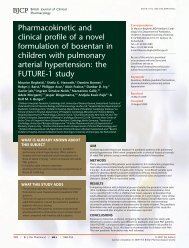 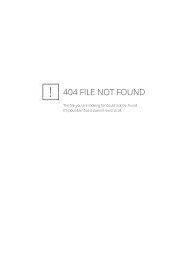 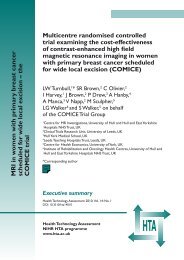 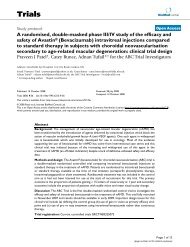 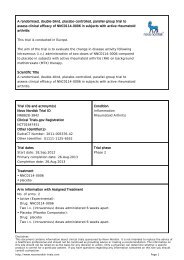 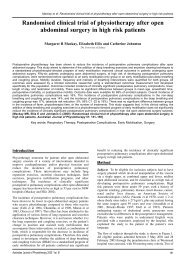