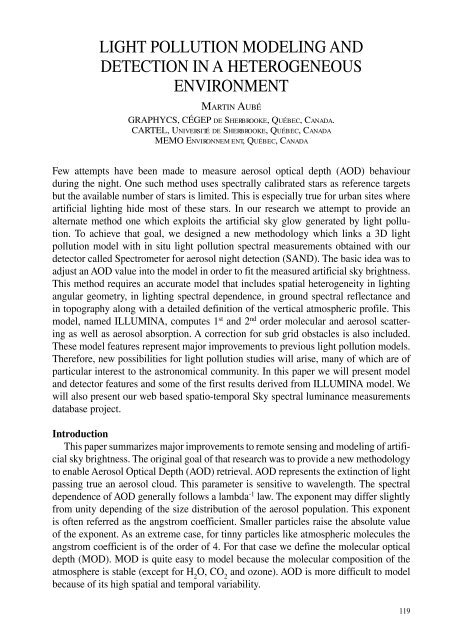 Figure 3: The SAND spectrometerSpectrometer descriptionThe determination of the sky luminance withour modeling technique is not sufficient to trackAOD. We also need to compare model predictionwith in situ measurements. To achieve that task, wedesigned a portable and automated spectrometer.This instrument, called Spectrometer for AerosolNight Detection (SAND 5 ), is basically a longslit spectrometer combined with a cooled CCDdetector. Along with the spectrometer, the systemis complemented by a set of environmental sensors(luminosity, temperature, humidity) and bya remotely controlled web cam. To benefit all theSAND features, the system has to be connected to the internet. In that case the user cantake the control of the system remotely for manual operation or to program an automatedobserving sequence. The instrumentFOV is 14 deg. which allowa relatively good sensitivity whileallowing the monitoring of lightpollution multi-angular behaviour.Integration time in urban environmentis of the order of a few minutesbut it increases up to 2h in astronomicaldark sites. Figure 3 showan image of the opto-mechanicalpart of SAND. Detailed instrumentspecifications are given in table 1.SAND is protected from rainand snow for permanent outdooruse. There is also a UPS to protectthe instrument from electrical problemsand form short term powerfailure. Fans and heating systemallow maintaining proper operatingtemperature. A webcam is alsoinstalled in the system in order tomonitor remotely the state of thesystem, which is a great advantagefor maintenance means. SAND isnow constructed by MEMO Environnement6 and therefore somemore information about this instrumentcould be found on their website.Table 1: Technical specifications of the SAND spectrometer.FeatureField of view without extension tubeSlit widthFocal length of collimation lensCollimator diameterDiffraction grating grooves per mmFocal length imaging lensImaging lens diameterCCD chipValue14 o100 microns50 mm25 mm600 lines/mm28 mm10 mmKodak KAF-0402MEChip size 510 x 765Pixel sizeCCD cameraMain computerNetwork interfacePortsRAMHard diskRouterMountMaximum electric power without fansand heating9 x 9 microns-10 o CAMD Sempron 2600+ minimum1 x 10/100Mbps minimum1 USB-2 port and 1 serial portminimum256 MB minimum80 GB IDE minimum4 portsLXD-75 with autostar80 WBattery backup APC Back-UPS ES 500Typical duration of a direction changeTime to flush ghost imageSpectral band60 sec270 sec400 nm – 700 nm122

Modeling experimentsAs a first step we tried to conduct a sensitive study with ILLUMINA. We assumed acircular city with constant light fixture luminosity per unit of ground surface. We did notput any topography but we set obstacles height to 7 meters and MRR to 150 meters. Wealso put a constant reflectance of 0.15 all over the domain. Light fixtures were supposedto be semi-cutoff, like cobraheads fixtures. Our first experiment was to estimate theimportance of the 2 nd order scattering compared to the first order scattering contributionto the total sky spectral luminance. This was done by setting MSR to its maximum value(equal to the modeling domain size) and then by setting MSR to zero. When MSR is setto zero, only the first scattering is computed. The difference MSR∞ - MSR0 gives thecontribution of the second order scattering to the total spectral luminance. The resultsof that experiment for a zenithal line of sight showed big differences depending on theposition of the observer. For an observer located right inside the city, 2 nd order scatteringcontributes to about 10% of the total luminance. This clearly indicates that 2 nd order scatteringcannot be neglected for light pollution modeling. But the most striking result wasobtained for the case of a countryside observer. We found that the 2 nd order contributionrises with distance from city limits and may rises up to 66% of the total luminance forvery remote sites. This resultis in contradiction with previousresults obtained withsimpler models. Accordingto previous models thesky luminance for remotesites was supposed to bedominated by light emittednear the horizon 7 . In factthis is not the case becausethose light paths are rapidlyFigure 4: Numerical model of the luminary’s inventory for ScotstownCanada.stopped by sub grid obstacles like trees and buildings. Another important factor whichmay explain this discrepancy is the fact that the first order dome is a non point likesource, it is expected that its contribution decrease less rapidly with the distance in comparisonwith first order scattering.We also conducted an experiment to investigate an optimal value for the MSR. MSR 0is directly related to the computational time. It is then very important in a technical pointof view to restrict its size so that the associated error remains small (under 1% of the totalluminance). Our experiment showed that it is achieved when MSR include all city lights(i.e. the distance from city centre plus the city radius).We also used ILLUMINA in orderto conduct a public light conversion scenario. This experiment was conducted in theframework of a large light conversion plan around the Mont Mégantic observatory 8 inQuebec Canada. The experiment was applied to the city of Scotstown. The scenario wasto reduce overall light luminosity by a factor of 2 along with replacing existent cobraheadfixtures (6% upward flux) by cutoff fixtures (Helios, 0% upward flux). A numericalmodel of Scotstown lighting facilities (figure 4) have been made at a nominal horizontalresolution of 150 m. Grey levels on figure 4 are proportional to the total luminosity123

Figure 5: Results from the Scotstown lighting conversion scenariosimulation.124per cell. For that experiment, weevaluated zenithal sky luminancein downtown (yellow dot on fig. 4)for four cases. The two first casescorrespond to the present situationfor summer (reflectance of 0.085inside the city and 0.11 outside)and for winter (reflectance of 0.98everywhere). The experiment wasdone for a wavelength of 550 nm.The two remaining cases correspondto the conversion scenariodescribed above again for summerand winter. The results are shownon figure 5. Excluding the fact thatthe overall luminosity has beenreduced by a factor of 2 we can conclude that for the summer case, the effect of convertingcobraheads to cutoff reduced the sky luminance by 28 percent of its initial value. Forthe winter case the effect of changing light output geometry increase the total luminanceby 12 percent from its initial value.We also tested the spectral behaviour of the light pollution. For that experiment weused the numerical model of Scotstown before conversion. We changed the wavelengthwhile assuming a constant spectral flux of light fixtures. We assumed an aerosol angstromcoefficient of 1.3 which is typical of clear continental atmospheric conditions. Figure 6shows the result of that last experiment. It is interesting to notice that in the blue regionthe spectral dependence is dominated by molecular extinction (lambda -4 law) while inthe red region, it is dominated by aerosols (~lambda -1 ). But an interesting feature maybe observed around 550nm where there is a small bump on the curve. This bump wasgenerated by the green reflection peak of the vegetation. In fact, inside the city, thereflectance has been determined by a mixing of 35% of the vegetation reflectance andof 65% of the asphalt reflectance.We also made a crude estimationof the relative contribution of mercurylamps versus sodium lampsfor a constant luminosity (constantlumen). We assumed that mercurylight is equally produced by twomain spectral lines (436.8nm and546.1nm) while the light of sodiumis mainly generated at 589 nm. Thisgives that mercury lamps generates2.5 times more light pollution thanFigure 6: Effect of wavelength for a constant spectral flux underclean atmosphere (AOD_550nm = 0.07) cobrahead fixtures.sodium for a constant number oflumen.

Figure 7: Effect of moonlight and of San Diego and RiversideCounties lighting code on sky spectral luminanceobserved with SAND from Mount Palomar Observatoryin May 2005.Artificial sky spectral luminanceexperimentsThe SAND spectrometer was usedin a variety of conditions. The first andongoing experiment is to monitor lightpollution temporal evolution at MontMégantic observatory while the conversionproject is in progress. We alsoconducted an intensive light pollutionmonitoring experiment in South-WestUSA during spring 2005. During thisexperiment we acquired data at LosAngeles, Palomar Observatory, AjoNational Monument, Kitt Peak NationalObservatory (KPNO), Lowell Observatory(Mars Hill, Anderson Mesa, and Happy Jack), and at US Naval Observatory nearFlagstaff Arizona. The main goal of this experiment was to test the reliability of theinstrument over a long term experiment (21 nights). Figure 7 gives a sample of thatdatabase. On that figure we can clearly see the impact of moon rise which increasedthe continuum part of the spectrum (especially in the blue region). An other interestingfeature is that we can clearly see the impact of the San Diego and Riverside Countieslighting code which requires Class II & III lights turned off after 11pm. Finally wereturned to Flagstaff in spring 2006 to acquire detailed multi-angular data at US NavalObservatory. The later experiment goal is to validate the multi-angular behaviour ofILLUMINA. We choose this site because the lighting inventory of Flagstaff is relativelywell known. By the way we returned back shortly to KPNO and we also acquired somedata at Fred Lawrence Whipple Observatory (mount Hopkins). As long as the data areprocessed, they are placed on a free accessed web database 9 . Interested user has to readand conform to data usage.ConclusionA lot of work remains to be done like improving the bi-directional reflectance function(BRDF) which is considered as lambertian for now. But before doing any otherchanges to the model we will concentrate our efforts toward two real condition validationexperiments. The first one will exploit the data acquired in May 2006 to validate themulti-angular behaviour of the model and the second experiment will be to validate thedecreasing function along distance from a source. For that case we had chosen a wellisolated site near Baie-Comeau (Northern Canada) to be sure that no other cities maycontaminate our data. This experiment will take place during June 2007. A graduatestudent will use the two dataset in the framework of his M.Sc. thesis.AcknowledgementsResearch funding was provided by fond québécois pour la recherche sur la nature et les technologies(FQRNT), MEMO Environnement, ministère du développement économique et régional et recherche125 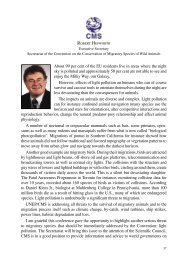 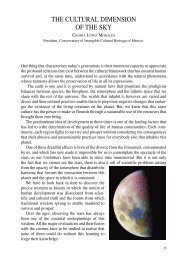 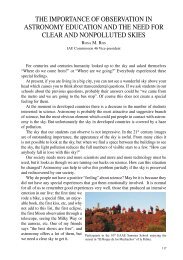 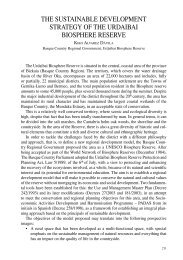 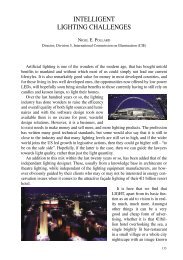 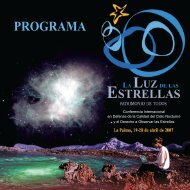 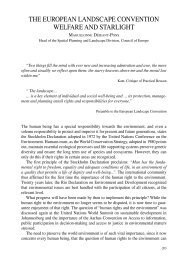 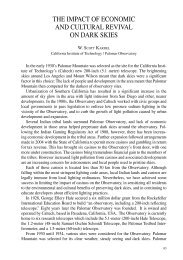 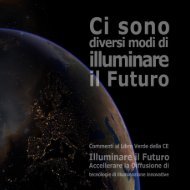 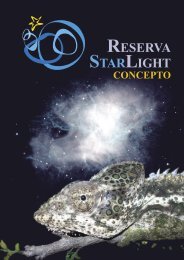 Magazine: light pollution modeling and detection in a ... - Starlight Initiative