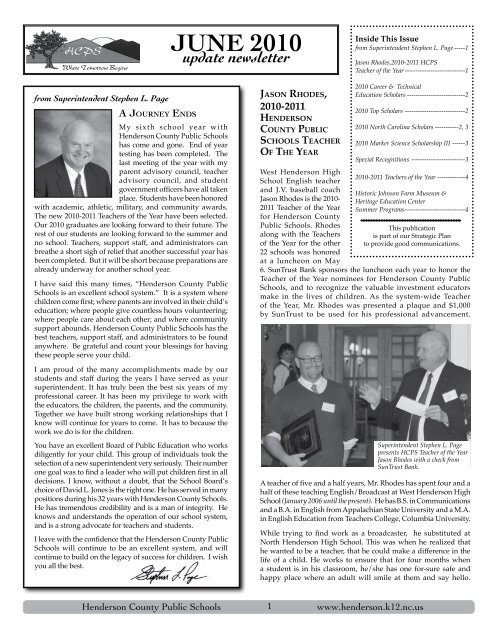 HCPSWhere Tomorrow BeginsJune 2010update newsletterInside This Issuefrom Superintendent Stephen L. Page------1Jason Rhodes,2010-2011 HCPSTeacher of the Year-----------------------------1from Superintendent Stephen L. PageA Journey EndsMy sixth school year withHenderson County Public Schoolshas come and gone. End of yeartesting has been completed. Thelast meeting of the year with myparent advisory council, teacheradvisory council, and studentgovernment officers have all takenplace. Students have been honoredwith academic, athletic, military, and community awards.The new 2010-2011 Teachers of the Year have been selected.Our 2010 graduates are looking forward to their future. Therest of our students are looking forward to the summer andno school. Teachers, support staff, and administrators canbreathe a short sigh of relief that another successful year hasbeen completed. But it will be short because preparations arealready underway for another school year.I have said this many times, “Henderson County PublicSchools is an excellent school system.” It is a system wherechildren come first; where parents are involved in their child’seducation; where people give countless hours volunteering;where people care about each other; and where communitysupport abounds. Henderson County Public Schools has thebest teachers, support staff, and administrators to be foundanywhere. Be grateful and count your blessings for havingthese people serve your child.Jason Rhodes,2010-2011HendersonCounty PublicSchools TeacherOf The YearWest Henderson HighSchool English teacherand J.V. baseball coachJason Rhodes is the 2010-2011 Teacher of the Yearfor Henderson CountyPublic Schools. Rhodesalong with the Teachersof the Year for the other22 schools was honoredat a luncheon on May2010 Career & TechnicalEducation Scholars----------------------------22010 Top Scholars-----------------------------22010 North Carolina Scholars------------2, 32010 Marker Science Scholarship III-------3Special Recognitions--------------------------32010-2011 Teachers of the Year--------------4Historic Johnson Farm Museum &Heritage Education CenterSummer Programs----------------------------4This publicationis part of our Strategic Planto provide good communications.6. SunTrust Bank sponsors the luncheon each year to honor theTeacher of the Year nominees for Henderson County PublicSchools, and to recognize the valuable investment educatorsmake in the lives of children. As the system-wide Teacherof the Year, Mr. Rhodes was presented a plaque and $1,000by SunTrust to be used for his professional advancement.I am proud of the many accomplishments made by ourstudents and staff during the years I have served as yoursuperintendent. It has truly been the best six years of myprofessional career. It has been my privilege to work withthe educators, the children, the parents, and the community.Together we have built strong working relationships that Iknow will continue for years to come. It has to because thework we do is for the children.You have an excellent Board of Public Education who worksdiligently for your child. This group of individuals took theselection of a new superintendent very seriously. Their numberone goal was to find a leader who will put children first in alldecisions. I know, without a doubt, that the School Board’schoice of David L. Jones is the right one. He has served in manypositions during his 32 years with Henderson County Schools.He has tremendous credibility and is a man of integrity. Heknows and understands the operation of our school system,and is a strong advocate for teachers and students.I leave with the confidence that the Henderson County PublicSchools will continue to be an excellent system, and willcontinue to build on the legacy of success for children. I wishyou all the best.Superintendent Stephen L. Pagepresents HCPS Teacher of the YearJason Rhodes with a check fromSunTrust Bank.A teacher of five and a half years, Mr. Rhodes has spent four and ahalf of these teaching English/Broadcast at West Henderson HighSchool (January 2006 until the present). He has B.S. in Communicationsand a B.A. in English from Appalachian State University and a M.A.in English Education from Teachers College, Columbia University.While trying to find work as a broadcaster, he substituted atNorth Henderson High School. This was when he realized thathe wanted to be a teacher, that he could make a difference in thelife of a child. He works to ensure that for four months whena student is in his classroom, he/she has one for-sure safe andhappy place where an adult will smile at them and say hello.Henderson County Public Schools1www.henderson.k12.nc.us