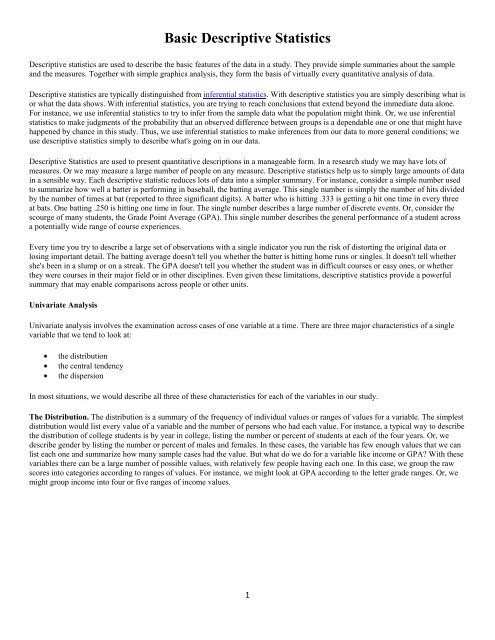 Table 1. Frequency distribution table.One of the most common ways to describe a single variable is with a frequency distribution. Depending on the particular variable, allof the data values may be represented, or you may group the values into categories first (e.g., with age, price, or temperature variables,it would usually not be sensible to determine the frequencies for each value. Rather, the value are grouped into ranges and thefrequencies determined.). Frequency distributions can be depicted in two ways, as a table or as a graph. Table 1 shows an agefrequency distribution with five categories of age ranges defined. The same frequency distribution can be depicted in a graph as shownin Figure 2. This type of graph is often referred to as a histogram or bar chart.Table 2. Frequency distribution bar chart.Distributions may also be displayed using percentages. For example, you could use percentages to describe the:percentage of people in different income levelspercentage of people in different age rangespercentage of people in different ranges of standardized test scoresCentral Tendency. The central tendency of a distribution is an estimate of the "center" of a distribution of values. There are threemajor types of estimates of central tendency:MeanMedianModeThe Mean or average is probably the most commonly used method of describing central tendency. To compute the mean all you do isadd up all the values and divide by the number of values. For example, the mean or average quiz score is determined by summing allthe scores and dividing by the number of students taking the exam. For example, consider the test score values:The sum of these 8 values is 167, so the mean is 167/8 = 20.875.15, 20, 21, 20, 36, 15, 25, 152

Although this computation may seem convoluted, it's actually quite simple. To see this, consider the formula for the standarddeviation:In the top part of the ratio, the numerator, we see that each score has the the mean subtracted from it, the difference is squared, and thesquares are summed. In the bottom part, we take the number of scores minus 1. The ratio is the variance and the square root is thestandard deviation. In English, we can describe the standard deviation as:the square root of the sum of the squared deviations from the mean divided by the number of scores minus oneAlthough we can calculate these univariate statistics by hand, it gets quite tedious when you have more than a few values andvariables. Every statistics program is capable of calculating them easily for you. For instance, I put the eight scores into SPSS and gotthe following table as a result:N 8Mean 20.8750Median 20.0000Mode 15.00Std. Deviation 7.0799Variance 50.1250Range 21.00which confirms the calculations I did by hand above.The standard deviation allows us to reach some conclusions about specific scores in our distribution. Assuming that the distribution ofscores is normal or bell-shaped (or close to it!), the following conclusions can be reached:approximately 68% of the scores in the sample fall within one standard deviation of the meanapproximately 95% of the scores in the sample fall within two standard deviations of the meanapproximately 99% of the scores in the sample fall within three standard deviations of the meanFor instance, since the mean in our example is 20.875 and the standard deviation is 7.0799, we can from the above statement estimatethat approximately 95% of the scores will fall in the range of 20.875-(2*7.0799) to 20.875+(2*7.0799) or between 6.7152 and35.0348. This kind of information is a critical stepping stone to enabling us to compare the performance of an individual on onevariable with their performance on another, even when the variables are measured on entirely different scales.Retrieved on 12/17/2009 from http://www.socialresearchmethods.net/kb/statdesc.htm#Dispersion4