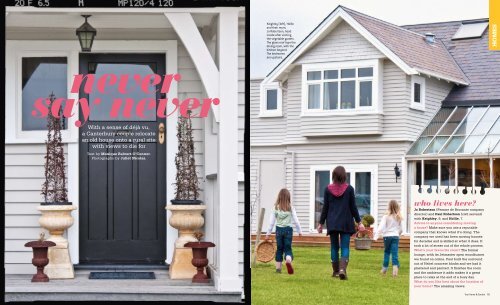 With a sense of déjà vu,

an old house onto a rural site

with views to die for

The glass roof tops the

dining room, with the

Advice to anyone considering moving

a house? Make sure you use a reputable

company that knows what it’s doing. The

company we used has been moving houses

for decades and is skilled at what it does. It

took a lot of stress out of the whole process.

What’s your favourite room? The formal

lounge, with its Jetmaster open woodburner

we found on online. Paul built the surround

out of Hebel concrete blocks and we had it

plastered and painted. It finishes the room

and the ambience it adds makes it a great

place to relax at the end of a busy day.

What do you like best about the location of

your home? The amazing views.

in a favourite shop in

Paris has found its home

across the world in this

snug corner of the lounge.

The table was an online

✚ Don’t throw out that

and you love its shape, it’s

eco-friendly to re-cover it

than it is to replace it.

jo and Paul Robertson vowed they

would never relocate a house

again. They meant it and they

stuck to it… for all of a few

onto a rural site near Tauranga, and then

set about beautifying it. The end result was

good enough to feature in Your Home &

“It was so much hard work,” Jo

remembers. “Old houses swallow up so

much cash and nothing is straight. We

swore we would never do it again.”

But then Jo, Paul and their girls,

Keighley and Hollie, moved down south

and went on an unfruitful house-hunting

mission. Unable to find a house they liked,

they thought of building.

“We found a 4.5-hectare block of land

with expansive views, but it wasn’t cheap

and to build what we wanted would have

Not sure what to do, she found the

solution in a local newspaper. “There was

a house for relocation advertised with a

photo and description. I started hyperventilating

with excitement. I checked it out

online and got really, really excited.

We went to see it and knew we had to

have it. Even though it was going to be

a major, and we never thought we’d be

going down that road again, we knew

the end result could be incredible.” The

Robertsons loved much about the twostoreyed

Welsh slate; from its sense of solidity,

character and permanence to the details –

The 246-square metre house was

moved in three parts in April 2008. From

their previous experience, the Robertsons

knew that it would not be a case of simply

slotting the pieces back together. It was

a few months before they could move in.

They needed to reinstate and revamp

the fireplaces and chimneys removed for

the shift, add more insulation and get the

Then, during their first six months in

the house, they all bunked together in the

bulk of her religious

icons in this corner

of the study. The

fabric arrived at her

store – and then went

formal lounge while the bedrooms upstairs

were re-gibbed, plastered, painted and

carpeted, with much of the work tackled

by Paul and a friend. They moved into their

Paul worked on the decks to get them

ready for summer, and then the french

doors, to let the sun into the study. Finally,

the house was painted. It went from green

and cream to a warm grey with off-white

detail – the couple chose Resene ‘Half

Truffle’ with ‘Alabaster’ for the trims.

Jo, too, is a dab hand with the

furniture transformation. A fine example is

a second-hand dressing table find that is

now a multi-coloured eye-catcher in Hollie’s

and then had fun with test pots. Another

piece she loves is the curvy-legged table in

the formal living area. She found it online,

then painted its base and legs, and sanded,

oiled and waxed its top.

But Jo’s major influence on the interior

is the way she has used fabric. It’s not

surprising that she is adept at choosing

the right fabrics for all manner of soft

blinds and upholstery fabrics, given that

she and a friend, Emily Rowse, own Femme

de Brocante, a business specialising in

used on the drapes and roman blinds in the

Spotted fabrics are hot sellers in

favourites by Hollie and

Keighley too. Hollie’s blinds, however, are

from the much-loved Cath Kidston fabric.

Jo manages to pick up bits and pieces

on annual business trips to England and

France, and enthuses over a particularly

a suitcase, it transpired.

She loves everything French, hence

muted fabrics and all such embellishment

in keeping with a French-provincial look.

Much as they love what their

beautification process has achieved so

to feel good as well as look good. And

in Canterbury, where winter daytime

good’ is about warmth. So, while the house

trumped aesthetics in the bedrooms and

formal lounge, which were carpeted for

double-glazing the windows. “From the

outside you wouldn’t know we had replaced

the wooden ones, because of the look of the

PVC windows that we’ve gone for. There

was no way we’d have aluminium windows

as that wouldn’t have been in keeping with

While the couple has already achieved

so much, this project is not yet over.

New regulations require all their home’s

load-bearing walls to be strengthened. It’s

a mission, Paul says, in certain parts of the

house where the wood panelling needs

to be removed and replaced. Jo will be

waiting with paintbrush at the ready, as

she plans to paint the wood panelling and

the rimu kitchen in a warm white – Resene

‘Bianca’. “I know some would consider this

sacrilege, but I just love paint.”

By then, it will be time to plant their

a garage that will be in keeping with the

style of their classic home.

“There’s a lot that will keep us busy

finished, but we love it already.”

choose your fabric before you

choose your paint colours. It is

than it is to match fabric to

limitless, but unless you have

Keighley relaxes in her

room, where the lockers

are a real eye-catcher.

The heart hanging at the

end of her antique bed

there’s plenty of room for the chooks to

roam – they’re part of the family and have just

had their second lot of babies, much to the girls’

at the ready with her basket, helping her

mum with the vege gathering; Jo’s a savvy

shopper – the wrought iron table and chairs on

the north-facing side of the deck are another

online buy; gumboots for all. 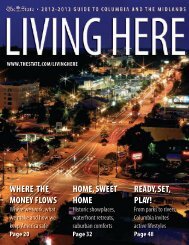 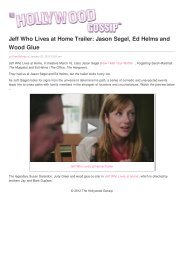 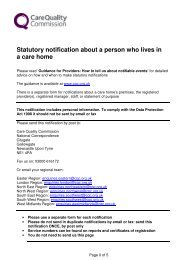 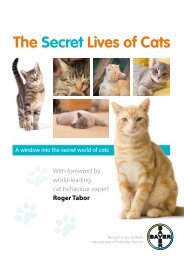 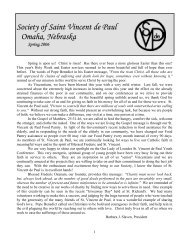