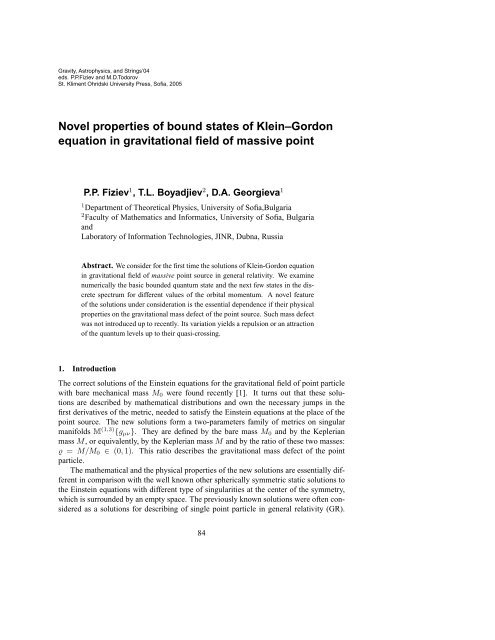 Novel properties of bound states of Klein–Gordon equation in... 91studied until now, because for the standard Hilbert form of the Schwarzschild solution”the bare rest-mass density is never even introduced” [8] correctly. The dependence ofthe first four energy levels ε 2 0 l,1 l,2 l,3 lon the mass ratio ϱ is shown in Figure 5 for l = 2.A typical steep-like dependence of the discrete eigenvalues ε 2 n l on the variable ϱ2 is seen.For each value of the principle quantum number n the number of the jumps of ε 2 n l (ϱ2 )depends on the number of the maxima of the corresponding wave function which aremoved from the inner well to the exterior one during the transition regime, which developswith the increase of the values of the mass ratio ϱ.It is clear that such nontrivial behavior of the eigenvalues ε 2 n l (ϱ2 ) of the Klein-Gordonequation in a gravitational field of a point particle is due to the existence of two finitepotential wells: 1) An inner one which has a size of order of the Schwarzschild radiusand in general case of macroscopic orbital momenta is very deep; and 2) An exterior one,which is extremely shallow in comparison with the inner well. The normal world withalmost Newton gravity “lives” in the exterior well. The both wells are separated typicallyby a huge potential barrier which looks like a centrifugal barrier from outside, and as asuspensory barrier of the type of a spherical potential wall from inside. Our calculationsdescribe the quantum penetration under this barrier. The quantum result depends stronglyon the mass defect of the point source.0Cases: µ = 1, l = 2, n = 0, 1, 2, 3, 4−0.01Eigenvalues−0.02−0.03ε 42ε 32ε 22ε 12ε 02−0.041Ε−007 1Ε−005 0.001 0.1ϲ 2Figure 6: The attraction and the repulsion of the quantum levels ε n l for different values of thegravitational mass defect of the point source.The obtained in this article behavior of a quantum test particles in the gravitationalfield of point source of gravity seems to us to be much more physical then the one inthe wide spread models of black holes. Clearly, in contrast to such space-time holeswith nonphysical infinitely deep well in them, in our case the finite inner well plays therole of a trap for the test particles. It is not excluded that this way one may be able toconstruct a model of very compact matter objects with an arbitrary large mass and a sizeof order of Schwarzschild radius. It’s possible that such type of objects may explain theobserved in the Nature compact dark objects. They may be the final product of the stelarevolution, instead of the quite formal and sophisticated constructions like black holes

92 P.P. Fiziev, T.L. Boyadjiev, D.A. Georgievawhich correspond to empty space solutions of Einstein equations. Of course, at presentthese possibilities are an open problem which deserves further careful study.It is easy to observe one more astonishing phenomena in the discrete spectrum of atest quantum particle in gravitational field of point source. It is related, too, with themass defect of the source. If one puts in the same figure the functional dependence ofall discrete eigenvalues ε n l on the squared mass ratio ϱ 2 = g tt | r=0 (see in [1]), one canobserve a repulsion and an attraction (up to a quasi-crossing) of these levels, as shownin Figure 6. Such type of behavior of quantum discrete levels is well known in the laserphysics, in the neutrino oscillations and in other branches of quantum physics. To the bestof our knowledge we are observing such behavior of quantum levels in the fundamentalgravitational physics for the first time.4. ConclusionsIn the present-days traditional approach to the motion of test particles in the Schwarzschildgravitational field, inside the event horizon there exist a nonphysical infinitely deep potentialwell. Everything which somehow can be placed inside this well will fall unavoidableto its center ρ = 0 for a finite time. It is well known that this center is a physicallyinadmissible geometrical singularity. To hide such undesired singularity one must usea unprovable mathematical hypothesis like the cosmic censorship one. Today we haveenough examples which show that such hypotheses can not be correct at least in its originalformulation, see, for example [9] and the references therein.In the article [1] the principal role of the matter point source of gravity was stressed.In GR the matter point source presents a natural cutting factor for the physical values ofthe luminosity variable ρ ∈ [ρ 0 , ∞), where ρ 0 > ρ G (5). This is because the infinite massdensity of the matter point changes drastically the geometry of the space-time around it.In full accord with Dirac’s suggestion [6] this cutting places all nonphysical phenomena,together with the very event horizon in the nonphysical domain of the variables and yieldsa large number of new interesting phenomena.In particular, as shown in the present article, the described cutting yields an interestingnovel discrete spectra for Klein-Gordon test particles in the gravitational field of massivepoint. Mathematically this is caused by the universal change of the boundary conditionsfor the corresponding wave equation, due to the presence of the matter source of gravityand depends on its mass defect.A real discrete spectrum does not exist in the case of black hole solution, just becauseof the presence of a hole in the space-time, which absorbs everything around it. Ourconsideration gives a unique possibility for a direct experimental test of the existence ofspace-time holes. If one will find a discrete spectra of corresponding stationary waves,propagating around some compact dark object, one will have indisputable evidence thatthere is no space-time hole inside such object. If, in contrast, one will find only a decayingquasi-normal modes with complex eigenvalues (see [5] and the references herein), thiswill indicate that we are observing indeed a black hole.We have obtained similar results for electromagnetic and gravitational waves in thegravitational field of point particle[10]. Their further study is an important physical problemand will give us more practical physical criteria for an experimental distinguishing ofthe two complete different hypothetical objects: 1) the space-time black holes and 2) thepossible new very compact dark objects made of real matter. Present days astrophysical

Magazine: Novel properties of bound states of KleinâGordon equation in ...