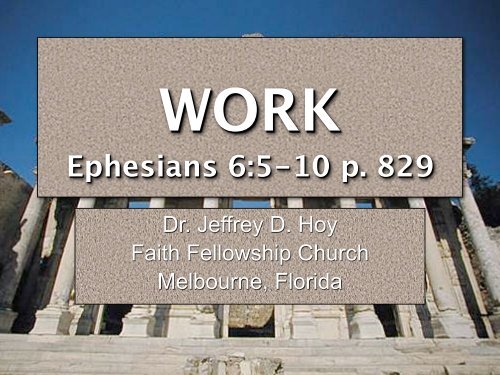 Ephesians 6:5-10 (NIV)[5] Slaves, obey your earthly masterswith respect and fear, and withsincerity of heart, just as you wouldobey Christ. [6] Obey them not only towin their favor when their eye is onyou, but like slaves of Christ, doingthe will of God from your heart. [7]Serve wholeheartedly, as if you wereserving the Lord, not men,

[8] because you know that the Lord willreward everyone for whatever goodhe does, whether he is slave or free.[9] And masters, treat your slaves in thesame way. Do not threaten them,since you know that he who is boththeir Master and yours is in heaven,and there is no favoritism with him.

What do we do with

In the Ancient World…• The primary mode of labor and“employment” was slavery.• Rome had artisans, tradesmen andtraders.• Labor was done by slaves.• There were over 60 million slaves in theRoman empire— One-third of thepopulation—

Slavery inOld Testament Times…• People became slaves through debt orconquest.• Slaves were normally freed after 7 years inthe year of Jubilee.• Freed slaves could commit themselvesvoluntarily to the care of a master.• Extensive laws ruled the humanetreatment of slaves.• Freedom was established every 7 years.

Roman Slavery…• Was much more brutal– but was still morehumane than slaughter of conqueringpeoples.• Slaves operated seamlessly in society andcould eventually become “freedmen”under Roman law.• Slavery was something like employment orpaying a secured debt.• American Slavery was brutal bycomparison.

Luke 4:18-19Jesus declared:"The Spirit of the Lord is on me,because he has anointed me topreach good news to the poor. Hehas sent me to proclaim freedom forthe prisoners and recovery of sight forthe blind, to release the oppressed, toproclaim the year of the Lord's favor."

Neither Jesus nor Paul tried tooverthrow the institution of slavery.• Jesus did not confront slavery because itwas seldom practiced in 1 st centuryJudaism.• Jesus came to the house of Israel andrarely engaged Gentiles.• Jesus did not seek to overthrow the paganand oppressive rule of Rome–

Paul…• Encountered many Pagan Institutionssuch as slavery.• Opposed idolatry and ritual prostitution butnot slavery.• Was mostly concerned with proclaimingthe Gospel of Grace and establishingchurches that would live as communitiesof Grace.• Paul proclaimed a liberation of the heart.

Galatians 3:28• “There is neither Jew nor Greek, slave norfree, male nor female, for you are all onein Christ Jesus.”• Paul’s focus was on the change of heartthat is rendered by the Gospel of Christand the work of the Spirit.• In Philemon– Paul pleaded the case of theGospel on behalf of a runaway slavenamed Onesimus– treat him as a brother.

Does the Bible support Slavery?• Not at all– only that the agenda of God hasa timing.• Jesus proclaimed freedom for the prisoner.• Old Testament – Year of Jubilee andhumane treatment.• New Testament - Paul confronts practicalissues of how slaves and slave ownersrelate.

1 Corinthians 7:20-24 (NIV)[20] Each one should remain in the situationwhich he was in when God called him. [21]Were you a slave when you were called?Don't let it trouble you--although if you cangain your freedom, do so. [22] For he whowas a slave when he was called by the Lordis the Lord's freedman; similarly, he who wasa free man when he was called is Christ'sslave. [23] You were bought at a price; do notbecome slaves of men. [24] Brothers, eachman, as responsible to God, should remain inthe situation God called him to.

Evangelical Christians called forAbolition of Slavery...• Charles Spurgeon called slavery "thefoulest blot" which "may have to bewashed out in blood” -- his sermons wereburned in America.• John Wesley called slavery "the sum of allvillainies" and railed against it.• Charles Finney was a key force in theChristian Abolitionist movement.

How do we apply thisteaching?• Believing Slaves and Masters-- ?• Best application is that of Employersand Employees• Both are to walk under God'sauthority.• Both have responsibilities.

Work is a God thing…• Genesis 2:2 - By the seventh day God hadfinished the work he had been doing; soon the seventh day he rested from all hiswork.• Creation was work.• Genesis 2:15 The LORD God took theman and put him in the Garden of Eden towork it and take care of it.• Hebrew - placed - “set to rest” in the

Work and the Curse…• Work was not viewed as hard or difficultuntil sin entered in.• Genesis 3:19 - By the sweat of your browyou will eat your food until you return tothe ground, since from it you were taken;for dust you are and to dust you willreturn."• Work was a gift from God-- to be like Him.• The “rest” of work was stolen by sin.

Employing others is a Trust…• Deuteronomy 24:14 - Do not takeadvantage of a hired man who is poor andneedy, whether he is a brother Israelite or analien living in one of your towns.• Malachi 3:5 "So I will come near to you forjudgment. I will be quick to testify againstsorcerers, adulterers and perjurers, againstthose who defraud laborers of their wages,who oppress the widows and the fatherless,

The Worker• Is to obey – “hear under” as a subordinate- listen attentively - heed or conform.• Work with fear and respect.• With sincerity or singleness of heart –without ulterior motive or subterfuge.• Just as you would obey Christ.• Don’t obey for “eyeservice”– to gain favoror only to be seen.

You are working for the Lord• He will reward everyone for whatevergood he does.• Whether slave or free– the Lord isyour employer.• Whether employer or employee– theLord is your boss.

To ALL• Finally, be strong in the Lord and in Hismighty power.• Bridge into the matter of Spiritual Warfare.• As believers– there are matters moreimportant than who is the boss and who isthe worker– who submits to whom in thefamily.• There are Kingdom Battles going on allaround us.• Our primary battles are not about fleshand blood.

Be strong in the Lord andin his mighty power 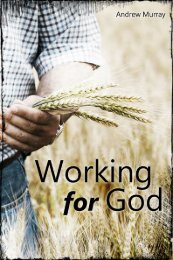