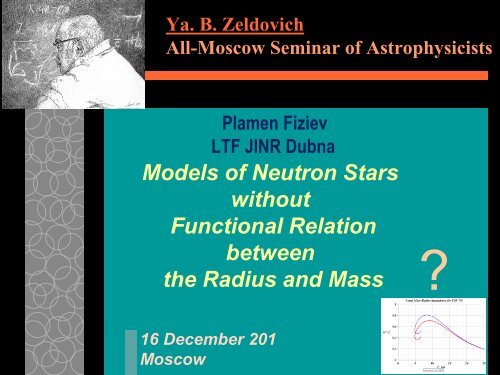 2011 ApJ 742 1 (November, the 2-nd)arXiv:1106.3131Denis A. Leahy, Sharon M. Morsink and Yi ChouThe accreting millisecond pulsar XTE J1807-294 is studied through apulse-shape modeling analysis. The model includes blackbody andComptonized emission from the one visible hot spot and makes use ofthe Oblate Schwarzschild approximation for ray-tracing. We include ascattered light contribution, which accounts for flux scattered off anequatorial accretion disk to the observer including time delays in thescattered light. We give limits to mass and radius for XTE J1807-294and compare these to limits determined for SAX J1808-3658 andXTE J1814-334 previously determined using similar methods. Theresulting allowed region for mass-radius curves is small but consistentwith a mass-radius relation with nearly constant radius (~12 km) formasses between 1 and 2.5 solar masse.

As long as an EOS mass-radius curve has sections that passthrough each of the star’s 3 σ allowed regions, it will be allowed byall 3 stars’ data.NO ONE of the EOS curves in the figure possess this property.

An old problem:Comparizon of the interior and exterior mass – radius relations

Neutron Star Discovered Where aBlack Hole Was ExpectedNovember 02, 2005, Westerlund 1A very massive star collapsed to form a neutron star and not ablack hole as expected, according to new results from NASA'sChandra X-ray Observatory. This discovery shows that naturehas a harder time making black holes than previously thought.

• Scientists found this neutron star -- a dense whirling ball ofneutrons about 12 miles in diameter -- in an extremelyyoung star cluster. Astronomers were able to use welldeterminedproperties of other stars in the cluster todeduce that the progenitor of this neutron star was at least40 times the mass of the Sun.• "Our discovery shows that some ofthe most massive stars do notcollapse to form black holes aspredicted, but instead form neutronstars."said Michael Muno, a UCLA postdoctoral HubbleFellow and lead author of a paper to be publishedin The Astrophysical Journal Letters.

Muno and colleagues discovereda pulsing neutron star in a cluster ofstars known as Westerlund 1.This cluster contains a hundred thousand ormore stars in a region only 30 light years across,which suggests that all the stars were born in asingle episode of star formation. Based on opticalproperties such as brightness and color some ofthe normal stars in the cluster are known to havemasses of about 40 suns.Since the progenitor of the neutron starhas already exploded as a supernova, itsmass must have been more than40 solar masses.

Matt Visser, Black holes in general relativity. Do black holes “exist” ?PoS BHs,GR andS trings 2008: 001, 2008, arXiv:0901.4365“This innocent question is more subtle than one might expect, and the answer dependsvery much on whether one is thinking as an observational astronomer, a classicalgeneral relativist, or a theoretical physicist.”Astronomers have certainly seen things that are small, dark, and heavy.Classical general relativist: Eternal black holes certainly exist mathematically.Theoretical physicist:We have not seen direct observational evidence of the event horizon.The mathematical solutions suffer essential physical shortcomings !Visser M, Barcelo C, Liberati S, Sonego S: gr-qc/0902.0346Small, dark, and heavy: But is it a black hole?

The center is at the metric singularity !The original Schwarzschild solution(1916)tt

arXiv:1109.4064Temporal analysis of long and shortGRB light curves carried out heresupports the 83 general observationthat the short bursts are temporallysimilar to long ones but compressed384 in time, which could be related tothe nature of the central engine ofthe respective bursts.AA sample pulse fit to one long burst GRB080723D (upperplot) and one short burst GRB090227B (lower plot). Thehistogram in black is the GRB light curve and the fittedbackground is shown as black dashed line. The pulsesshown in green are the lognormal pulses fitted to those inthe light curves. The sum of the background model andthe fitted pulses is shown as purple continuous line. Thegoodness of fit parameter, n, is indicated atthe top right corner of each plot.Sample pulse fits to the lowest 6energy channels of NaI and the fullenergy range light curve from BGOdetector of a long GRB 090626A.