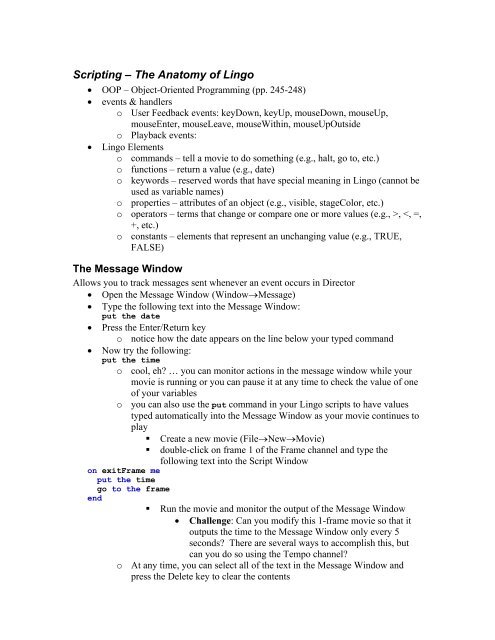 Tracing in the Message WindowThe middle toolbar button in the Message Window allows you to “Trace” all messagesbeing sent while your movie is running. Try the following• Open any movie you have created that contains scripts and/or behaviorso the movie you created in the previous section would be an excellent choicefor this demonstration• Open the Message Window and click on the Trace button (it should appear to bedepressed)• Begin playback of your movie and monitor the contents of the Message Window.• Stop playback of the movie and scroll through the contents of the text in theMessage Window; notice how each scripted command is dutifully recorded foryour reviewo This can be an extremely helpful capability as you begin to utilize moreand more of your own Lingo scriptsUsing the Behavior Inspector to Add InteractivityThe Behavior Inspector is divided into three primary sections: the Behavior pop-up &list, the Event pop-up & list, and the Action pop-up and list. If you do not see all three ofthese areas, simply click on any right-facing triangles you see and additional options willbe made available.• File→New→Movie• Create a cast member (go ahead … you choose the type)• Drag the cast member to the center of the stage• While the cast member has focus, open the Behavior Inspector if it is not alreadyon visible• Add a New Behavior that will tell your user the dateo From the Behavior pop-up, select “New Behavior”• Provide an appropriate (ShowDate) name in the textbox thatappearso From the Event pop-up, select “mouseUp”o Look through the options on the Action pop-up and notice what menu &submenus are available to you automatically.• Instead of selecting one of these, we are going to create our owncommando Click on the “Script Window” icon on the Behavior Inspector toolbaro In the window that appears, type the following line between the onmouseUp and end entriesalert (“Today is ” & the date)o Run the movie and observe what happens when you click on the sprite• Notes:• alert is a command that allows you to communicate amessage (whatever is contained in the parentheses after thiskeyword) to your user• the space before the closing quote is important, sincewithout it date would appear right after the “s” in “is”

Experiments• the ampersand (“&”) is an operator used to merge –concatenate – strings; you could use a double ampersand(“&&”) which would add a space before the concatenationo A complete version of this movie is available as “showDate.dir” on the337 server in the folder labeled “_Movies”• Challenges:• Can you figure out a way to add a period to the end of thesentence in the alert box?• Can you figure out a way to inform you user of both thedate and the time?• Using the keyword halt, can you modify this movie byadding a push button that cause playback of your movie tostop?o A complete version of this movie is available as “showDate2.dir” on the337 server in the folder labeled “_Movies”create movie with pushbutton that changes stageColor to randomcolor• File→New→Movie• Insert→Control→Push Button• Type a label for the button (“Press Me!”)• Click on the button cast member in the Cast Window (Window→Cast)o Notice the toolbar at the top of the Cast Window• In the “Cast Member Name” textbox, type “ButtonPress”• Click on the “Cast Member Script” icon … just to the right of the“Cast Member Name” textbox; if you do not see the icon, you mayneed to expand the Cast Window horizontally until it becomesvisible• alternatively, while the cast member is selected, you couldopen the Property Inspector, click on the “Member” tab,and click on the “Cast Member Script” icon about half waydown on the right side [if you do not see this icon, click onthe right-facing triangle at the bottom of the PropertyInspector to expand the box, revealing additional options]• The Script Window will open with a blank script template for the mouseUp event… just the event to which you want your script to respondo notice how the script is laid out• the first line tells the event that will trigger the script• the last line (“end”) tells Director that the script is done• the blank space in between is where you provide instructions toDirector using Lingo• Make sure that the cursor is in the blank space between the “on mouseUp” and“end” lines, then type the following text exactly:on mouseUp

the stageColor = random(255)endo In this Lingo command, you are telling Director to select a randomnumber between 0 and 255 (an 8-bit value), then assign the color locatedin that location in the current color palette to the stageColor property (asystem property that sets the background color of the Stage)• random() is a Director function that automatically selects andreturns a value between 0 and the number you type in theparentheses• Before running the movie, let’s add one more script …o First make certain that the “Loop Playback” toggle button on the “ControlPanel” is set to so that the movie does not loopo Double-click on Frame 1 of the Frame Script Channel (the bottom row ofthe top portion of the Score)o In the Script Window that appears, type the one line command below,show the script looks like this:on exitFrame mego to the frameend• In this command, you are simply telling Director that, when thePlayback head exits the current Frame, it should return to the sameframe (“the frame”)• Now run the movie and notice that, when you click on the “Press Me!” button, thebackground color on the Stage changeso If your movie starts, then stops immediately, set the “Loop Playback”toggle switch on the “Control Panel” (Window→Control Panel) to theLoop settingo As an alternative, add a second script to the• stageColor vs. bgColoro stageColor allows you to set the background color of the stage to manycolors (either 0 to 15 for a 4-bit value or 0 to 255 for an 8-bit value)o to gain greater control over these colors you can use another one ofLingo’s built-in commands:rgb(redValue, greenValue, blueValue)• this method provides you with much more control over the actualcolor that will appear than the stageColor property, since it doesnot really on the user’s current color palette … instead, it combinesvalues that you provide for the amount of red, green, and blue toarrive at the appropriate coloro Open the Cast Member Script for the “Press Me!” button and replace thestageColor command with the following rgb() statement providedbelow:on mouseUp(the stage).bgColor = rgb(random(255),random(255),random(255))end• This statement sets the bgColor property of the “Stage” object to avalue determined by randomly generating a value (from 0 to 255)

for the amount of red, green, and blue that will create the newbackground color of the Stageo Now playback the movie and see if you notice more subtle changes in thecolors that appear in response to your mouse clicks; in the unlikely eventthat your user has her/his system colors set so that only 256 colors areavailable, you will probably not see any visible difference … however, asmentioned above, the colors created using rgb() will be more accurateand consistent than those created using stageColor()• A complete version of this movie is available as “stageColor.dir” on the 337server in the folder labeled “_Movies”Modify “stageColor.dir” to change the foreColor & bgColor of a textsprite• Add two new cast memberso Click on the first empty cast member (number 3) and open the TextWindow• Type some text (e.g., “Model Text”) and make certain to set themargins of your text window so that the total width is not muchwider than the characters you just typed• Close the Text Window and drag the newly created text memberon to the stage just above the “Push Me” button• check and make certain that this new sprite appears inchannel 2 of the Score Window; the lingo commands youwill add below require that the Text Sprite be sprite number2o Click on the next empty cast member (number 4) and add another PushButton (Insert→Control→Push Button)• for the label, type “Change Text”, then move this second button tothe lower right-hand corner of the Stage• In the Cast Window, click on the Change Text button you just added and type aname in the Cast Window toolbar, then click on the Cast Member Script icon toopen the Script Windowo Type the following …on mouseUpsprite(2).foreColor = random(255)sprite(2).backColor = random(255)end• These Lingo commands set the text (foreColor property) and thebackground (backColor property) to random colors in the currentpalette• Now, run the movie and notice that, when you click on the “Press Me!” button,the background color of the Stage changes and, when you click on the “ChangeText” button, both the text color and the background color of the Text Spritechange to (usually) different values• A complete version of this movie is available as “changeTextColor.dir” on the337 server in the folder labeled “_Movies”

o Challenge: figure out a way to set the background color of the Text Spriteusing bgColor and the rgb() method instead of using the backColorproperty• A complete version of this revised movie is available as“changeTextColor2.dir” on the 337 server in the folder labeled“_Movies”Create a movie with Push Buttons to Start/Stop sound file playbackLingo allows many advanced capabilities for handling sound. However, at their mostbasic level, sounds can be incorporated very easily using the Score• File→New→Movie• Make certain that the “Span Duration” setting for new sprites is set to “1”o File→Preferences→Spriteo set the “Span Duration” setting to a value of “1”• this will ensure that when you add a sprite to the Stage or Score,the duration of the sprite is only a single frame• Create two Push Buttonso Insert→Control→Push Buttono type the label “Play”o Insert→Control→Push Buttono type the label “Stop”• adding the Push Buttons in this way ensures that they are insertedat exactly the same location which will prove desirable for thepurpose that these buttons are to serve• Notice that the Play button was added to the first frame of Sprite channel number1 in the Score and the Stop button was added to the first frame of Sprite channelnumber 2• Click and drag the Stop button from frame 1 to frame 2 of Sprite channel number2 in the Scoreo if you playback your movie now (with “Loop Playback” turned on) youwill see a rapid alternation of the two buttons as the playback headalternates between frame 1 & 2• Import a sound fileo File→Importo Locate an appropriate file, then import it using the “Standard Import”option• Click on the sound file cast member (number 3) in the Cast Window and drag it toframe 2 of Sound Channel 1 in the Score; Sound channel 2 would work just aswell for this example, but just to be consistent put it in Sound channel 1o this means that whenever the playback head is in frame 2 the sound filewill playback, but while the playback head is in frame 1, the sound filewill not play• Add brief Lingo script commands to the Push Button cast memberso Play button

Inspector will pop up. If it is already open, it will receive focus. Before proceedingmake certain that all options are available, by clicking on any right-facing triangles sothat the Behavior Inspector expands, providing additional optionsTake time to explore the options available in the three primary areas of the BehaviorInspector:• Behavior Pop-up – add new behaviors or select already existing ones• Event Pop-up – what event will trigger the behavior?• Action Pop-up – what happens when the trigger event occurs? 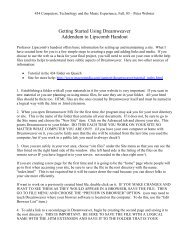 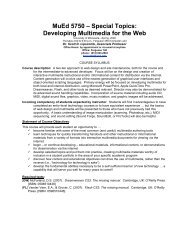 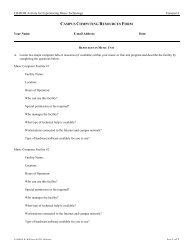 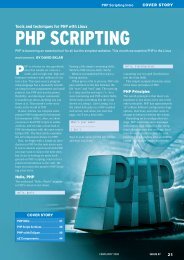 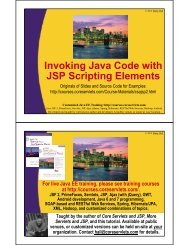