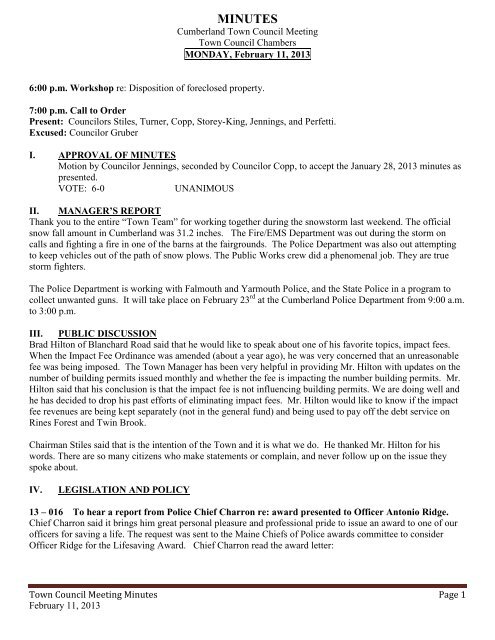 MINUTESCumberland Town Council MeetingTown Council ChambersMONDAY, February 11, 20136:00 p.m. Workshop re: Disposition of foreclosed property.7:00 p.m. Call to OrderPresent: Councilors Stiles, Turner, Copp, Storey-King, Jennings, and Perfetti.Excused: Councilor GruberI. APPROVAL OF MINUTESMotion by Councilor Jennings, seconded by Councilor Copp, to accept the January 28, 2013 minutes aspresented.VOTE: 6-0UNANIMOUSII. MANAGER’S REPORTThank you to the entire “Town Team” for working together during the snowstorm last weekend. The officialsnow fall amount in Cumberland was 31.2 inches. The Fire/EMS Department was out during the storm oncalls and fighting a fire in one of the barns at the fairgrounds. The Police Department was also out attemptingto keep vehicles out of the path of snow plows. The Public Works crew did a phenomenal job. They are truestorm fighters.The Police Department is working with Falmouth and Yarmouth Police, and the State Police in a program tocollect unwanted guns. It will take place on February 23 rd at the Cumberland Police Department from 9:00 a.m.to 3:00 p.m.III. PUBLIC DISCUSSIONBrad Hilton of Blanchard Road said that he would like to speak about one of his favorite topics, impact fees.When the Impact Fee Ordinance was amended (about a year ago), he was very concerned that an unreasonablefee was being imposed. The Town Manager has been very helpful in providing Mr. Hilton with updates on thenumber of building permits issued monthly and whether the fee is impacting the number building permits. Mr.Hilton said that his conclusion is that the impact fee is not influencing building permits. We are doing well andhe has decided to drop his past efforts of eliminating impact fees. Mr. Hilton would like to know if the impactfee revenues are being kept separately (not in the general fund) and being used to pay off the debt service onRines Forest and Twin Brook.Chairman Stiles said that is the intention of the Town and it is what we do. He thanked Mr. Hilton for hiswords. There are so many citizens who make statements or complain, and never follow up on the issue theyspoke about.IV.LEGISLATION AND POLICY13 – 016 To hear a report from Police Chief Charron re: award presented to Officer Antonio Ridge.Chief Charron said it brings him great personal pleasure and professional pride to issue an award to one of ourofficers for saving a life. The request was sent to the Maine Chiefs of Police awards committee to considerOfficer Ridge for the Lifesaving Award. Chief Charron read the award letter:Town Council Meeting Minutes Page 1February 11, 2013

The Maine Chiefs of Police Association takes great pleasure in awarding Officer Antonio Ridge the Lifesavingby a Law Enforcement Officer Commendation for your actions on December 26, 2012.On December 26, 2012 Sgt. Kevin Conger and Officer Robert Ryder of the Falmouth Police Department weredispatched to a residence for a report of a “man down with CPR being administered”. Upon arrival, Sgt.Conger and Officer Ryder found a woman performing CPR on an adult male who it was later learned was herhusband. Sgt. Conger, utilizing a department AED, determined that a shock was required. Sgt. Congershocked the individual without effect and Officer Ryder began administering CPR. At this time, Officer AntonioRidge, of the Cumberland Police Department, who is an intermediate level EMT, arrived to assist. Sgt. Congershocked the individual a second time, and Officer Ridge inserted an airway to assist with breathing.Falmouth EMS paramedics arrived and assumed care for the individual who was then breathing on his own.The individual was transported to Maine Medical Center, where he received advanced medical care. He isalive and doing well today. The Captain in-charge of Falmouth EMS, he believes that this individual is alivetoday because of the actions of Sgt. Kevin Conger and Officer Robert Ryder of the Falmouth PoliceDepartment, and Officer Antonio Ridge of the Cumberland Police Department.The citizens of Maine and the members of the law enforcement profession join in expressing their pride andgratitude for a job well done.Chief Charron congratulated Officer Ridge and presented him with his award.13 – 017 To hear a report from Fire Chief Small re: Fire Department promotions.Chief Small congratulated the gentlemen who were being promoted and invited Town Clerk, TammyO’Donnell to come to the front to swear in the officers being promoted.Ms. O’Donnell swore in Lucas Brundage as Lieutenant, Evariste Bernier as Deputy Fire Chief, and SheldonGregoire as Captain.*The next item was taken out of order to allow the Fire Chief to answer any questions the Council may have.13 – 020 To consider and act on authorizing the Town Manager to execute a purchase order for thepurchase of a new ambulance.Town Manager Shane explained that this item was discussed during the budget process. The current 2006ambulance has had some major mechanical issues, and we had to keep the 1999 ambulance in service a lotlonger than anticipated. The ’99 ambulance is currently the back-up and the ’06 is for sale, as is. The monieswill be appropriated half in this fiscal year and half in the next fiscal year. The new ambulance will be deliveredin July.Councilor Copp said that he and Chief Small sat down and reviewed the specifications. Chief Small took thetime to answer all his questions. This is a well set-up unit and will be very dependable.Motion by Councilor Copp, seconded by Councilor Storey-King, to authorize the Town Manager to execute apurchase order for the purchase of a new ambulance, not to exceed $200,000.VOTE: 6-0UNANIMOUSTown Council Meeting Minutes Page 2February 11, 2013

Mr. Healey said he feels that the Assessment Ratio of 92% in the Foreside is inaccurate due to the number ofhigher priced homes, and distressed sales in that area. Because of this, the ratios in the Foreside were all overthe place.Councilor Turner said that there are houses in the Foreside selling in the low $200’s as well as million dollarhomes. Taking the average of such a wide-range of sale prices will skew the numbers.Town Council Meeting Minutes Page 4February 11, 2013

V. NEW BUSINESSCouncilor Turner – Thank you to the first responders who did a great job during the snow storm this pastweekend.Councilor Copp – Congratulations to Officer Ridge for taking the time to become an EMT. Tony does aphenomenal job.A reminder to residents that if there is a fire hydrant near your home, take some time to shovel it out to helpthe Fire Department.Councilor Storey-King – She had the honor of representing the residents of Cumberland last week byattending the first meeting of the American Legion/VFW planning committee. The Committee plans to helpremember “the forgotten War” (Korean War) with a Veterans Day celebration. If any residents is a KoreanWar Veteran and have not submitted your name to be engraved on our Veterans Memorial, please do so. Wewant everyone to be included.Chairman Stiles – The Council has received their FY’14 budget books this evening for their preliminaryreview. The Finance Committee will meet with the auditors on Wednesday, February 13th. On Monday,February 18 th the Finance Committee will meet to review the budget line by line, for the first time.Thank you to the Public Works Department for doing a fantastic job during the snow storm.Councilor Jennings – He had the thrill and honor of attending his first Lands and ConservationCommission meeting last week. They discussed the Town Forest, the Maine Tree Club, cottontail rabbits,the upcoming report on vernal pools, and strategic planning the commission would like to do going forward.As Council Liaison to the commission, he will continue to attend the meetings monthly.He met with Brian Bickford and spent a lot of time discussing Val Halla. Brian went through all the ValHalla assets with him, and Councilor Jennings said he thinks there are ways to increase revenues at the golfcourse.Councilor Perfetti – NoneTown Manager Shane – As the Council knows, we are fortunate to have four police officers who havemedical training at the EMT level or higher. Over the last few years, they all have been involved in sometype of medical lifesaving event. We hope that someday, all police officers will be medically trained. Thatwould allow for more first responders out in our community.There will be a meeting at Town Hall on Wednesday, February 20 th at 6:00 p.m. to discuss our AquiferProtection Ordinance that will be going to the Planning Board soon. The meeting is for businesses andcontractors who might be impacted by the ordinance. The purpose of the meeting is to work with andeducate people on the importance of the aquifer, how they can help, and be part of the solution.On February 21 st , there will be a special Town Council meeting (televised) where the Manager will bemaking a presentation and recommendation on the gas main proposals.Town Council Meeting Minutes Page 6February 11, 2013 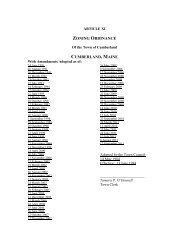 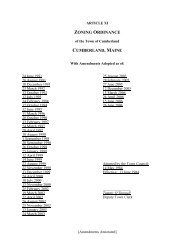 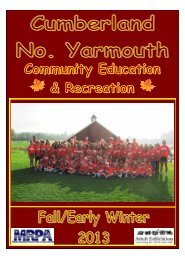 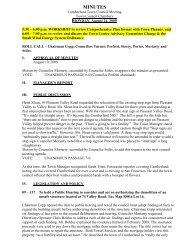 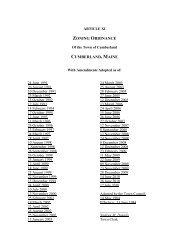 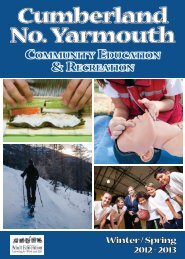 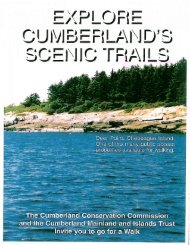 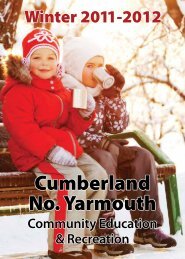 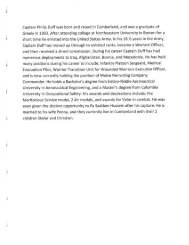 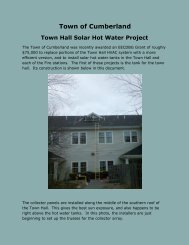 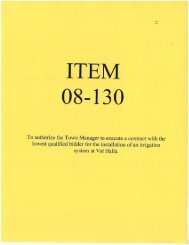 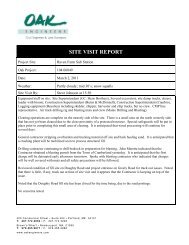 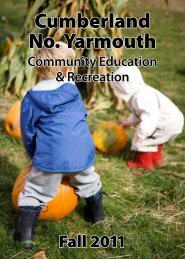 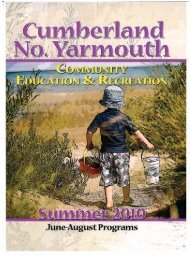 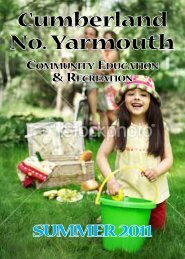 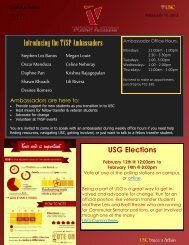 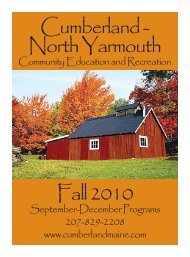 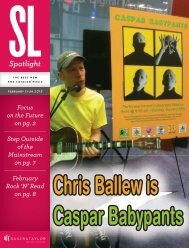