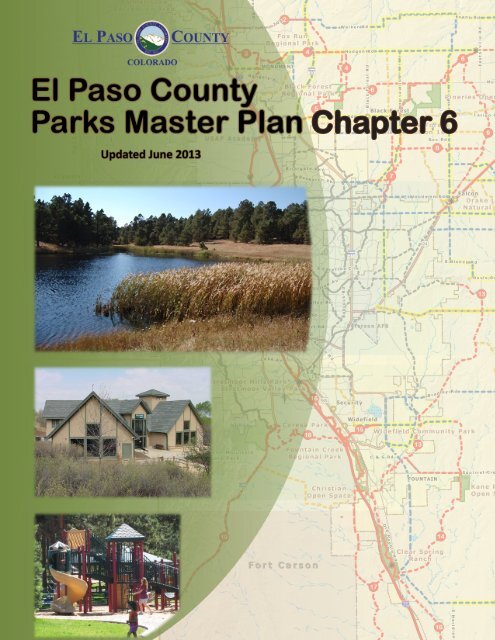 Chapter 6: Population and GrowthEl Paso County has been one of the fastest growing counties in the Rocky Mountain Region and is nowthe most populous County in Colorado, according to the State Demography Office. When this plan waslast updated in 2005, the population was 546,250. The 2010 population was 619,846, an increase ofapproximately nine percent under less than robust economic conditions. Population is concentratedalong the Interstate 25 corridor, with approximately 70 percent of all County residents living in theUrban Core area including and surrounding Colorado Springs. Most of the county residents live in thewestern one‐third of the county.While most of the population lives in cities or towns, a significant number of El Paso County residentslive in unincorporated areas that are developed to urban densities, including military bases. Thesedevelopments present demands on the County to provide public services, including parks and recreationfacilities. Special districts, particularly metropolitan districts, play an important role in providinginfrastructure, including parks and recreation services. The remainder of the county is considered ruraland agricultural − very low populaon densies with the majority of land used for grazing.Due to the large size and high level of diversity in El Paso County, this plan includes importantdemographic analysis in five subareas. The map in Figure 6‐1 identifies each subarea: NortheastNorthwest, Southeast, Southwest, and Urban Core. The Urban Core Subarea is generally within the Cityof Colorado Springs.Figure 6‐1: El Paso County SubareasChapter 6: Population and Growth 51

The population data used in this demographic profile of El Paso County comes from two sources. ThePikes Peak Area Council of Governments (PPACG) provided Transportation Analysis Zone (TAZ)population forecast data for the years 2005 through 2035 (Table 6‐1) TAZ data was also used to createthe County Subarea 2010 population chart in Figure 6‐2. ESRI Business information Solutions, based onthe U.S. Census, is the source of all other demographic data provided in the section. A summary ofdemographic highlights is followed by more detailed demographic analysis.SummaryKey demographic trends for park and recreation planning efforts in El Paso County are summarizedbelow. According to ESRI Business Information Solutions (based on the 2010 U.S. Census), theestimated median household income for El Paso County residents was $54,531 in 2011. The median age for the County in 2010 was 34.1, lower than the median age (37.1) for theUnited States. Gender distribution for El Paso County is 49.8 percent male and 50.2 percent female. In 2010, the Urban Core subarea ranked significantly higher in population than the other foursubareas of the county. The Southeast Subarea had the next highest population, followedclosely by the Northeast subarea. The Southwest and Northwest subareas had much lowerpopulation levels.Demographics by SubareaSeventy‐one percent (71%) of the population of El Paso County lives within the Urban Core Subarea,with a median income of $52,743. The Urban Core is one of the more ethnically diverse subareas and isalso relatively diverse with regard to educational attainment among its residents. The median age forthis subarea is 34.7 with the greatest number of its residents in the 25‐54 age range.The next most populous subarea is the Southeast Subarea, with 12.95 percent of the population and amedian income of $52,548. This subarea has the greatest ethnic diversity, with the largest Hispanicpopulation and one of the largest African American populations of the five subareas. Most of its adultresidents have a high school education or some college with no degree. The median age for theSoutheast Subarea is 33, and as with the urban core, many of its residents are in the 25‐54 age range.The Northeast Subarea houses 9.4 percent of the El Paso County population with a median income of$94,539. The Northeast is the least diverse subarea with a 91 percent Caucasian population. Thissubarea also has the most residents with college and graduate degrees. The Northeast also has theoldest population of the subareas, with a median age of 40.3 and the greatest populations in the 35‐74age range.52 El Paso County, Colorado | Parks Master Plan

Age DistributionThe median age in 2010 for El Paso County was 34.1. A comparison of the planning areas as well as thecounty as a whole is illustrated in Figure 6‐3.Figure 6‐3: 2011 El Paso County and Subarea Population Breakdown by AgeSource: 2010 U.S. Census; 2011 estimates provided by ESRI Business Information Solutions, 2011.The Urban Core and Southeast Subareas most closely mirror the age distribution pattern for the Countyas a whole, showing the greatest number of residents in the 25‐54 age range, with each of the threecohorts this range represents approaching 15 percent.The Northwest Subarea reflects the greatest number of young residents, those in the 15‐19 and 20‐24age cohorts, at 15.8 percent and 24.3 percent, respectively.The Southwest follows as the next youngest area with its greatest residential numbers in the 20‐24 age(18.1%) and 25‐34 age (18.8%) cohorts.The Northeast area has the largest residential population in the 35‐74 age range, with 14.4 percent inthe 35‐44 age cohort, 19.5 percent in the 45‐54 age cohort, and 13.7 percent in the 65‐74 age cohort.Household IncomeThe estimated 2011 median household Income for El Paso County residents was $54,531. Figure 6‐4demonstrates the full income distribution for El Paso County. Figure 6‐5 reflects the median income foreach subarea and for the county as a whole.The Northeast area has the highest median household income in the county in 2011, estimated at$94,539, with over 25 percent of the population having income in the $100,000 ‐ $199,999 range.The median household income for the Northwest area was estimated at $58,496 with the most broadlydistributed income range in the county.Chapter 6: Population and Growth 55

The Southeast and Urban Core subareas each had median income in the $52,000‐$53,000 range. Over25 percent of the population in the Southeast area and 20 percent of the Urban Core had income levelsin the $50,000‐$74,999 cohort.Data for the Southwest area reflected the lowest median income at $40,318, with over 61 percentearning under $50,000.Figure 6‐4: Annual Household Income DistributionSource: ESRI Business Information Solutions, 2011.Figure 6‐5: Median Income in 2011 (Estimated based on 2010 U.S. Census)Source: ESRI Business Information Solutions, 2011.56 El Paso County, Colorado | Parks Master Plan

EducationAccording to a new U.S. Census Bureau study, education levels had more effect on earnings over a 40‐year span in the workforce than any other demographic factor, such as gender, race, and ethnic origin.As Shown in Figure 6‐6, ESRI’s forecasts from the U.S. Census estimate that the highest rankingcohorts county‐wide in El Paso County are “high school graduate” (23.8%) and “some collegeeducation, no degree” (24.2%). Those residents that earned a bachelor’s degree follow with 21.6percent of the population.The Northeast Subarea has the highest percentage of those with a graduate or professional degree(21.6%) and with a bachelor’s degree (28.5%).The Southeast Subarea has the highest percentage of residents with a high school degree (32.7%).Figure 6‐6: Educational Attainment for El Paso County (ages 25+)CountywideNorthwestGraduate/ProfessionalDegreeBachelor's DegreeSouthwestAssociate DegreeSoutheastSome College, No DegreeNortheastHigh School GraduateUrban Core0.0% 10.0% 20.0% 30.0% 40.0%9th to 12th Grade, NoDiplomaSource: 2000 U.S. Census, 2010 Forecast by ESRI Business Information Solutions.Race/EthnicityThe current ethnic breakdown for the County shows that a high percentage (79.7%) of El Paso Countyresidents are Caucasian. Countywide, the next highest racial/ethnic cohort is Hispanic Origin (any race)at 15.3 percent with African‐American following at 6.2 percent. In the five El Paso County subareas, asshown in Figure 6‐7, ethnic diversity is greater in the Southeast subarea (with 17.2 percent Hispanicpopulation).The Urban Core and Southwest also have over 15 percent Hispanic population.The greatest African‐American populations are in the Southwest (8.3%) and Southeast (8.2%) SubareasThe least amount of diversity is found in the Northeast subarea (91.1% Caucasian).Chapter 6: Population and Growth 57

Figure 6‐7: Ethnicity by SubareaSource: ESRI Business Information Solutions, 2011 estimate from 2010 U.S. Census.Growth and Land UseWhile most of the population lives in cities or towns, some El Paso County residents live inunincorporated areas that are developed to urban densities. These areas defined as having lot sizes ofless than 2.5 acres. In 1990, the number of people living in urban density developments withinunincorporated areas of the County was estimated by the County Development Services Department tobe approximately 65,000. By 2003, that number had increased to approximately 90,000 (El Paso CountyDevelopment Services Department 2005). As of 2011, there were almost 169,000 residents inunincorporated El Paso County (City of Colorado Springs 2013). About 25 percent of the unincorporatedurban area residents live on military reservations.The County subdivision regulations require that lots smaller than 2.5 acres be served by central waterand sewer systems. “Rural residential” developments of 2.5 acres or larger continue to be popular withdevelopers and homeowners because they offer a perceived rural lifestyle that lacks typical cityproblems such as noise and traffic. However, these low density developments present demands on theCounty to provide municipal‐level services, including parks and recreation facilities. Park fees, requiredby the County of developers at the time of subdivision of residential lots, are the primary source offunding for development of regional park facilities. If not served by regional facilities, recreationalamenities for residents of unincorporated areas may be limited to those provided in a school yard or, insome cases, a small town square.58 El Paso County, Colorado | Parks Master Plan

Rural residential subdivisions are concentrated in the Black Forest, Tri‐Lakes, Falcon/Peyton vicinity,Highway 94, Ellicott Valley, Security/Widefield and along Highway 115. Some of these areas, particularlyFalcon and the Widefield area, have experienced rapid growth since the last Master Plan update in2005.Special districts are the primary mechanism for provision of public services when not provided by localgovernment in the unincorporated areas. There are 101 metropolitan districts in El Paso County at thistime and three recreation districts, the Ellicott Recreation District, Tri‐Lakes Park and Recreation District,and Widefield Park and Recreation District. The larger, well‐established metropolitan districts, such asMeridian Service Metropolitan District and Woodmen Hills Metropolitan District, assess residents andprovide park and recreation facilities and services, filling an important niche in central and eastern ElPaso County.Besides special districts serving mostly local residents and the County with its focus on regional facilities,there are few mechanisms in place to provide, maintain, and operate the finer grain of local parks, trails,open space, and recreation services for residents of some unincorporated areas. The Goals andObjectives in Chapter 8 address how the Master Plan is intended to provide an overall vision and toidentify gaps so that the County, local jurisdictions, and others can work together to fill them. Futureupdates to this Master Plan may need to include a more comprehensive level of service analysis to fullyaddress parks and recreation gaps and needs.The remainder of the County is considered rural with very low population densities, and the majority ofland is used for grazing. The eastern and southeastern portions of the county have the fewest residentsof all the regions in the county. A portion of eastern El Paso County has been divided into 35 acre (orslightly larger) parcels, as this type of development does not require county review and approval. Nodata is available that shows the location and extent of 35 acre developments within the county;however, the County Development Services Department estimates that less than nine percent of thetotal privately‐owned land area in El Paso County is occupied by this development pattern (El PasoCounty Development Services Department 2005).Chapter 6: Population and Growth 59 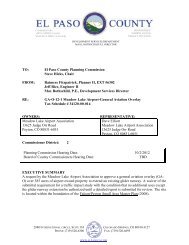 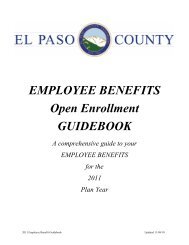 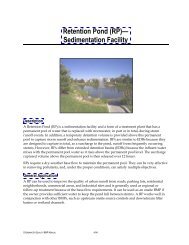 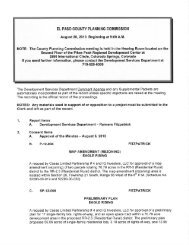 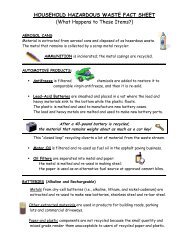 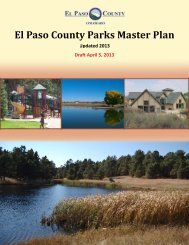 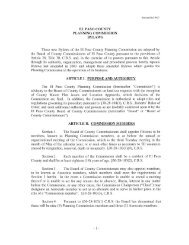 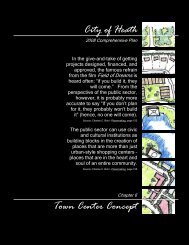 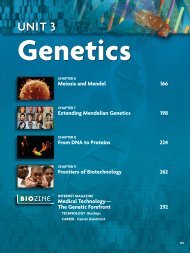 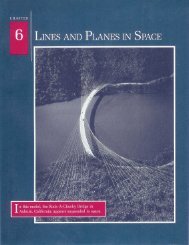 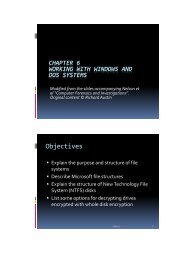 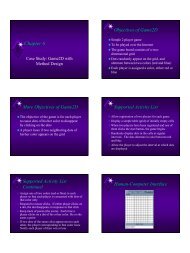