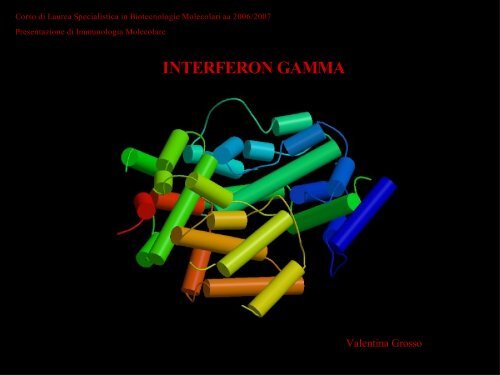 The Inteferons1957: Isaacs and Lindenmann discovered a substance that protected cells from viral infectionInterferon (IFN)- Found only in vertebrates; small proteins 143 - 172 aa ranging from 19 to 45 kDa, modifiedby glycosylation;- Prototypes for the clinical development of other cytokines;- Their metabolism and excretion take place mainly in the liver and kidneys.They rarely pass the placenta and the blood brain barrier;- Synthesized when induced by viral or other challenges by specialized cells, subsequentlysecreted, and bind to highly specific receptors on target cells.This specific interaction with its receptors causes the signal transduction to the nucleusand thus regulates the production of about 50 different genes;- Interferons are a group of cytokines with important activities: - immunomodulatory- antiviralα leukocytes- antiangiogenicHPLC β- antiproliferativefibroblasts- antitumorγ immune cells: - NK,- T lymphocytes (CD4+, CD8+ cells)

The structure of human IFN-γ• The IFN-γ gene is located onchromosome 12 and codes for a 17kDa protein, which then undergoesposttranslational glycolysisconverting the IFN-γ to a 20-25kDa glycoprotein.• IFN-γ exists as noncovalentlylinkedhomodimers; the others aremonomers.• The protein shares no significanthomology with IFN-β or thevarious IFN-α family proteins.• IFN-γ is approximately 64% and4% identical in its aa sequence tocanine and mouse IFN-γ ,respectively, and is highly speciesspecific.http: //www.ncbi.nlm.nih.gov/Structure/

Evolution of IFN-γ• IFN-γ has been maintained as asingle gene with presumably constantfunction and evolutionary pressure• No homolog of IFN-γ has beenobserved in frogs and in fish genomes,implying that type II IFN functionbecame essential during tetrapodevolution, though its origin may beconsiderably earlier.Pestka S. et al., Interferons, interferon-like cytokines, and their receptors, Immunological R eviews, 202:8, 2004

…IFNγ is a pro-inflammatory cytokine, intimately involved in the innate and acquired immuneresponses:• IFNγ constitutes a warning signal produced by the host, and participates in an amplificationloop to rapidly alert neighbouring cells, as well as effector cells of the innate immune system,to possible infection.• IFNγ signalling: - upregulation of pathogen recognition;- induction of an antiviral state;- inhibition of cellular proliferation and modulation of apoptosis;- acquisition of microbicidal effector functions.• One of the most important functions of IFNγ is to sensitise macrophages to activation bychallenge with pathogen products.Indeed, IFNγ was originally named ‘‘macrophage - activating factor’’.

IFNγ system dysfunction• Patients with inactivating mutations of the human IFNGR1 or IFNGR2 chains andIFNγ -/- and IFNGR1 -/- mice showed no developmental defects, and their immune systemappeared to develop normally, but these patients show deficiencies in natural resistance tobacterial, parasitic, and viral infections.• Infants with deficient production of IFNγ exhibited decreased neutrophil mobilityand NK cell activity, highlighting the importance of IFNγ in the inflammatory responseand immunoregulation.• His function is significant in tumor surveillance and also as IFN-γ is vitally implicated in theregulation of immune response, its production can lead to autoimmune disorders.

IFNγ and development of Th1 response• IFNγ is a major product of Th1 cells and influences naive CD4+ cell differentiationtoward a Th1 phenotype.• During the primary response to antigen, IL-12 and IFNγ coordinate the link between pathogenrecognition by innate immune cells and the induction of specific immunity, by mediatinga positive feedback loop to amplify the Th1 response.LPS recognise - macrophages,- DCs- neutrophilsIL12productionIFNγ secretion in - naive CD4+ T cells- NK cellspositive feedbackinhibits IL-4 secretionby Th2 populationsImportant in initiation or stabilization of the Th1response

IFNγ: promoter or inhibitor of Th1 responses?• The initial activation/expansion phase of CD4+ T-cell responses is followed by a death phaseduring which most (90%) effector cells are eliminated. This is a complex processthat likely involves multiple mechanisms, including: - Fas-FasL and (TNF)–TNFRI/II interactions,- cytokine withdrawal,- nitric oxide,- tryptophan catabolism,- Tim-3-galectin-9 pathway,- IFNγ -mediated death• IFNγ have different roles in regulating Th1responses depending on the stage of theresponse and the activation state ofCD4+ T cells;• At the initiation of a response:IFNγ enhances the differentiation ofTh1 cells to generate effectors capable ofproviding protection against infection.• Th1 response transitions from effector to memory phase: IFNγ mediates the death of Th1.This type of negative regulation later in the response could be serve to minimize the potential risk ofautoreactivity that would be associated with sustaining a high frequency of activated Th1 effector cells.Foulds K.E. et al., Th1 memory: implications for vaccine development, Immunological R eviews, 211:58, 2006

Schroder K. et al., Interferon-γ :an overview of signals, mechanisms and functions, Journal of Leukocyte Biology, 75:163,2004The IFNγ induced antiviral state• The IFN system regulates innate and adaptive immunity to viral infection.• Although types I and II IFN are crucial in the immediate cellular response to viral infection,the immunomodulatory activities of IFNγ become important later in the responsein coordinating the immune response and establishing an antiviral state for longer term control.

Indoleamine 2,3 dioxygenase (IDO)• IDO is rate-limiting enzyme in the degradation of the essential amino acid tryptophan via thekynurenine pathway to form N-formyl-kynurenine, which is subsequently converted to niacin.Thereby, growth of microbes and tumor cells is affected, because tryptophan deprivation limitsprotein biosynthesis.• IDO is expressed, particularly by IFNγ, in multiple cell types: - fibroblasts- macrophages- DC- trophoblasts- epithelial cells• For many years has been considered as an innate defence mechanism limiting growth ofviruses, bacteria, intracellular pathogens and malignant cells by withdrawing tryptophan fromthe microenvironment. Recently, it has been shown that activation of IDO is also criticallyinvolved in the regulation of immune responses.• If the immune system is unable to eliminate the malignant tumor cells, immune activation maypersist, which causes overproduction of IFN-γ. One consequence for these detrimental IFN-γeffects might be increased tryptophan depletion, which can affect T-cell responses and thuscontribute to the development of immunodeficiency in cancer patients.

When the acute immune response cascade has failed to completely destroy foreign tissuestructures, the anti-proliferative enzyme systems (the degradation of tryptophan by IDO, the production ofROS, of NO and ONOO-) are chronically up-regulated by IFNγ together withTNF-α. Moreover, cancer cells stimulated by the cytokines themselves become a relevant source oftryptophan degradation. As a consequence also metabolism of normal cells more and more begins to sufferfrom symptoms linked with IFNγ over-expression namely anemia, cachexia, depression, immunodeficiencyand higher risk of infection and sepsis.Although IFN-γ is a centralpro-inflammatory cytokine,evidence increasinglyindicates that it is alsoinvolved in thedevelopment of tumorimmune escape, toleranceinduction and impairedimmune functions byactivating a negativefeedback loop.Brandacher G. et al., Antitumoral Activity of Interferon-γ Involved in Impaired Immune Function in Cancer Patients,Current Drug Metabolism, 7:599, 2006