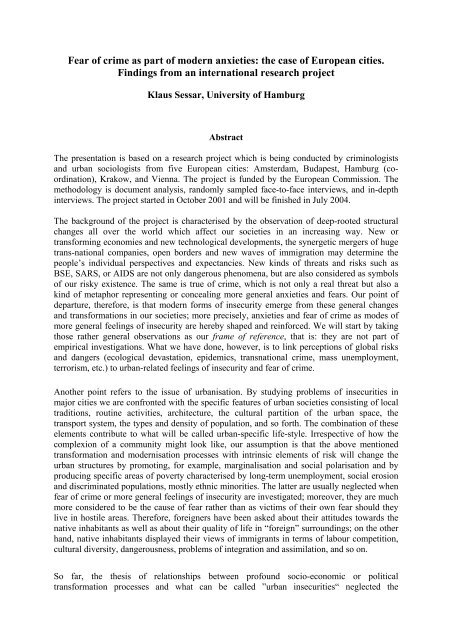 Fear of crime as part of modern anxieties: the case of ... - Istat.it

Fear of crime as part of modern anxieties: the case of ... - Istat.it

Fear of crime as part of modern anxieties: the case of European cities.Findings from an international research projectKlaus Sessar, University of HamburgAbstractThe presentation is based on a research project which is being conducted by criminologistsand urban sociologists from five European cities: Amsterdam, Budapest, Hamburg (coordination),Krakow, and Vienna. The project is funded by the European Commission. Themethodology is document analysis, randomly sampled face-to-face interviews, and in-depthinterviews. The project started in October 2001 and will be finished in July 2004.The background of the project is characterised by the observation of deep-rooted structuralchanges all over the world which affect our societies in an increasing way. New ortransforming economies and new technological developments, the synergetic mergers of hugetrans-national companies, open borders and new waves of immigration may determine thepeople’s individual perspectives and expectancies. New kinds of threats and risks such asBSE, SARS, or AIDS are not only dangerous phenomena, but are also considered as symbolsof our risky existence. The same is true of crime, which is not only a real threat but also akind of metaphor representing or concealing more general anxieties and fears. Our point ofdeparture, therefore, is that modern forms of insecurity emerge from these general changesand transformations in our societies; more precisely, anxieties and fear of crime as modes ofmore general feelings of insecurity are hereby shaped and reinforced. We will start by takingthose rather general observations as our frame of reference, that is: they are not part ofempirical investigations. What we have done, however, is to link perceptions of global risksand dangers (ecological devastation, epidemics, transnational crime, mass unemployment,terrorism, etc.) to urban-related feelings of insecurity and fear of crime.Another point refers to the issue of urbanisation. By studying problems of insecurities inmajor cities we are confronted with the specific features of urban societies consisting of localtraditions, routine activities, architecture, the cultural partition of the urban space, thetransport system, the types and density of population, and so forth. The combination of theseelements contribute to what will be called urban-specific life-style. Irrespective of how thecomplexion of a community might look like, our assumption is that the above mentionedtransformation and modernisation processes with intrinsic elements of risk will change theurban structures by promoting, for example, marginalisation and social polarisation and byproducing specific areas of poverty characterised by long-term unemployment, social erosionand discriminated populations, mostly ethnic minorities. The latter are usually neglected whenfear of crime or more general feelings of insecurity are investigated; moreover, they are muchmore considered to be the cause of fear rather than as victims of their own fear should theylive in hostile areas. Therefore, foreigners have been asked about their attitudes towards thenative inhabitants as well as about their quality of life in “foreign” surroundings; on the otherhand, native inhabitants displayed their views of immigrants in terms of labour competition,cultural diversity, dangerousness, problems of integration and assimilation, and so on.So far, the thesis of relationships between profound socio-economic or politicaltransformation processes and what can be called ”urban insecurities“ neglected the

individuality of the selected cities. Each of them has its own specific socio-cultural andtraditional characteristics (including socio-spatial factors), “its own soul”, which makes itunique. Thus, it is assumed, and is an essential part of our research design, that the cities (theresidents and the policy-makers) produce rather different methods and qualities of observing,assessing and coping with risks, insecurities and anxieties. This is especially true for Westerncities on the one hand, and cities from the former Eastern bloc on the other hand. Therefore,the study should give us essential clues to the social and cultural diversity of European cities,both in terms of the awareness, closeness and intensity of risks and dangers, the developmentof fear of crime and the ways of coping with it. Therefore, we expect to meet differentcultures of insecurities in the five cities as well as different cultures of handling them. Thosedimensions are part of the comparative approach of the project. The numerous difficulties ofsuch an enterprise have not been neglected. They have, among other things, to do withdifferences of the legal, social, and administrative systems, with different communal (andnational) governance-structures, but especially with the unequal chances of modernisationowing to the Iron Curtain. But these differences are also the main challenge of such a study asthey allow to yield more forceful generalisations when it comes to developing problemorientatedcoping strategies with respect to insecurities, anxieties and fear.The method is a three-step design consisting of a macro-level (the city), a meso-level (thedistrict) and a micro-level (the neighborhood). These three spatial dimensions are investigatedby employing different methods. For the city, a “problem profile” was developed with thehelp of official data and by interviewing “city experts”. From there, two districts with severesocial problems were selected (e.g. high rates of unemployment, ethnic conflicts). In thesedistricts face-to-face interviews with randomly selected respondents were carried out (approx.500 interviews in every district). The questionnaire was standardised in a way that makescomparisons between the cities for most of the variables possible. It was developed in Germanwith the participation of all partners and then translated into Polish, Hungarian, Dutch, andTurkish. (An English translation also exists, so that we were able to give the EuropeanCommission and the International Advisory Board evidence of our research efforts. It is notused in the field but is waiting to be applied by other partners from the English-speakingworld in order to extend and enrich our project: www.insec.uni-hamburg.de). Finally, about50 to 70 in-depth-interviews with respondents from the surveys are on the way to beingaccomplished on a neighborhood level in each city, in order to learn more about their lifeworldand their general and special fears and anxieties, especially how they perceive and useor avoid the urban space in view of risks and dangers. It is expected (and is part of theresearch design) that surveys from the interviews followed by in-depth-interviews with thesame respondents will be complementary to each other in such a way that more profoundinformation and insights can be gathered, than through the isolated use of each of theinstruments.In a way one can say that we are studying the city (more precisely: some districts of the city)by using the attitudes of their citizens like glasses through which we observe the deficienciesof the cities in regard to the safety of their citizens.The presentation is mainly based on the survey part of the project. It gives an overview ofsome cross-cultural phenomena in terms of the respondents’ perception of global risks anddangers and the way in which they are afraid of crime or other problems which may affecttheir quality of life. In a second step, some empirical results, again with respect to the issuesof fear and insecurity, from one district in the city of Hamburg (Wilhelmsburg) will bedisplayed. This district has a 40% population of mostly Turkish people; therefore, remarkabledifferences of the attitudes between them and the German inhabitants should be expected. 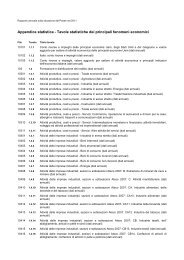 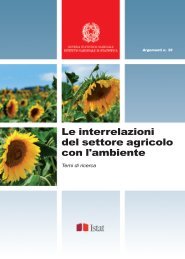 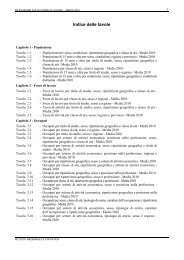 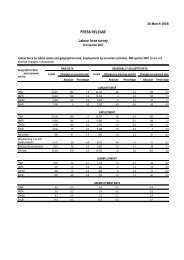 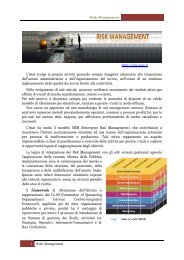 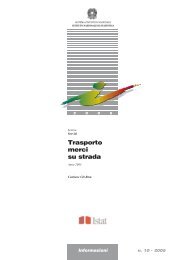 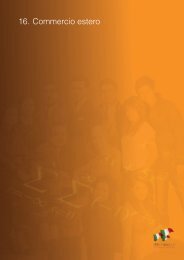 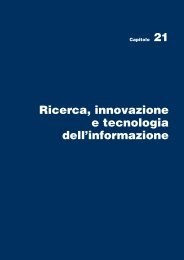 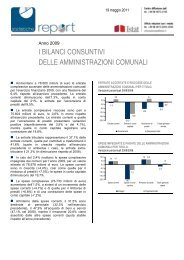 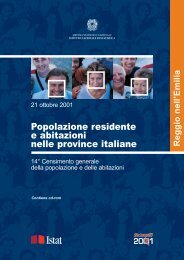 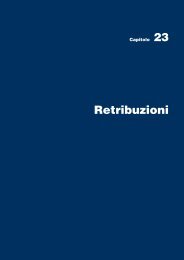 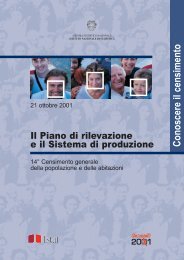 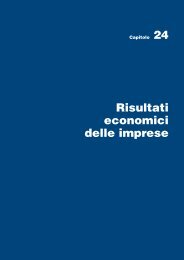 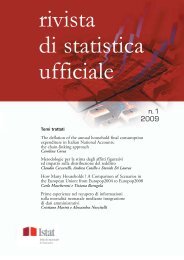 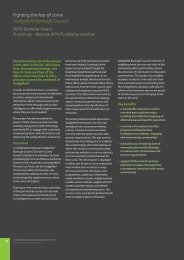 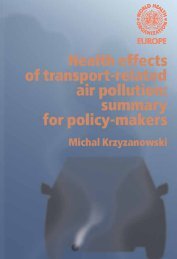 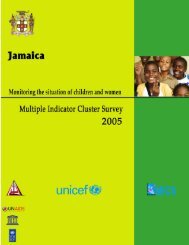 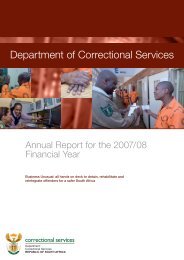 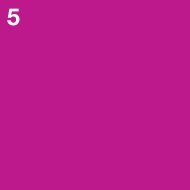 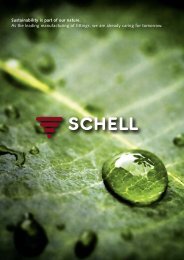 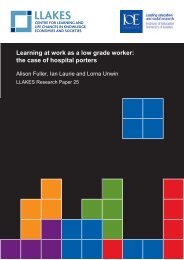 Magazine: Fear of crime as part of modern anxieties: the case of ... - Istat.it