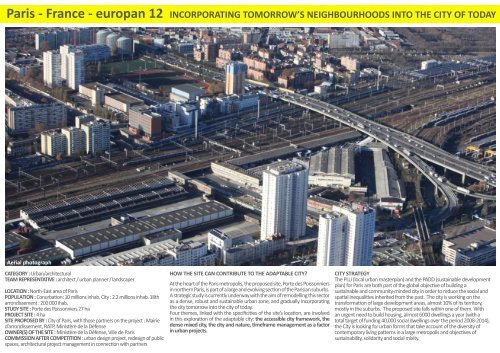 europan 12 - France - ParislAerial photograph of the study siteAerial photograph of the project siteSITE DEFINITIONSituated at the interface between Paris and its inner suburbs, the study area fallswithin a 200 ha project zone within Paris: “Paris North, North-East”. It is near Portede la Chapelle, one of the main gateways of Paris, a point where the inner ring-road(Boulevard Périphérique) meets the A1 motorway. It is located in the strategic axisof the new Greater Paris centres, between the two station hubs of Gare du Nordand Gare de l’Est and the future Pleyel - Saint Denis multimodal station. It will ultimatelyenjoy excellent public transport provision.Located on the edge of the former suburban districts, Porte des Poissonniersconsists of a traditional urban fabric, the footprint of large industrial activities and1960s-1970s urban projects such as social housing, amenities, stadiums, separatedby major infrastructures, roads and railways.For the Europan competition, the remit is to explore two scales: the first is thestudy site covering 27 hectares, notably including a large 8 hectare plot belongingto the RATP (independent Paris transport board) and, within this study area, a 4hectare project site encompassing development land belonging to the Ministry ofDefence, and its immediate surroundings.ADAPTABILITY : MAIN ELEMENTS TO TAKE INTO ACCOUNTThe site raises the question of transforming and adapting a dense cityfabric. The conversion of this area will focus on the transformation ofthe interstices and large land areas. Urban changes will need to take intoaccount the existing functions that the city needs to retain. The possibilitiesfor change in this sector must harmonise with both the metropolitanand the local scale, by fostering the establishment of a strong urbanframework to support the development of a dense and mixed fabric thatwill allow the emergence of new neighbourhoods and more dynamicand diverse economic activity.The remit is to reconcile a certain density and diversity of complementaryfunctions and uses with a priority on housing: a social and generationalmix, with corresponding local amenities and services, together with activitiesthat contribute to a rich neighbourhood life.The candidates will need to think about the metropolitan dimension andput forward proposals that operate at two different scales:- The urban strategy: response at the scale of the study zone for whichthey need to propose a strategy illustrated by one or more scenariosfor spatial change. The remit here is above all to think about potentialshort-term, medium-term and long-term changes to the area through anaction strategy that links the themes and options described above, andharmonises them with the richness and complexity of the existing fabric.- A sustainable and adaptable neighbourhood: response at the scaleof the project site, with urban and architectural proposals that prioritiseresidential functions, with a varied range of housing, and ideas fornew sustainable neighbourhoods in the dense city, with open spaces andbuildings adapted to modern living patterns, founded on social relationsbased on solidarity, communication, community 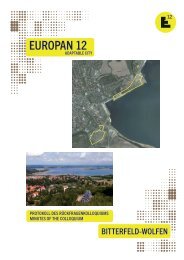 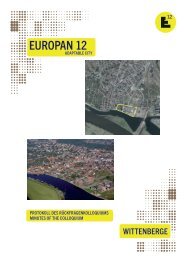 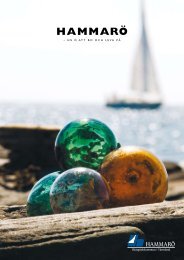 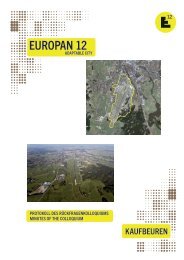 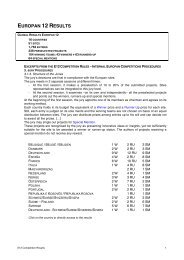 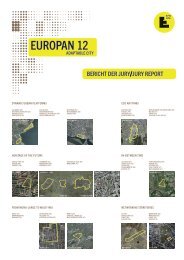 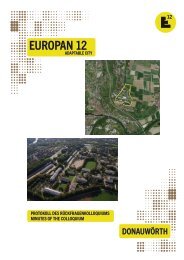 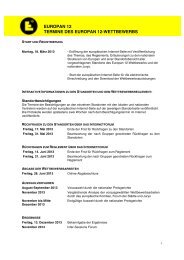 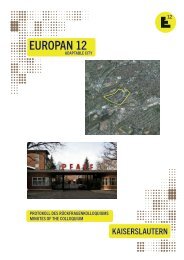 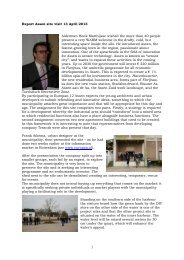 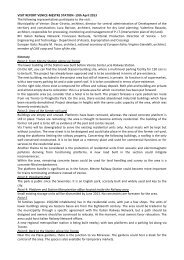 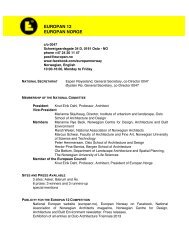 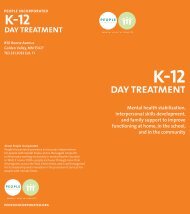 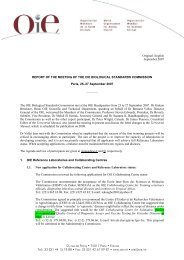