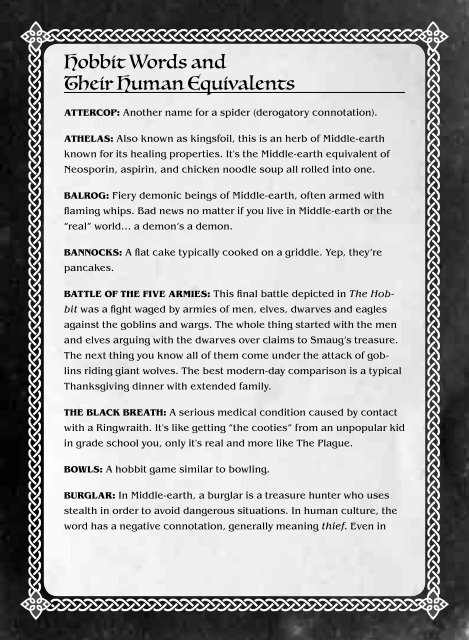 Hobbit Words and Their Human Equivalents

Hobbit Words and Their Human Equivalents

Hobbit Words andTheir Human EquivalentsAttercop: Another name for a spider (derogatory connotation).Athelas: Also known as kingsfoil, this is an herb of Middle-earthknown for its healing properties. It's the Middle-earth equivalent ofNeosporin, aspirin, and chicken noodle soup all rolled into one.Balrog: Fiery demonic beings of Middle-earth, often armed withflaming whips. Bad news no matter if you live in Middle-earth or the“real” world… a demon’s a demon.Bannocks: A flat cake typically cooked on a griddle. Yep, they’repancakes.Battle of the Five Armies: This final battle depicted in The Hobbitwas a fight waged by armies of men, elves, dwarves and eaglesagainst the goblins and wargs. The whole thing started with the menand elves arguing with the dwarves over claims to Smaug’s treasure.The next thing you know all of them come under the attack of goblinsriding giant wolves. The best modern-day comparison is a typicalThanksgiving dinner with extended family.The Black Breath: A serious medical condition caused by contactwith a Ringwraith. It's like getting “the cooties” from an unpopular kidin grade school you, only it's real and more like The Plague.Bowls: A hobbit game similar to bowling.Burglar: In Middle-earth, a burglar is a treasure hunter who usesstealth in order to avoid dangerous situations. In human culture, theword has a negative connotation, generally meaning thief. Even in

Middle-earth the term burglar is rather distasteful to hobbits becauseof their aversion to adventure.Cave trolls: A breed of trolls specialized for dwelling in tunnelsand caverns.Coney: Another word for a rabbit.Cram: A type of dwarven bread used in Middle-earth for long travels.Similar to hardtack, which is a type of biscuit or cracker that hasa long shelf life and was often used by sailors or the military. Cram isthe cause of many broken teeth.Dwarves: Dwarves are short, hardworking folk. Typically miners bytrade, dwarves are experts at hard work such as digging and building.In human culture, dwarves would be tradesmen—contractors,carpenters, plumbers, and the like. Useful people to have around,dwarves.Elves: The elves of Middle-earth are wise and beautiful beings. Theelves hold the secrets of the West, are immortal, and generally havetheir shit together. In human culture, elves would be the celebrities,models, rock stars, and the Hollywood elite—the in-crowd, soto speak.Ents: An ancient race of anthropomorphic treelike creatures whodwell in the forests of Middle-earth. They are patient and cautious.They take their time to make a decision about anything. In your dayto-daylife, dealings with hippies or granolas might be similar to conversingwith Ents.Fallohides: A subrace of hobbits who are tall (for hobbits) and fairhairedwith a light complexion. In today’s world, Fallohides would bethe hobbit elite (as far as that goes for hobbits, which is nothing comparedto elves).Faunt: A young hobbit (two to five years in age). A faunt is the hobbitequivalent of a toddler.Fellowship: A fellowship is generally a group of friends or allieswho band together in support of a common cause. They swear oathsand make lofty rallying speaches. Today’s equivalent of a fellowshipwould likely be an LLC or a group of shareholders.Goblins: Violent creatures who live in dark places, often underground.In human culture, goblins would likely be criminals who livein the sewers and subway tunnels. Also see "Orcs."Halfling: Another term for a hobbit. The term is in reference to theirsize, which is roughly half the size of humans. It’s not recommendedto use this term in human culture to refer to anyone, no matter theirsize, as it would likely be offensive.Halfling’s Leaf: A slang term for pipeweed, the tobacco cultivatedby hobbits.Harfoots: A subrace of hobbits who are the smallest in stature ofthe hobbits. Not that there’s anything wrong with that.Helm’s Deep: The site of one of the largest and most important battlesin The Lord of the Rings. Not to be mistaken for a typical Saturdayat your local grocery store.Hobgoblins: In Middle-earth a hobgoblin may refer to a larger andstronger breed of goblin or orc. See also "Uruk-hai."Hobbit hole: This refers to a hobbit’s home—usually a comfortablehome built into the side of a hill. Hobbit holes are quite cozy and wellfurnished. In human culture, many energy-efficient homes, such asadobe houses, are similar in idea to the hobbit-hole.

Imp: The offspring of a creature such as a goblin or an orc. In the humanworld, imps can often been found running unsupervised throughyour local International House of Pancakes.Kingsfoil: A healing herb. See Athelas.Lembas: An elven bread, similar to hardtack or the dwarves’ cram,only tastier and more nutritious. As you know from comparing shortbreadcookies to the fudge stripe variety, elves can make anythingtaste better.Longbottom Leaf: A variety of pipeweed grown in a region of theShire known as Longbottom.Mathoms: A hobbit word for a regifted gift. Did you ever play the holidaygift exchange game where you keep selecting gifts until no oneends up with what they wanted, and then everyone takes it to the nextholiday party they have to go to? It’s pretty much exactly that.Mince-pies: Hobbits are fond of hearty food such as these pies filledwith chopped meat. In today’s harried world, a chicken potpie mightbe a fair comparison.Mithril: An incredibly strong lightweight material often made intochain mail armor. Mithril is like the Kevlar of Middle-earth.Moon Letters: Elvish runes that can be seen only when the moonshines upon them. A human equivalent might be writing something ininvisible ink to be decoded with lemon juice.Mordor: As the dwelling place of the Dark Lord Sauron, Mordor isa barren land covered with rock, ash and little vegetation. It’s a hiveof villainy, debauchery, and lies. Imagine if you combined Las Vegas,Washington D.C., and Hell into one and then threw in a couple of volcanoes.The result would be Mordor.Nazgul: Also known as Ringwraiths. These were men who succumbedto the power of the Dark Lord Sauron when presented withRings of Power. The rings corrupted their minds and they becameobsessed with attaining the one true ring. Today one might akin theNazgul to politicians in a primary race, blindly seeking a seat of power,speaking lies, and making frightening desperate attempts to graspa power they shouldn’t be allowed to wield.Necromancer: A dark wizard. One who practices dark arts. Themodern-day human equivalent is probably a CEO of a technologycompany.Ninepins: A hobbit game similar to bowling.NÚmenÓreans: Men from a distant land who introduced tobaccoto the hobbits. Today men who peddle tobacco are still targeting littlepeople (first hobbits, now tweens and teens) in an attempt to getthem hooked on the nasty habit. Some things never change.Old Toby: A variety of pipeweed.Ogres: Monsterous giants who are fond of feasting on flesh. Today’sogres prefer combo meals from drive-through windows.Orcs: Similar to goblins, orcs are large violent creatures. In humanculture you might think of orcs as street thugs who travel in groupslooking for victims.Palantiri: These are magical “seeing stones” of Middle-earth. Similarto a crystal ball, they are used to see other parts of the world or tocommunicate with (or influence) those who also have a palantiri. Todaywe accomplish the same thing with Skype.

Quoits: A hobbit game similar to horseshoes or cornhole.Rangers: Men who patrolled the wilderness armed with swords,spears, and bows. They typically wore earth tones and dark cloaks.Today you can still find Rangers at your local renaissance fair.Rings of Power: Magical rings created by Sauron and gifted toElves, Dwarves and Men with One Ring with the power to rule all others.These gifts of power tempted the wearers and brought the racesof Middle-earth under the throng of Sauron. At first the rings seemedgood and were able to do really cool things, but eventually they beganto corrupt anyone who used them, driving them to obsession andinsanity. You know, kind of like a smart phone.Ringwraiths: Men driven insane under the throng of the rings ofpower. Also known as the Nazgul.Rivendale: An Elf community often thought to be the most hospitableand wonderful place in Middle-earth. Kind of like a Middle-earthDisney World. Only maybe without the rides. Or the long lines.Seed-cake: A dense cake of bread with one or more varieties ofseeds baked into it. Today’s equivalent might be an “everything” bagel.Shire, the: The Shire is home to the hobbits. More than just a placeto live, the Shire is a place of significance. Think of your own childhoodhome, or a special place where you felt most relaxed and comfortable,and you’ll have an idea of how the hobbits regard the Shire.We should all be so lucky as to live in such a place.Skin-changer: A person who can turn into another creature, suchas a bear. In The Hobbit, Bilbo and the dwarves are allowed to staywith Beorn, a skin-changer who shows his guests hospitality in returnfor hearing their tale of adventure. Today people might think ofa skin-changer as a were-creature (such as a werewolf, or the NativeAmerican skin-walker).Southern Star: A variety of pipeweed.Stone giants: Large, unintellegent creatures that hurl massivestones at one another for fun. Stone giants today would likely be prowrestlers.Stone trolls: A breed of trolls that turn to stone in direct sunlight.Unfortunately this probably doesn't apply to the trolls you know.Stoors: A subrace of hobbits who are stocky and broad chested.In today’s world, Stoors would be considered the blue-collar class ofhobbits.Tomnoddy: A foolish being. The equivalent of calling someone a“big dummy.".Trolls: Trolls are large, dull creatures. They have plenty of physicalstrength but aren’t very clever. They are typically crude and loud. Inhuman culture they aren’t much different. You’ve probably met yourshare of trolls in noisy pubs, at sporting events, or on their smartphonesat the movies.The Undying Lands: This is a sort of promised land for elves wherethey would spend their immortal lives, usually after already havinglived a long life in Middle-earth. It's like a retirement community forelves.Uruk-hai: An advanced breed of orcs or goblins. If orcs are the thugsof MiddleEarth, you might think of the Uruk-hai as a wellorganizedstreet gang.Viols: Stringed musical instruments, similar to violins.

Wargs: Large wolves that are sometimes ridden by orcs or goblins.Water-skin: A leather bag made to hold water—the Middle-earthequivalent of a water bottle or canteen.Wights: Wraiths or ghostlike creatures of Middle-earth.Worm: (Also Wyrm). Another word for dragon (derogatory).

<strong>Hobbit</strong> <strong>Words</strong> <strong>and</strong><strong>Their</strong> <strong>Human</strong> <strong>Equivalents</strong>Attercop: Another name for a spider (derogatory connotation).Athelas: Also known as kingsfoil, this is an herb of Middle-earthknown for its healing properties. It's the Middle-earth equivalent ofNeosporin, aspirin, <strong>and</strong> chicken noodle soup all rolled into one.Balrog: Fiery demonic beings of Middle-earth, often armed withflaming whips. Bad news no matter if you live in Middle-earth or the“real” world… a demon’s a demon.Bannocks: A flat cake typically cooked on a griddle. Yep, they’repancakes.Battle of the Five Armies: This final battle depicted in The <strong>Hobbit</strong>was a fight waged by armies of men, elves, dwarves <strong>and</strong> eaglesagainst the goblins <strong>and</strong> wargs. The whole thing started with the men<strong>and</strong> elves arguing with the dwarves over claims to Smaug’s treasure.The next thing you know all of them come under the attack of goblinsriding giant wolves. The best modern-day comparison is a typicalThanksgiving dinner with extended family.The Black Breath: A serious medical condition caused by contactwith a Ringwraith. It's like getting “the cooties” from an unpopular kidin grade school you, only it's real <strong>and</strong> more like The Plague.Bowls: A hobbit game similar to bowling.Burglar: In Middle-earth, a burglar is a treasure hunter who usesstealth in order to avoid dangerous situations. In human culture, theword has a negative connotation, generally meaning thief. Even in 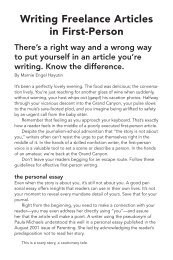 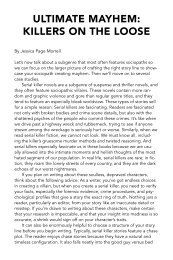 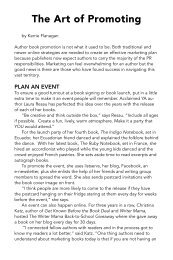 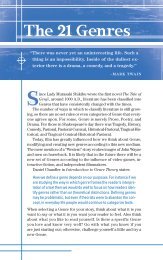 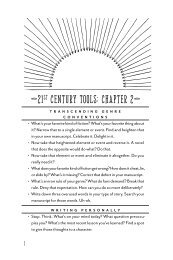 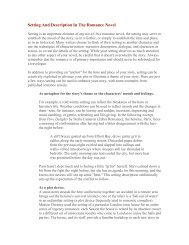 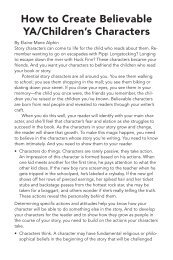 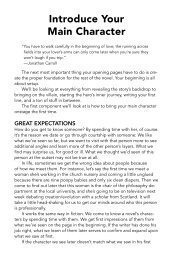 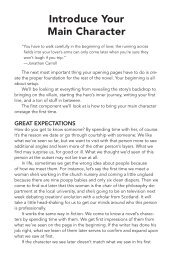 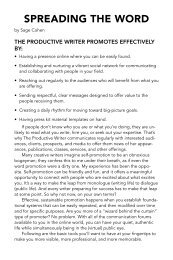 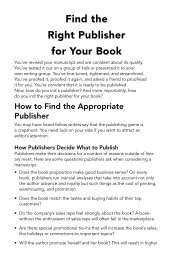 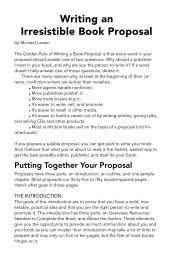 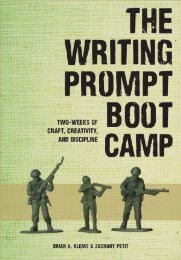 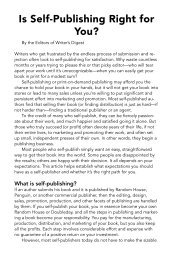 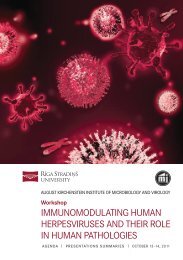 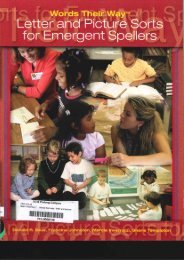 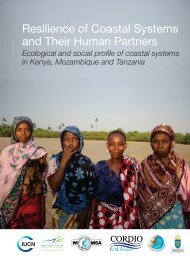