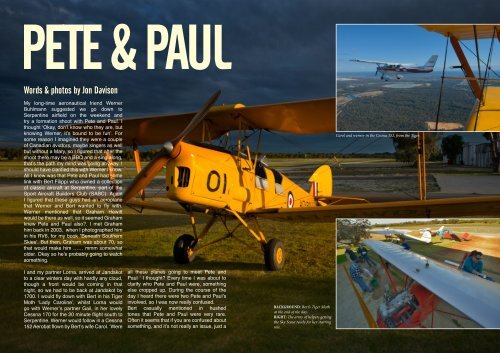 Words & photos by Jon Davison - Eye in the Sky Productions

Words & photos by Jon Davison - Eye in the Sky Productions

curiosity, there comes a point where it’s justtoo embarrassing to actually ask what it’s allabout, well that’s where I was on the flightdown. So I busied myself with my camerasettings, changed lenses and took a fewshots of Carol and Werner in the Cessna152. The flight was easy and it was very niceto be back in a Tiger again. As I knew wewould be doing air-to-air (A2A) work, andknowing from experience that it was nevereasy to shoot from the Tiger Moth - unlessyou was kneeling in the pilots seat facing aft!- I wondered what the cameraship would be.Graham brings his Air Camper in close to the camera forJon’s cameraSerpentine came into view and we came inafter the 152, and rolled up to Bert’s hangar,where we were greeted by Grahams wifeRobin sitting on a chair in the shade. At onceBert was into action, the hangar doors openedup to reveal his collection of exotic machines.A Sopwith Pup, a German and JapaneseBucker Jungmann, a French Nord 3202 anda little red single seat thing that looked like atoy. Overhead something was busily flyinglike a bee around the airfield, and looking upI could see that it was similar to Bert’s ‘littlered thing’ but a two seater, sporting a blueand red livery. It soon came into land, rolledup to the hangar and out stepped a sprightly83 year old Graham Hewitt!It transpired that Graham had just spent thelast seven years building this machine. To meit looked very similar to Bert’s red one, whichwas now out of the hangar and was busilybeing shampooed and cleaned by a smallarmy of people that had suddenly appeared.So it seemed that a lot more people knewabout todays activities. I casually looked atthe little engine of Bert’s one, a Ford Model A(38HP) engine! Wow, I thought, this must beold. Werner said it was built in 1932.A light bulb began to glow somewhere insideme. Mmm, better look for the name plate. Ahyes there on the side. What’s that ‘Pietenpol’?Oh gawd! ... penny drops.The pieces of the puzzle fell into place. Sothere was to be no sing along at the BBQwith Pete and Paul, minus a Mary. This littlered thing was one part of the equation, andGrahams blue and red one was the other. SoBert topping up the radiator on his Sky Scoutpete_paul_final.indd 4-59/07/13 11:47 AM

So this was the event, an A2A photo shoot ofthese two little homebuilts.To my thinking they were Pete and Paul, so Idecided to keep the names so I would knowwhich was which in the air.For those like me who had no idea what theseaircraft were, here is some background fromGoogle’s Wikipedia.So it appears that Bert’s Sky Scout is a veryrare bird indeed, as it is the actual originalNo2 aircraft built by Bernard Pietenpol allthose years ago, and it is still flying. How itever left the US is incredible and anotherstory in itself. But this now priceless pieceof aviation history is alive and well in oldWestern Australia.THE A2A SORTIEI tried crouching in the Tiger facing aft, just tosee if I could shoot from it, but with no way tostop me falling out, it was considered a no-go(I would . have, you know, just for the shot!).In the end we found that the door could beeasily removed from the C170. With mestraddling the right hand seat and facing aft,I had a perfect shooting position to get thosehard-to-get three quarter head-on shots. Theidea was that we would meet upstairs withBert and Graham and formate on Bert first,then Graham on his own, all the whilekeeping radio communication. That wasthe plan anyway. Once upstairs of course,the things that you have not allowed for,even though you have thought about it,do happen. Grahams radio cut out, sothat was it, the plan fell to pieces. With nocommunication, Graham pulled away anddecided to land.Bert came alongside and Werner got usvery close with some amazing side-slipsThe Pietenpol Sky Scout (Bert’s single seater) is aparasol wing homebuilt aircraft designed by Bernard H.Pietenpol in 1933.The Sky Scout was a lower cost follow-on to thePietenpol’s first homebuilt design, the Pietenpol AirCamper (Graham’s two seater). Using a lower costengine, rather than the more current Ford Model Aengine of the time.The aircraft was redesigned for the heavier, lower powerengine by reducing it to a single person aircraft. Thenew pilot location required a section called a “flop” tobe installed, essentially a section of the wing that washinged up to allow the pilot to stand up when gettinginto and out of the aircraft. The aircraft was designed tobe built of spruce and plywood.One of Pietenpol’s goals was to create a plane that wasaffordable and easy to construct for Home builders.Building an Air Camper requires basic woodworkingskills and tools. Builders also need to fabricate somemetal fittings to attach the wooden parts together. Somewelding is required.The plans for the Pietenpol Aircamper were originallypublished in a four-part serial in the “Flying and Glider”Manual of 1932-33.My point-of-view from the open door of the Cessna,as Graham pulls up behind uspete_paul_final.indd 8-99/07/13 11:47 AM

Bert up close!that I never knew a Cessna could do. Thetwo aircraft did the normal aereial ballet inthe slightly turbulent air, with each trying toget into the agreed 4 O’Clock postion. Theopen door of the Cessna gave a magicalview of the world outside, and both Wernerand I could pretty much keep an eye onwhere Peter and Paul were at any one time.This was the first aerial shoot with my newNikon D800 camera, with its whopping 36Megapixels, so I was eager to see whatdetail it could record. I have used the NikonD3 for a few years now and found it to be agreat camera, but this new one, whew, youcould zoom right in and see every detail onBerts smiling face!After a good 30 minutes in the air it wastime to land, regroup and have a cup of tea,cake and sandwiches, graciously preparedby Robin, Carol and Lorna. The predictedfront looked like it was approaching as thesky was darkening. So we decided to doone more sortie, this time with a repairedradio, plus a ‘dirt dive’ on the ground towork out how we were going to formatein the air. We stood behind the Cessna inits 4 O’clock position at the right distance,and decided that this would be the plan. Itworked perfectly, with Bert locking on to our4 O’clock and pointing his nose directly atus. Graham did the same and the resultsare exactly what we all wanted. The savinggrace with the overcast sky was that when Ihad the earth as the background rather thanthe sky, there was only minimal shadows,so very little contrast. This always looksgreat with a telephoto lens and helped todelineate the aircraft very well.pete_paul_final.indd 10-119/07/13 11:47 AM

Lorna and Bert at sunset with the cranes ofFremantle Port in the background.With the front gaining in intensity and thesky darkening, we decided to head forhome. Lorna had never flown in a smallaircraft, let alone a biplane. So it was a raretreat for her to fly back with Bert in his Tigerand experience something that we who areinvolved the aviation world are so familiarwith. As we approached Perth, the sunjust managed to find a clear space just onthe horizon over Fremantle. The all roundview from the 170’s front screen was prettyamazing and I could appreciate why Gailloved her machine.Looking out from the 170 over to theTiger, the spectacle was just perfect.The golden sun illuminating the clouds,whilst silhouetting this classic aircraft andreflecting on the River and ocean, reallymade me appreciate just what a privelegethis aerial perspective really is. To me it wasa perfect end to a perfect photo shoot.Having fun on the weekend with classicaeroplanes, making new friends, gettingintroduced to Peter and Paul! and workingwith some very passionate and talentedaviators. Nothing much beats that.Jon DavisonGrateful thanks to Werner, Bert, Graham,Gail, Carol, Robin, Steve and Lorna.www.eyeinthesky.com.aujon@eyeinthesky.com.aupete_paul_final.indd 12-139/07/13 11:47 AM