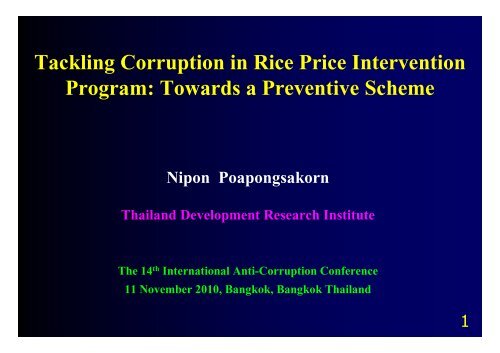 Tackling Corruption in Rice Price Intervention Program: Towards a ...

Tackling Corruption in Rice Price Intervention Program: Towards a ...

Topics of discussion• Changes in the agricultural price interventionpolicy in Thailand• The paddy pledging program: changes in itsobjectives, impacts and problems• The new income guarantee program• How to fix the remaining problems• Conclusion: political uncertainty2

1.Changes in the Thai agricultural price interventionpolicy in the late 1980s• Like other countries, the Thai agricultural priceintervention policy has changed from a regime thatpenalized the farmers to one that provides increasing farmsubsidy in the late 1980s, except the sugar cane industry– Before 1986, the agricultural sector was heavily taxed by variousmeasures, particularly the export taxes and export quotas, etc.– The policy resulted in large net resources transfer from theagricultural sector to finance the industrialization and to lowerthe cost of living of non-agricultural consumers– The depression of world rice price in the mid 1980 forced thegovernment to eliminate the export taxes– Since then, the government has begun to increase farm subsidyin response to the farmer protests 3

2.The paddy pledging program: changing objectives• The paddy pledging program was, first introduced in the 1980sbut became the major paddy intervention program in 1991• Its original objective was to provide short-term liquidity forthe farmers to delay selling their paddy during the harvestingperiod– The farmers were able to obtain the subsidized loan at 90% ofthe value of their crops which were used as the collateral– Before 2002, less than 6% of paddy production were underthe pledging program, except in 1992/93– The farmers were given 2 options: (a) to redeem their pledged paddyand repay their loan if the market price was higher than the pledgingprice, (b) to forfeit the collateral if the market price was lower thanthe pledging price 4

• In 2001/02, the Thaksin government, which won a landslideelection based on the populist policy platform, increasedthe pledging price to 100% of the market price– Then in 2004/05 and 2005/06, the pledging price was increased to30% of the market price– As a result, the volume of pledged paddy jumped to 37% of paddyproduction in 2004/05– The program was, in fact, changed to the “price supportprogram”, yet its misleading name was retained• One of the hidden objective to increase the pledging priceof paddy in 2004/05 was to help a new rice exporter whosuccessfully bid 1.67 million tons of government rice at theprices higher than the fob prices, according to the evidencepresented in an Economic Commission of the Senate in20055

3.Impact and problems of the paddy pledging• Cost and revenue of the programprogram in 2005/06Loss6

• Economic rent and loss of the program:• Contrary to the stated object of supporting the rice price for the farmers, most ofthe program benefits (45%) went to exporters and rice traders. Farmers’ benefitwas only 37% .7

4.The new policy of farmer income guarantee has beenintroduced by the Apisith government in 2009• The objectives– Government will neither intervene in ricetrading, nor in rice milling nor in rice storage,thus avoiding the rent-seeking activities of themillers and exporters as well as allowing the ricemarkets to work efficiently– Most, if not all, subsidies should go to “every”farm household and none to the rice traders11

• How does it work?– Each farm household can insure up to 20 tons. 94% of farm householdshave production less than 20 tons– The guarantee price was 10,000 baht per ton of paddy– If the price reference (calculated from the average market prices) duringthe harvesting period is lower than the guarantee price, the farmer willreceive the difference as a compensation from the Bank for Agricultureand Agricultural Cooperatives (BAAC)– The government no longer involves in the rice trade and rice milling.Farmers sell their paddy in the markets and receive the market price plusa difference between the guarantee price and the reference prices (orabout 10,000 baht per ton)– In fact, the scheme is a quasi put option, or the price risk insurancescheme, in which the government charges no insurance premium12

• How does it work? (cont)– The Department of Extension is responsible for landregistration– The BAAC is responsible for the insurance contract– In 2009, the program covered 3 crops, i.e., paddy, cassavaand corn– Unlike the pledging program, all farmers, including thosewith no marketable surplus, are eligible to enroll in theprogram. Thus it benefits all 3.7 million farm households,as opposed to only 0.6 million farmers under the pledgingscheme.13

5.The remaining problems: towards an effectivecorruption preventive measures• It is very costly and time consuming to registerand prepare insurance contracts with 4 millionfarmers– So there is a need for the IT data base management• Reference price calculation– The sampling markets must be reliable15

• Some farmers failed to obtain the full value of guaranteeprice because they did not claim their compensation in aweek following their paddy sale– Informing the farmers of the correct information , the intent of theprogram and the consequence of not claiming the compensationin the following week• But the biggest problem is that some farmers brought nonriceland into the program as evidenced in the registrationof the farmers in the dry-season paddy production in theearly 2010– A need for the satellite images and a random inspection of farmland– Those who provide false information have to be revoked of the16entitlements to government subsidies

• Non-transparent sale of stock of government rice of 2-5 million tonsto one single company– The Minister of Commerce must produce and release a report on thesale procedures and the detailed financial statements• Two major challenges– In the future, farmers may put pressure on the government to increasethe guarantee price and the maximum amount of insured crops• The government has to introduce an insurance scheme– Some rice millers and exporters have been lobbying hard against theincome guarantee program• The public should be fully informed about the lobbying activities• The Civil Society organizations and the media should cooperate to report suchactivities and to campaign against the bad policies17 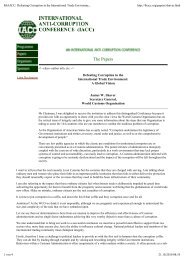 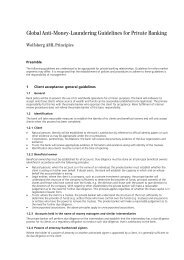 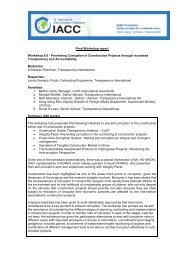 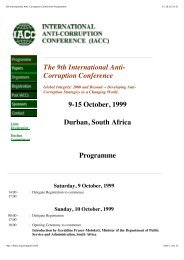 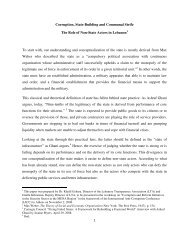 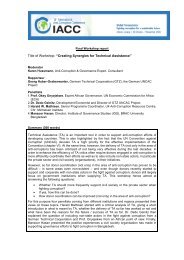 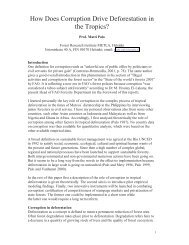 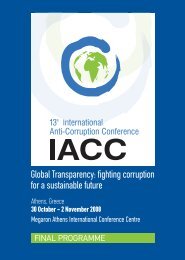 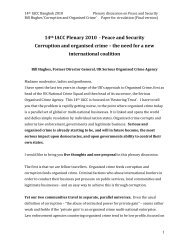 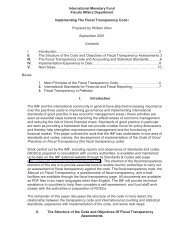 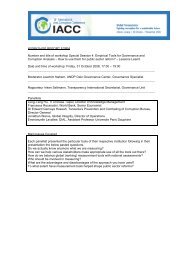 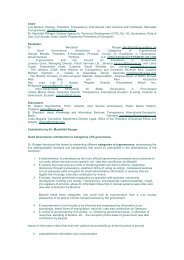 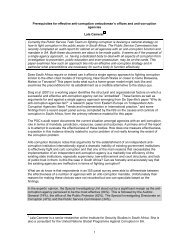 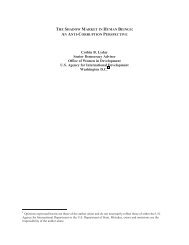 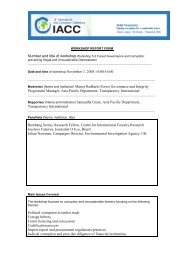 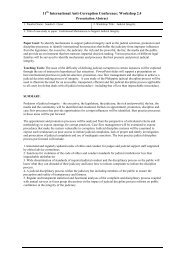 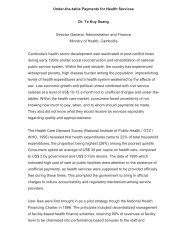 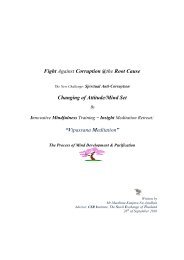 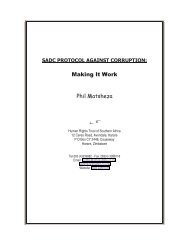 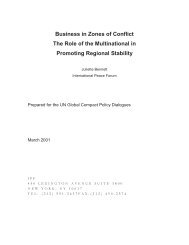 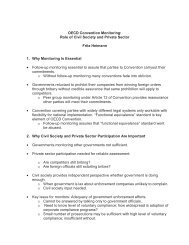 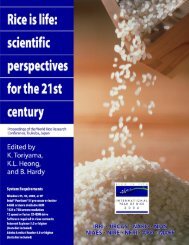 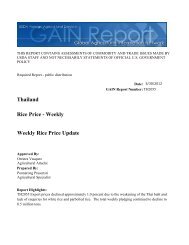 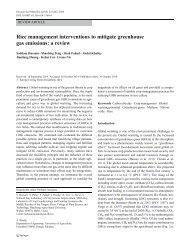 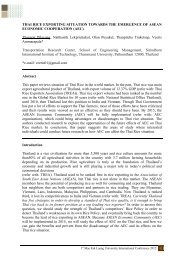 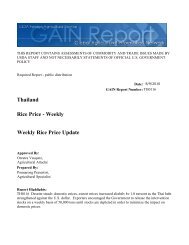 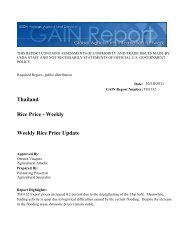 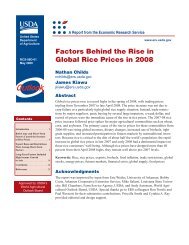 Magazine: Tackling Corruption in Rice Price Intervention Program: Towards a ...