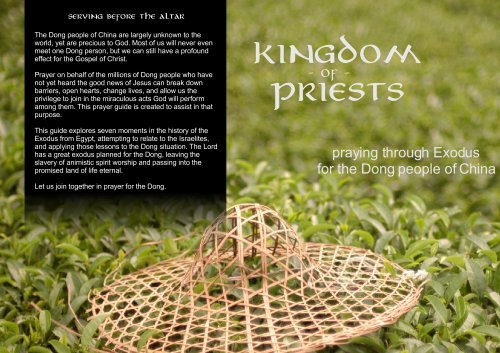 serving before the altarThe Dong people of China are largely unknown to theworld, yet are precious to God. Most of us will never evenmeet one Dong person, but we can still have a profoundeffect for the Gospel of Christ.Prayer on behalf of the millions of Dong people who havenot yet heard the good news of Jesus can break downbarriers, open hearts, change lives, and allow us theprivilege to join in the miraculous acts God will performamong them. This prayer guide is created to assist in thatpurpose.This guide explores seven moments in the history of theExodus from Egypt, attempting to relate to the Israelites,and applying those lessons to the Dong situation. The Lordhas a great exodus planned for the Dong, leaving theslavery of animistic spirit worship and passing into thepromised land of life eternal.Let us join together in prayer for the Dong.kingdom- of -priestspraying through Exodusfor the Dong people of China

so they may worshipThe journey of the Israelites out of Egypt, theExodus, was the primary salvation event in history untilthe coming of Christ. It is also one of the most tellingpictures we have of the salvation to come.We will spend a few days working through theevents of the Exodus and apply them in prayer to theDong people. To start off, let us pray through the maintheme of God's message to Pharaoh: "Israel is myfirstborn son. I commanded you to let him go, so he couldworship me" (4:22-23). Then, in more than half of thewarnings Moses gave to Pharaoh preceding the plagues,this theme is reiterated: "Let my people go, so they canworship me."Right now, the Dong people are held captive. Theyare oppressed by the spirits they worship and by thebelief system handed down from their ancestors. Theyare, spiritually, not free to worship the Lord. Let us withone voice, proclaim the same warning in prayer on behalfof the Dong.Father,We hear your words. You want the Dong peopleto worship you. We join together in prayer to proclaimyour word in the name of Christ: let the Dong go, sothey may worship you, Lord! Use our lips as your readymessenger and may it be done to your glory.

do we protest?Moses had to learn an early lesson in the Exodusprocess. God had already warned Moses of Pharaoh'sresponse before Moses ever took a step in the door. Evenso, after Moses's first request to Pharaoh, Pharaoh onlyincreased the work quotas for the enslaved Israelites, inExodus 5.Then the Israelite foremen caught up with Moses totell him to keep his mouth shut: "You have given them anexcuse to kill us!" (5:21). Losing heart, Mosesimmediately "protested" to the Lord, "You have not evenbegun to rescue them!" (5:23).We know ahead of time that the Lord intends toreach the Dong people. When something bad happens, ormore accurately, when nothing seems to happen at all, weprotest that God has not even begun to rescue the Dong.Indeed, this is a matter of life and death for thosestill not rescued. Just as the Israelites said, "You havegiven them an excuse to kill us!", so all those livingoutside of Christ will receive punishment.God's reply to all these things? "I will redeem youwith mighty power and greats acts of judgment."Father,We will continue in prayer for the Dong people.We will not lose heart when we face trouble or see noprogress, rather, we move forward with theforeknowledge that your plan will cause trouble withthose spiritual forces who hold the Dong captive. Yet, inthe end, you will succeed. We look forward and prayfor the "mighty power and great acts of judgment"among the Dong.

why signs and wonders?It would have been a lot easier on everybody if Godhad allowed the Israelites to just leave Egypt in the firstplace. God hardened Pharaoh's heart. Why? God says inthe first few verses of chapter seven that he did this so thathe could multiply his miraculous signs and wonders.What is the point? He causes more problems just sohe can solve more problems? We are so accustomed toreading that phrase, we do not realize how strange it reallyis.In verse 7:5, he states clearly his reason: so that theEgyptians "will realize that I am the Lord." The wholepoint is that God will receive glory. If he only wanted theIsraelites out, he could have softened Pharaoh's heart fromMoses and Aaron's first petition to Pharaoh.God wants glory. God rightly deserves glory. In thework among the Dong people, God wants glory as well.Who will declare the glory of the Lord? Who is going tosing his praises for the things he does among them? If wedo not, the very rocks will do so for us.So, let us save those poor rocks their breath and doour part in honor of the One who is saving them.Father of all, God,We come to praise you for who you are: thefather of the Dong people. You have planned theirsalvation from the beginning of the world and havealready begun your work. Though we do not know howyou will do it, we praise you for what you have done,what you are now doing, and what you are going to do.

he knows themWhy did God not choose the easy road? Why did henot just put the Israelites on the road to the promised land?Why did they have to head out into the desert?"If the people are faced with a battle, they mightchange their minds and return to Egypt" (13:17). As itturns out, God knew them better than they knewthemselves. We often see the people complaining in thedesert, but they did not turn back; God knew they wouldreally turn around if they had to make battle, which iswhat road travel would have meant.Thus, he sent the pillar of cloud and fire. It not onlyprovided direction for where to move, but when theEgyptians changed their minds and came out to kill theIsraelites, the cloud was also the Lord's defense for them.God also knows the Dong people. He knows thembetter than any missionary, better than any people groupprofile or strategy to reach them, in fact, better than theyknow themselves. God knows what they will need toaccept him and what they need to grow in him. Let us turnto him and ask him to continue preparing exactly what theDong people will need to believe him.Father,You understand the Dong people, know theirneeds, and know how to provide for them. We ask youto draw them out of their current slavery and helpthem find freedom in Christ. We know you havealready planned to provide what they will need to turnto you and believe in you, and we come to praise youfor your knowledge, understanding, and love.

kingdom of priestsGod has been proving who Yahweh is throughoutthe plagues and Exodus. He is a different kind of God, anda different kind of God develops a different kind ofrelationship with his people.In preparation for the giving of the commandments,God says, "you will be to me a kingdom of priests, myholy nation" (19:6). Most nations had a few priests whocommunicated with the gods for the rest of the society.Yahweh is different: the whole kingdom is made up ofpriests.In other words, he wants direct contact witheverybody, instead of talking through a few select people.Israel either forgot or ignored that concept, but that is howGod set up the new kingdom under Jesus, and is exactlythe relationship he wants with the Dong people.He does not want them to fear the unknown spiritualpowers or seek the help of witch doctors. He wants themto know him and commune personally with him. He hasgiven the life of his only son to establish that relationship.Just as the climax of the Exodus was the giving ofthe covenant, so also is joining the kingdom of priests theclimax of the new covenant.King of All,We see that you desire everyone to gain access tothe King himself. You alone know the path to bring theDong into the kingdom, and we pray that you will useour prayers to bring the Dong to a saving climax.

kingdom-of-priestspraying through Exodusfor the Dong people of China© DongTeam.orgPlease copy and distribute! Contrary to typical copyrightnotices, DongTeam.org allows reproduction ortransmission of this booklet in any form or by anymeans, electronic or mechanical, including photocopyingor recording to any information storage and retrievalsystem without written permission from DongTeam.org.In other words, share this booklet in any way you want,but if you do, we would love to know how you have usedit and if it was helpful.For always current information on the Dong people andcontinually updated prayer requests, visit theDongTeam.org website or subscribe to the Prayer Journale-mail updates on the website. This booklet and otherDong-related media are available for download if youwant the computer files or for purchase if you would likeprinted materials.Scripture quotations are taken from the Holy Bible, New LivingTranslation, copyright 1996. Used by permission of Tyndale HousePublishers, Inc., Wheaton, Illinois 60189. All rights reserved.Map on facing page is courtesy of the Perry-Constañeda Library MapCollection; red marking added by DongTeam.orgPhotos: all photographs in this booklet are taken by and used withpermission of ChinaCoop.net Photography. All rights reserved.Where are the Dong?The Dong people live in the mountains of SouthwestChina. They are located at the intersection of threeprovinces, Guizhou, Hunan, and Guangxi, with themajority of the population in Guizhou.Though the lush mountains provide beautiful scenery,those same mountains are the primary reason the Dongpeople remain one of the last Chinese minorities toreceive the Gospel. Distance from cities and difficulty intransportation have geographically isolated the Dongpeople from easy access to the message of Christ, untilthe last decade or so.However, China's rapid development has accidentallyhelped solve this geographical access problem. Highspeed highways, though rarely running directly to Dongareas, have decreased travel time to reach them, andinterconnected commerce has provided the motivationto build communication ties to the cities.They grow closer every day.

serving before the altarThe Dong people of China are largely unknown to theworld, yet are precious to God. Most of us will never evenmeet one Dong person, but we can still have a profoundeffect for the Gospel of Christ.Prayer on behalf of the millions of Dong people who havenot yet heard the good news of Jesus can break downbarriers, open hearts, change lives, and allow us theprivilege to join in the miraculous acts God will performamong them. This prayer guide is created to assist in thatpurpose.This guide explores seven moments in the history of theExodus from Egypt, attempting to relate to the Israelites,and applying those lessons to the Dong situation. The Lordhas a great exodus planned for the Dong, leaving theslavery of animistic spirit worship and passing into thepromised land of life eternal.Let us join together in prayer for the Dong.<strong>kingdom</strong>- of -<strong>priests</strong>praying through Exodusfor the Dong people of China 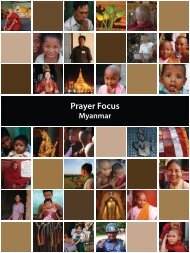 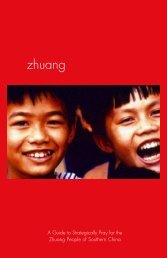 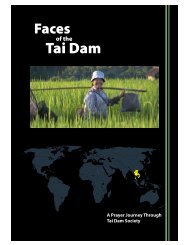 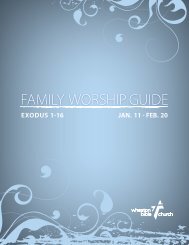 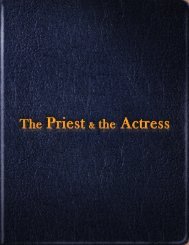 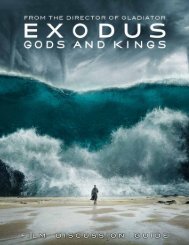 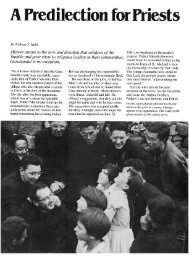 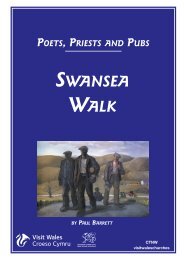 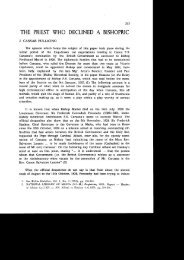 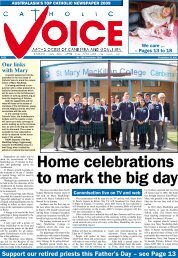 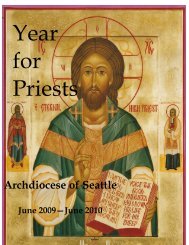 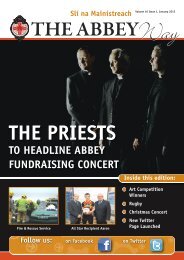 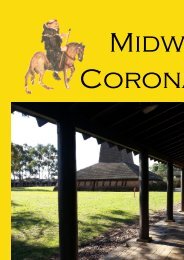 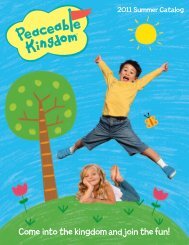 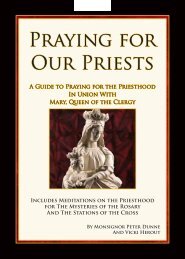 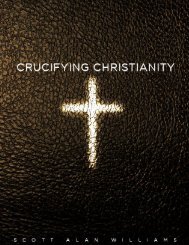 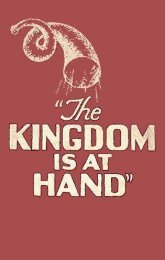 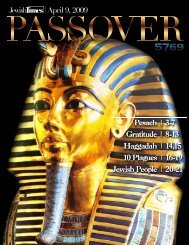