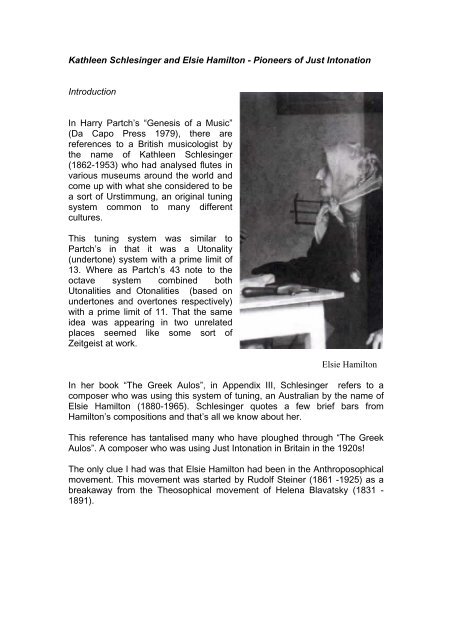 Kathleen Schlesinger and Elsie Hamilton - Pioneers of Just IntonationIntroductionIn Harry Partch’s “Genesis of a Music”(Da Capo Press 1979), there arereferences to a British musicologist bythe name of Kathleen Schlesinger(1862-1953) who had analysed flutes invarious museums around the world andcome up with what she considered to bea sort of Urstimmung, an original tuningsystem common to many differentcultures.This tuning system was similar toPartch’s in that it was a Utonality(undertone) system with a prime limit of13. Where as Partch’s 43 note to theoctave system combined bothUtonalities and Otonalities (based onundertones and overtones respectively)with a prime limit of 11. That the sameidea was appearing in two unrelatedplaces seemed like some sort ofZeitgeist at work.Elsie HamiltonIn her book “The Greek Aulos”, in Appendix III, Schlesinger refers to acomposer who was using this system of tuning, an Australian by the name ofElsie Hamilton (1880-1965). Schlesinger quotes a few brief bars fromHamilton’s compositions and that’s all we know about her.This reference has tantalised many who have ploughed through “The GreekAulos”. A composer who was using Just Intonation in Britain in the 1920s!The only clue I had was that Elsie Hamilton had been in the Anthroposophicalmovement. This movement was started by Rudolf Steiner (1861 -1925) as abreakaway from the Theosophical movement of Helena Blavatsky (1831 -1891).

Historical and Metaphysical contextBlavatsky is a controversial figure. Her philosophy took many elements fromthe Indian traditions, notably Vedanta (the philosophy of the Upanishads) andintegrated them into a wider system that saw all religious paths leadingultimately to the same end. She also took on board the historical perspectiveof Vedanta, namely the concept of ages. In Indian philosophy these areimmense timespans of man’s evolution representing only moments in a day ofthe creator god Brahma. Into this timescale Blavatsky, in her syncreticmanner, weaves other narratives including the legendary civilisations ofAtlantis and Lemuria and material she gleaned from channelled entities andpsychic investigation.Theosophy has been part of the world view of many internationally renownedartists such as the painters Kandinsky and Roerich, the composers Scriabinand Dane Rudhyar.Steiner broke with Theosophy when Blavatsky’s heir, Annie Besant declaredKrishnamurti to be the second coming of Christ (a claim which Krishnamurtilater repudiated).Steiner’s philosophy, known as Anthroposophy, although mystical, was morerooted in Christianity and the scientific theories of Goethe. What it kepthowever, among other things, was the Theosophical concept of time and theidea that we are living in the post-Atlantean age (the time since the legendarycontinent of Atlantis sank beneath the waves). Steiner further developed ideasof the relationship between these ages and the evolution of humanconsciousness.This is the philosophical background to the thinking of both Schlesinger andHamilton. From reading Schlesinger’s work, my impression is that her searchwas for this Urstimmung. This she thought she had found in themeasurements of flutes from various cultures. The analysis of thesemeasurements led her to construct her system of Harmoniai. This system shethen overlaid with philosophical and mystical concepts from Anthroposophysuch as the association of each mode with a particular planetary energy in theastrological sense.Inevitably her theories came under criticism from other academics. EvenDane Rudhyar, no mean mystic himself, asserts that Schlesinger “totallymisunderstood the early development of music.” (The Magic of Tone and theArt of Music. Dane Rudhyar. Shambhalla Publications. Boulder CO. 1982)According to American musicologist, John Chalmers “Although Schlesinger'stheories are considered incorrect by most scholars of classical Greek music,her scales form a fascinating musical system in their own right.”

For me, however, as a composer working with non-standard tuning systems, Ifind Schlesinger’s system the most satisfying and useful. There is an internalconsistency and mathematical rigour and elegance that I like. In addition, it iseasy to explain to musicians and non-musicians alike.In my own research I have expanded the idea of Modal Determinants (MDs)to higher numbers so that lower MDs become subsets of those higher. I havehowever stayed within the prime limit of 13 used by KS and EH because Icannot feel the quality of higher prime numbers such as 17 or 19. I don’t gettheir sense of identity.What counts in musicThis raises a major point and links us back to Steiner’s work on Goethe’sscientific theories. For Goethe and for Steiner, western science has made themistake of concentrating solely on quantitative aspects (that which can bemeasured) and ignoring quality.Albert Einstein had a sign hanging in his office at Princeton that read: “Noteverything that counts can be counted, and not everything that can becounted counts.”But number is more than just a system of counting things. To a Jungiananalyst, numbers are archetypes with symbolic associations. To thesynaesthete, numbers are identities with their own individual qualities: tastes,textures, smells and personalities. But synaesthesia is in fact a continuum;something we all partake of to a greater or less extent. The ability to perceivethe emotive, textural, sensory etc quality of number is not restricted to an oddfew.Through working with tunings, many people have come to this sense ofvibrations as identities. Partch talks of odentities and udentities. AlainDaniélou (Music and the Power of Sound: The Influence of Tuning andInterval on Consciousness. Inner Traditions International 1965) talks of themetaphysical qualities and effect on consciousness of different primenumbers.This right-brained way of appreciating number is fundamental to the way ofworking with tunings and is the complete antithesis of Schoenberg’s twelvetone system. As Lou Harrison puts it in in his Music Primer of 1970, “Thus, he[Schoenberg] substituted an order of succession for a hierarchy ofrelationships.”It is the Cartesian paradigm of the split between the observer and theobserved (based on the thinking of Aristotle) that has taken us out ofrelationship to nature. Nature has become a thing out there, an “it”, somethingwe are not a part of. This dualistic thinking has led to our delusion of

dominance over nature and is at the basis of the ecological crisis we findourselves in. It is no coincidence that Descartes and the so-called “Age ofEnlightenment” was contemporary with the introduction of EqualTemperament where the harmonic relationship between notes is severed.(Twelve tone equal temperament which predominates in the west, is based onan irrational number, the twelfth root of two - the number which has to bemultiplied by itself 12 times to make 2 - or approximately 1.0594630943593.)In the non-dualistic paradigm, the observer is not separate from what isobserved. This paradigm is fundamental to subatomic physics sinceHeisenberg and Schrödinger. At the human scale, it means looking at natureas a “you” rather than an “it”, the word “you” implying relationship.In Just Intonation, the notes relate to each other in simple whole-numberratios. Relationship is built in to the fabric of the tuning. It only has to berevealed in the course of a piece of music. And as there is harmonicrelationship between the notes, there is an intrinsic relationship between themusic and the audience.* * *Reading the written works of Schlesinger and Hamilton elsewhere on this site:The Nature of Musical Experience in the Light of Anthroposophy by ElsieHamiltonThe Modes of Ancient Greece by Elsie HamiltonThe Language of Music by Kathleen SchlesingerThe Return of the Planetary Modes by Kathleen Schlesingerwill give deeper insights in to the world view of these two pioneers ofalternative tuning.Schlesinger’s magnum opus “The Greek Aulos” (Methuen. London. 1939)is out of print but a copy is available on inter-library loan from the BritishLibrary in Boston Spa to readers in the UK.On this site as well are reproductions of scores in pdf format some kindlyphotocopied by John Wood of Stroud others made available by the library inDornach, Switzerland.* * *Of Elsie Hamilton we know very little. She was born in 1880 in Adelaide,South Australia where she knew Hooper Brewster-Jones, a pioneeringAustralian modernist. Came to Britain in 1906. Was a concert pianist andcomposer in equal temperament (her only extant composition in EqualTemperament is Feuilles D’Automne for piano) before meeting Schlesingerand deciding to devote her life to composing using Schlesinger’s Harmoniai.Her key written work is “The Modes of Ancient Greece”, a booklet where shedescribes 7 scales relating to the seven planets known to the ancients.

She travelled around Europe (Germany, the Netherlands, Finland)demonstrating and talking about the tuning system and her compositons.Later she took on a position as music teacher at a Steiner school in Stroud,Gloucestershire, UK. After which she returned to Australia.Elsie Hamilton (right) conducting an ensemble of lyres, cello and fluteSome of the scores presented here were donated by John and Daisy Woodwho taught with Hamilton at the school. Also the copy of her summary ofSchlesinger’s tuning system “The Modes of Ancient Greece” which is e-published here for the first time in pdf format. The articles: The Nature ofMusical Experience in the Light of Anthroposophy by Elsie Hamilton, TheLanguage of Music by Kathleen Schlesinger, and The Return of the PlanetaryModes by Kathleen Schlesinger were found in the Library of Steiner House,Park Street, London, UK.It is believed that Elsie Hamilton returned to Australia after retiring fromteaching and died in 1965. Despite attempts to contact Anthroposophicalinstitutions in Australia, we have no further knowledge of her or her heirs. Thetexts and scores available here are presented free of charge as the copyrightof them is unknown. They are presented with an intent with which I believeElsie Hamilton would have concurred: to harmonise humanity with the cosmosthrough music. May her work continue.Brian Lee, London UK, 2006http://www.nakedlight.co.ukinfo@nakedlight.co.uk 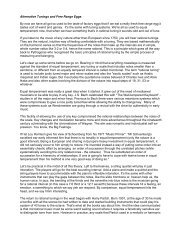 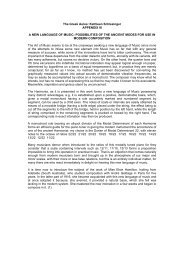 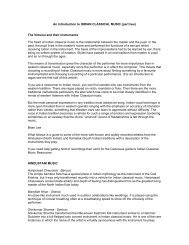 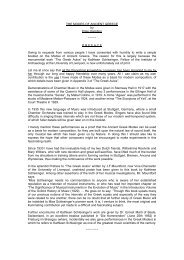 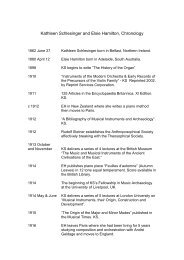