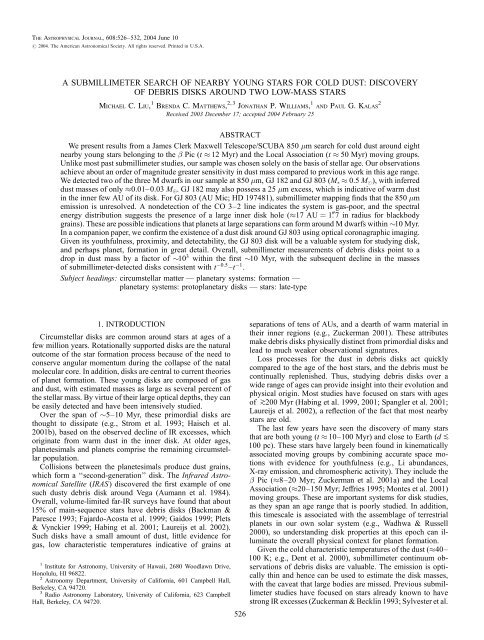 a submillimeter search of nearby young stars for cold ... - Astronomy

530 LIU ET AL.Vol. 608Fig. 2.—Debris disks with dust masses derived from submillimeter data. Detections are shown in boxes, where the letters indicate the spectral type. GJ 182 andGJ 803 are the M dwarfs detected in this paper. Nondetections are shown as smaller letters without boxes, assuming a dust temperature of 30 K. The GJ 799nondetection is obscured behind the M dwarf detection of GJ 803 at 12 Myr. In addition to this paper, data come from compilations by Wyatt et al. (2003) and Sheretet al. (2004) along with the young G star debris disk from Williams et al. (2004). The quoted age uncertainties range from 25% to a factor of 2.M dwarfs. Primordial disks are common around low-massstars (Haisch et al. 2001a) and even brown dwarfs (Liu et al.2003) at ages of a few Myr, and these systems may very wellgenerate debris disks as they age. The Spitzer Space Telescopewill offer the requisite sensitivity for detecting and studyingsuch disks.For GJ 182, the 25 m excess suggests that dust residesin the inner regions of its disk: 150–200 K blackbody grainswould lie at 1–2 AU from the star. Given the sparse samplingof the current SED, one cannot determine if the dust distributionis continuous throughout the disk or if there is a gap inthe middle regions of the disk (e.g., from planet formation)between the 25 m– and 850 m–emitting dust. However,as shown by Song et al. (2002), single-band excesses near thesensitivity limit of the IRAS catalog may not be reliable. Althoughthe SCANPI detection of GJ 182 has S=N ¼ 4:6, higherthan the S=N ¼ 2 4 objects examined by Song et al., for nowwe treat the 25 m excess of GJ 182 as tentative. More detailedSED measurements, in particular with Spitzer, would be invaluableto characterize this star’s disk.The absence of warm dust in the inner regions of GJ 803(and perhaps GJ 182, if the 25 m detection is spurious) isnaturally explained by an unseen inner companion. The 40 Ktemperature characteristic of the SED is too cold to be explainedby sublimation or melting of icy grains (100–170 K).Without an inner companion, the effect of Poynting-Robertsondrag would cause grains to spiral inward and produce significantmid-IR emission. Such inner holes are typical for debrisdisk systems. Indeed, the few debris disks with resolved dustemission show morphologies highly suggestive of the dynamicalinfluence of an unseen companion at mean-motionresonances (Holland et al. 1998; Greaves et al. 1998; Ozernoyet al. 2000; Koerner et al. 2001; Wilner et al. 2002; Quillen &Thorndike 2002; Wahhaj et al. 2003; Kuchner & Holman 2003;Thommes & Lissauer 2003).The 40 K characteristic temperature from the SED fittingmeans that blackbody grains around GJ 803 would be at adistance of 17 AU, or an impressively large angular separationof 1B7. (For GJ 182, 17 AU corresponds to only 0B6.) Thisprovides only a rough guide as to the angular separation ofany interior companion, since it is difficult to use the SEDs ofdebris disks to predict the spatial dust distribution (Sheret et al.2004). Shallow IR adaptive optics imaging from the KeckObservatory with 0B05 resolution shows no stellar or massivebrown dwarf companion, suggesting that an even lower masscompanion is present. To date, GJ 876 is the only M dwarfknown to have extrasolar planets (Marcy et al. 1998, 2001);its two planets have semimajor axes of 0.13 and 0.21 AU.Thus, the GJ 803 inner disk hole may indicate that planetscan exist at larger separations around M dwarfs than known sofar and that such planets can form within 10 Myr. Furthermore,given the very young age of the system, a planetarycompanion is predicted to have significant thermal emission(e.g., Burrows et al. 1997) and hence might be detectable withdeeper adaptive optics imaging. M dwarfs are by far the mostnumerous type of star, so a better understanding of their planetbearingfrequency is needed for a complete census of the extrasolarplanet population.Follow-up coronagraphic imaging by Kalas et al. (2004)finds that GJ 803 has a large, nearly edge-on disk seen inscattered optical light. This disk is detected from 5 00 –21 00 (50–210 AU), although the inner and outer extent are not wellconstrained. Our submillimeter imaging finds that the 850 mdust emission is unresolved. This is entirely compatible with 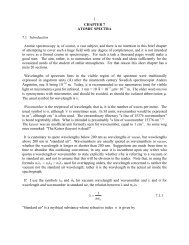 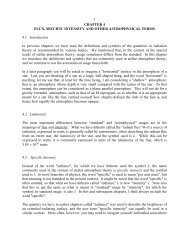 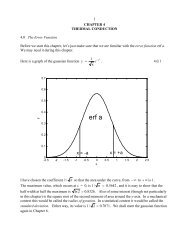 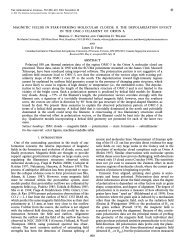 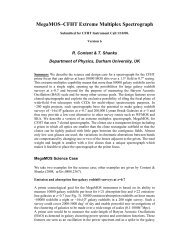 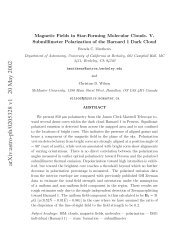 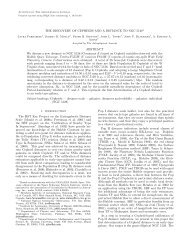 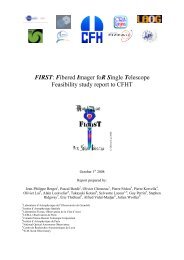 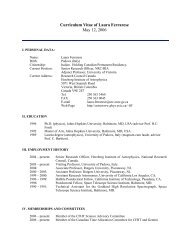 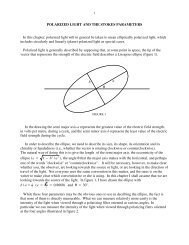 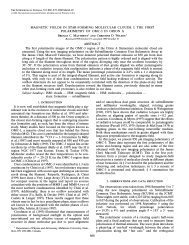 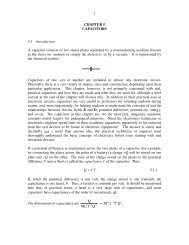 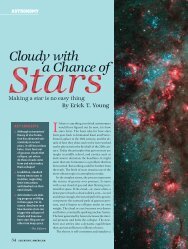 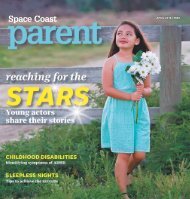