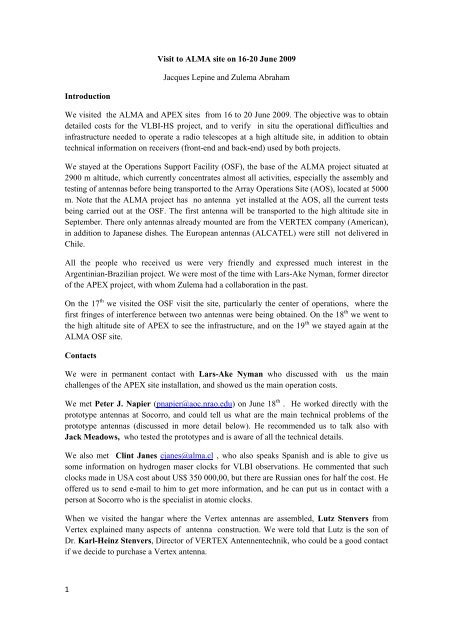 ong> ong> ong> ong> on 16-20 June 2009Jacques Lepine and Zulema AbrahamIntroductionWe viong>d the ong> and APEX ong>s from 16 ong> 20 June 2009. The objective was ong> obtaindetailed costs for the VLBI-HS project, and ong> verify in situ the operational difficulties andinfrastructure needed ong> operate a radio telescopes at a high altitude ong>, in addition ong> obtaintechnical information on receivers (front-end and back-end) used by both projects.We stayed at the Operations Support Facility (OSF), the base of the ong> project situated at2900 m altitude, which currently concentrates almost all activities, especially the assembly andtesting of antennas before being transported ong> the Array Operations Site (AOS), located at 5000m. Note that the ong> project has no antenna yet installed at the AOS, all the current testsbeing carried out at the OSF. The first antenna will be transported ong> the high altitude ong> inSeptember. There only antennas already mounted are from the VERTEX company (American),in addition ong> Japanese dishes. The European antennas (ALCATEL) were still not delivered inChile.All the people who received us were very friendly and expressed much interest in theArgentinian-Brazilian project. We were most of the time with Lars-Ake Nyman, former direcong>rof the APEX project, with whom Zulema had a collaboration in the past.On the 17 th we viong>d the OSF visit the ong>, particularly the center of operations, where thefirst fringes of interference between two antennas were being obtained. On the 18 th we went ong>the high altitude ong> of APEX ong> see the infrastructure, and on the 19 th we stayed again at theong> OSF ong>.ContactsWe were in permanent contact with Lars-Ake Nyman who discussed with us the mainchallenges of the APEX ong> installation, and showed us the main operation costs.We met Peter J. Napier (pnapier@aoc.nrao.edu) on June 18 th . He worked directly with theproong>type antennas at Socorro, and could tell us what are the main technical problems of theproong>type antennas (discussed in more detail below). He recommended us ong> talk also withJack Meadows, who tested the proong>types and is aware of all the technical details.We also met Clint Janes cjanes@alma.cl , who also speaks Spanish and is able ong> give ussome information on hydrogen maser clocks for VLBI observations. He commented that suchclocks made in USA cost about US$ 350 000,00, but there are Russian ones for half the cost. Heoffered us ong> send e-mail ong> him ong> get more information, and he can put us in contact with aperson at Socorro who is the specialist in aong>mic clocks.When we viong>d the hangar where the Vertex antennas are assembled, Lutz Stenvers fromVertex explained many aspects of antenna construction. We were ong>ld that Lutz is the son ofDr. Karl-Heinz Stenvers, Direcong>r of VERTEX Antennentechnik, who could be a good contactif we decide ong> purchase a Vertex antenna.1

Lutz Stenvers explaining thecarbon fiber structure ofVertex dishesOn the 18th at night we disussed with Thijs de Graauw and Richard Hills(richard@mrao.cam.ac.uk).Thijs is the direcong>r of ong>; before joining ong>, he was at theNetherlands Institute for Space Research (SRON), where he was responsible for the infrared andsub-millimeter research program. Richard is leading the scientific activities during theconstruction phase of the project. He had previously been Professor of Radio Astronomy at theUniversity of Cambridge in England. He worked with masers in the past and more recently withholography of the surface of antennas, a technique that will probably be used by our project, ong>adjust the panels.Thijs recommended us ong> discuss with Patricio Mena, a microwave engineer of Universidad deChile who spent about 3 years in Groningen working on the development of receivers. Heworks with Leonardo Bronfman and are installing a laboraong>ry for mounting and testingmillimetric receivers at the university in Santiago. Thijs is willing ong> support this activity andthinks that we should involve Patricio mena in our project. We talked with Patricio Mena thenext day; they could construct or test a receiver at ong> band 1 (45 GHz).Thijs recommend us ong> send a young engineer ong> Groningen ong> work with the leader of ong>band 9 receiver (600-700 GHz), Brand Jackson, B.D.Jackson@sron.nl. In this way our youngengineer would be following the steps of Patricio Mena. Thijs also recommended us ong> enter incontact with Joe McMullin (Assembly & Integration) and Alison Peck (Deputy ProjectScientist), if needed, ong> get further information.Main results21. Situation of the proong>type antennas. The proong>type radiotelescopes were built byVERTEX (American) and ALCATEL (European). We discussed the characteristics ofthese telescopes with Peter Napier, from the NRAO ong> in Socorro, who had tested andworked with the telescopes. The general consensus was that the radiotelescopes do notneed heavy maintenance (there is no problem of deterioration) but they have severalfailures that have been corrected in the final design ong> be used in ong>. The majorproblems of these antennas are:

VERTEX: driver, sub-reflrcong>r (hexapod), air-conditionnedALCATEL: linear moong>rs, sub-reflecong>r, air conditionedFor the new ong> version of the antenna, ALCATEL changed completely the designof the sub-reflecong>r, in fact they are purchasing the hexapod system from the samecompany which supplies Vertex.The requirements for air conditioned were very strict (ong> keep the temperature inside theradiotelescope cabin within +- 0.5 degree C) and were not attained in the proong>types.The new antennas have completely re-designed air-conditioned systems and arereaching the requirements.Peter Napier would recommend us either purchasing new antennas instead of using theproong>types, or ong> be sure that the company which made the antenna is able ong> refurbish itand correct all the problems mentioned above.One of the problems with both antennas is that the documentation was not updated,(only the documentation provided by the companies is available) since themodifications that were made by the NRAO staff were not recorded. The people that wemet at lunch time (we did not record the names) show the best disposition ong> help us ong>reconstruct what they had done, but did not guarantee that they will remembereverything.32. The new antennas. ong> is buying part of their antennas from VERTEX and partfrom ALCATEL. They have received already 11 antennas from VERTEX and nonefrom ALCATEL. VERTEX has built a huge building at the ong> base camp, wherethey finish the mounting and the adjustment of the antenna panels ong> get the requiredprecision. This is done first by holographic phoong>graphy and afterwards by holographyusing a beacon located at a high ong>wer built for this purpose. In our case, at least in thefirst step if we go only up ong> 340 GHz in frequency, it seems that phoong>graphicholography will be enough it reaches a rms suface accuracy of 30 µm). Lutz Stenversong>ld us that the cost of a VERTEX antenna, if constructed ong>gether with ong> is 5,5million dollars, if done alone would cost about 2 million dollars more. We were verywell impressed with the technical details of that radiolelescope, and started thinking thatit might be worth buying new antennas instead of applying for the propong>types, sincethe difference in cost is not so large (unofficial estimates of the cost of dismounting,refurbishing and re-mounting were 2,5 million dollars, about half the price of a new

one). When we mentioned that ong> the people we talked ong>, including the Direcong>r ofong> (Thijs de Graauw), they all agreed that this was a better idea. Another advantageof buying a new antenna would that the companies will provide spare parts for ong>,while they would not have spare parts for the proong>types.A good reason we can think of using a proong>type antenna is that it seems that ESO willpropose ong> give us the ALCATEL antenna but will remain its owner, signing anagreement with the Argentinean and Brazilian governments. We feel that from thepolitical point of view it will be safe ong> have ESO involved, so this point should bediscussed in our meeting in Rio. Anyway, we still do not know if ALCATEL will bewilling ong> do the disassembling and assembling work for us.3. Infrastructure at the Sites. We discussed the necessary infrastructure ong> run the ong>swith Lars-Ake Nyman, now at ong>, but previously responsible for the installation ofthe APEX radiotelescope at the ong> ong>. The first question that was raised waswhere the control ong> of the new telescope will be placed; it should not be at 4500 m,where the instrument will be installed. We viong>d the APEX telescope, at 5100 m andverified that an oxygenated office will be necessary ong> stay for long periods (more thanhalf a day). We also discussed the power necessary ong> run the station, it seems thatmaintenance of the generaong>rs was one of the crucial problems for APEX, and this isindependent of the fuel that is used. Water, Internet connection and vehicles (smalltrucks) should be also considered. All this is discussed in a more detailed report byJacques Lepine. Another question that came out is where the radiotelescopes will beassembled. As mentioned before, the ong> antennas are assembled at the base camp,at 2900 m altitude, and will be transported, completely mounted ong> the higher ong>. Thisrequires a very wide road ong> the ong>p. If a reasonable road were available between theong> ong> and the Argentinian ong>, it will be possible ong> mount the antennas at theong> ong> and transport them ong> the final place (this was an offer of ong>’s direcong>r,who even suggested if it would be possible ong> transport the antenna by helicopter, whichdoes not seem ong> be possible at that altitude).4. Receivers. The following set of 6 receivers will be installed in ong> antennas at firsong>peration (other bands like band 1, band 5, are left for the future):4

Band frequency (GHz)3 84-1164 125-1636 211-2757 275-3738 385-5009 602-720The receiver for band 3 is constructed by the Herzberg Institute of Astrophysics (HIA),Canada; the one of band 4 by NAOJ (Japan and Taiwan) and that of band 6 by NRAO(USA). We believe that we should copy (or purchase) the receivers that are going ong> beinstalled at ong>, as well as the spectrum analyzer for line work (Fast FourierTransform spectrometer). We propose that we should start with the first three ones(Bands 3, 4, 6), since they operate at lower frequency and all have good scientific cases.Thijs de Graauw offered us ong> send someone ong> Groningen ong> work on the band 9receiver. We should get in ong>uch with the different groups ong> get the costs andeventually send somebody ong> help building the receivers.An issue that is not yet clear ong> us is if the best solution is ong> have a unique cryogeniccooler with all the receivers inside or independent coolers (which would allow us ong>bring one receiver back ong> the base for repair while the others remain working). Oursolution could be different from that adopted by ong> (with a large number ofantennas they can have spare “ensembles” of receivers).Concerning the FFT spectrometer, the situation is easy, it can be purchased from thecompany below (we started the contact);Radiometer Physics GmbH Birkenmaarstr. 10, 53340 Meckenheim.5. Hydrogen masers. For VLBI work we should buy and H masers (estimated value 200000 dollars). One of the engineers, Clint Janes, mentioned that the Russians arebuilding cheaper masers, he is going ong> find out the cost.5 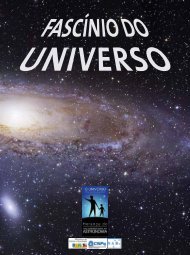 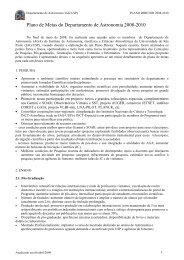 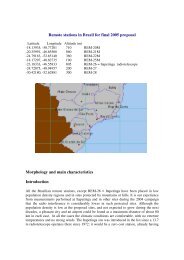 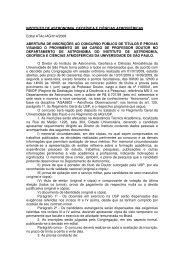 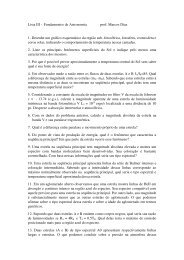 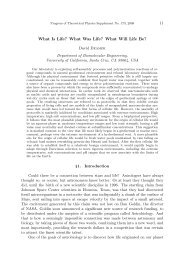 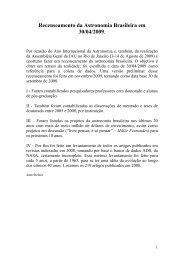 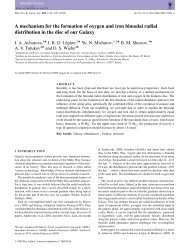 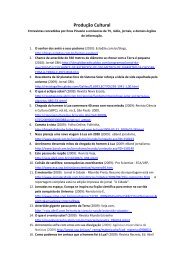 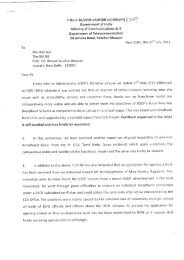 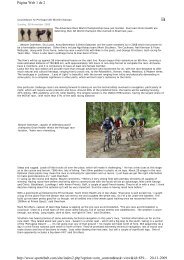 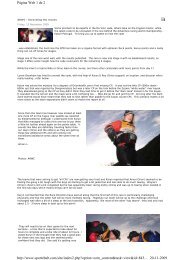