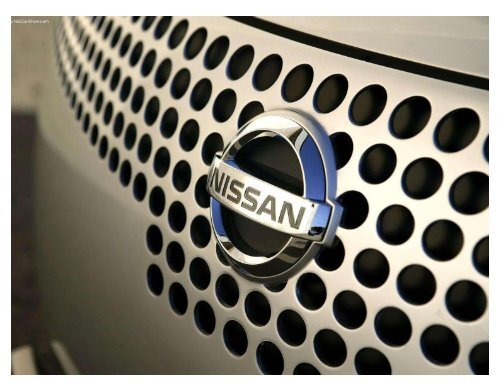 headquartered in Japan. It was formerly a core member of the Nissan Group, but has become more independent after its restructuring under Carlos Ghosn

(CEO).Nissan Motors is one of the Big Asian Four (with Toyota, Honda and Hyundai).

It formerly marketed vehicles under the "Datsun" brand name and is one of the largest car manufacturers. The company's main offices are located in the Ginza

Asian (also known as the Japanese Big 3 Automakers) rivals of the "Big Three" in the U.S. Currently it is the third largest Japanese car manufacturer. It also

manufactures the Infiniti luxury brand. The Nissan VQ engines, of V6 configuration, have featured among Ward's 10 Best Engines for 14 straight years, since the

award's inception. For the truck and bus maker "Nissan Diesel," it is a separate company from Nissan Motors; please see UD instead. The pronunciation of its

Beginnings of Datsun name from 1914

The new car's name was an acronym of the company's partners' family names:

passenger cars. The vast majority of its output was trucks, as there was almost no consumer market for cars at the time. Beginning in 1918, the first DAT trucks

In 1931, DAT came out with a new smaller car, the first "Datson", meaning "Son of DAT". Later in 1933 after Nissan took control of DAT Motors, the last

was moved to Yokohama.

In 1928, Yoshisuke Aikawa founded the holding company Nippon Sangyo (Japan Industries or Nippon Industries). "The name 'Nissan' originated during the

1930s as an abbreviation"used on the Tokyo stock market for Nippon Sangyo. This company was the famous Nissan "Zaibatsu" (combine) which included

Tobata Casting and Hitachi. At this time Nissan controlled foundries and auto parts businesses, but Aikawa did not enter automobile manufacturing until 1933.

Nissan would eventually grow to include 74 firms, and to be the fourth-largest combine in Japan during World War II. In 1931, Aikawa purchased controlling

this was the beginning of Nissan's automobile manufacturing.

In 1934, Aikawa "separated the expanded automobile parts division of Tobata Casting and incorporated it as a new subsidiary, which he named Nissan Motor

(Nissan)". Nissan Motor Co., Ltd. ( 日 産 自 動 車 Nissan Jidōsha). The shareholders of the new company however were not enthusiastic about the prospects of the

automobile in Japan, so Aikawa bought out all the Tobata Casting shareholders (using capital from Nippon Industries) in June, 1934. At this time Nissan Motors

effectively became owned by Nippon Sangyo and Hitachi. Nissan built trucks, airplanes, and engines for the Japanese military. The company's main plant was

DAT had inherited Kubota's chief designer who was an American, William R. Gorham. This, along with Aikawa's vision-inspiring 1908 visit to Detroit was to

greatly affect Nissan's future. Although it had always been Aikawa's intention to use the latest cutting-edge automaking technology from America, it was

Gorham that carried out this plan. All the machinery, vehicle designs and engine designs originally came out of the United States. Much of the tooling came from

the Graham factory and Nissan had a Graham license under which trucks were made. The machinery was imported into Japan by Mitsubishi on behalf of Nissan,

which went into the first Yokohama factory to produce cars.

From 1993-2002 Nissan partnered with Ford to market a consumer-friendly minivan: The Mercury Villager and the Nissan Quest. The two minivans were

manufactured with all the same parts and were virtually identical aside from several cosmetic differences. In 2002, Ford discontinued the Villager to make room

for the future Freestar and Monterey. Nissan brought out a new version of the Quest in 2004, which was designed in house and no longer related to any Ford

model. In 1992, Nissan re-launched its Terrano four-wheel drive, which was visually and mechanically identical to the Ford Maverick. Both cars were built in

Spain; although the Maverick was discontinued in 1998 due to disappointing sales, the Terrano was a strong seller and remained in production until 2005 when

the Nissan Pathfinder replaced it.

Like Hino and Isuzu, but unlike Toyota, Nissan partnered with an established European company to gain access to automobile and engine designs. Nissan chose

Austin of the United Kingdom, which later became the British Motor Corporation by its merger with Morris et al. Nissan began building Austin 7s in 1930,

though the legitimacy of their license at that time is debated.

Later, in 1952 Nissan Motor Company of Japan entered into a well-documented legal agreement with Austin, for Nissan to assemble 2,000 Austins from

imported partially assembled sets and sell them in Japan under the Austin trademark. The agreement called for Nissan to make all Austin parts locally within

Nissan used in developing its own engines for its Datsun line of cars. In 1953 British-built Austins were assembled and sold, but by 1955, the Austin A50 --

completely built by Nissan and featuring a slightly larger body with new 1489 cc engine -- was on the market in Japan. Nissan produced 20,855 Austins from

Engine Development: Nissan leveraged the Austin patents to further develop their own modern engine designs past what the Austin's A- and B-family designs

offered. The apex of the Austin-derived engines was the new design A series engine in 1967. Also in 1967 Nissan introduced its new highly advanced four

powered the new Datsun 510, which gained Nissan respect in the worldwide sedan market. Then, in 1970 Nissan introduced the Datsun 240Z sports car which

used a six-cylinder variation of the L series engine. The 240Z was an immediate sensation and lifted Nissan to world class status in the automobile market.

In 1966, Nissan merged with the Prince Motor Company, bringing into its range more upmarket cars, including the Skyline and Gloria. The Prince name was

eventually abandoned, with successive Skylines and Glorias bearing the Nissan name - however, "Prince" is still used in names of certain Nissan dealers in

Japan. Nissan introduced a new luxury brand for the US market in the early 1990s called Infiniti.

The Nissan Titan was introduced in 2004, as a full-size pickup truck produced for the North American market; the truck shares the stretched Nissan F-Alpha

platform with the Nissan Armada and Infiniti QX56 SUVs. The Titan features a 32 valve 5.6 L VK56DE V8 engine which generates 317 hp, and is capable of

towing approximately 9500 pounds. The Nissan Titan comes in four basic trim levels: XE, SE, and Pro-4X, and LE. The trim levels are combinations of the

features offered on the truck. It was listed by Edmunds.com as the best full-size truck. The Titan was nominated for the North American Truck of the Year award

Nissan has produced an extensive range of mainstream cars and trucks, initially for domestic consumption but exported around the world since the 1950s. There

for competition and performance development of such cars.Nismo's latest model is the 350Z LM. They recently launched mid-sized Nissan Navara truck, which

has 175 bhp (130 kW). Until 1982, Nissan automobiles in most export markets were sold under the Datsun brand. Since 1989, Nissan has sold its luxury models

in North America under the Infiniti brand.

Nissan also sells a small range of kei cars, mainly as a joint venture with other Japanese manufacturers like Suzuki or Mitsubishi. Nissan does not develop these

Nissan produces cars in association with the Dongfeng Motor Group including the 2006 Nissan Livina Geniss. This is the first in the range of a new worldwide

family of medium sized cars and is to make its world debut at the Guangzhou International Motor Show. Nissan launches Qashqai SUV in South Africa, along

Nissan will launch electric cars in Europe in 2010 with different business models in different countries. "It would be good date for both for Renault and Nissan"

to introduce mass-market electric cars, Carlos Ghosn told at the Tokyo Motor Show on Wednesday October 24, 2007. Renault-Nissan Motors alliance is in the

Advisory Council of the PHEV Research Center. Nissan Motor and Robert Bosch GmbH are in talks to form a comprehensive alliance in hybrid systems and

When Nissan launches its new line of electrical vehicles in America in 2010, it will initially target fleet buyers, which can provide their own charging stations. "It

will be a real business," says Tom Lane, Nissan's global product-planning chief, "not just a way to sell 200 cars in California." He expects sales to retail buyers to

begin in 2012, at a price of around $25,000. Nissan is also hedging its bets by developing both a "parallel hybrid" system (akin to that found in the Toyota Prius)

and a plug-in "series hybrid" similar to the Chevy Volt. But it favours the all-electric approach, even though it will be a tough sell, says Mr Lane. As for Mr

Ghosn, he has no doubts. "We must have zero-emission vehicles," he says. "Nothing else will prevent the world from exploding." Nissan Motor Company, Ltd.

aims to profit from the next generation of plug-in hybrid vehicles. In April, the company launched a joint venture with NEC Corporation and its subsidiary, NEC

(AESC), began full operations. The new company will invest $114.6 million over a three-year period in a manufacturing facility that will start producing 13,000

The batteries employ a compact laminated configuration with lithium-manganese electrodes, which NEC TOKIN will manufacture at a separate facility through

an additional investment of $105.1 million over the next three years. AESC intends to install the batteries in electric forklifts next year, and Nissan plans to use

the batteries in both a hybrid and an all-electric vehicle starting in 2010. Nissan claims that the batteries deliver twice as much power as the nickel-metal hydride

problems, according to the company.

In January 2008, Hiro Nakamura, Nissan's global design director stated that the Nissan Cube will be coming to the U.S. market as the Nissan Denki

L/100 km / 44.4 mpg–imp) and will be equipped with "e-4WD", which includes an electric motor operating (when demand dictates) alongside the gasoline

engine. The Nissan’s Denki Cube's U.S. release is scheduled to occur in early 2009.

Nissan plans a production hybrid electric vehicle to be introduced in 2010, not based on any current Nissan model. Nissan's original hybrid-electric delivered two

originally developed hybrid technology and its first rear-wheel-drive hybrid power-train. Nissan is developing a plug-in hybrid vehicle that could hit the market

after the debut of its electric cars in 2010.

Carlos Ghosn, said that the French-Japanese partnership will supply the state of Oregon with electric cars starting late in 2010 the latest in a series of agreements

aimed at encouraging demand for the ultra-clean vehicles. The Renault-Nissan alliance formed a similar deal with Tennessee earlier this year to establish the

conditions to encourage the use of electric cars in the central part of the state where Nissan has its U.S. headquarters. The alliance also has concluded accords

with Israel, Portugal, Denmark, Spain, France and a prefecture in Japan.