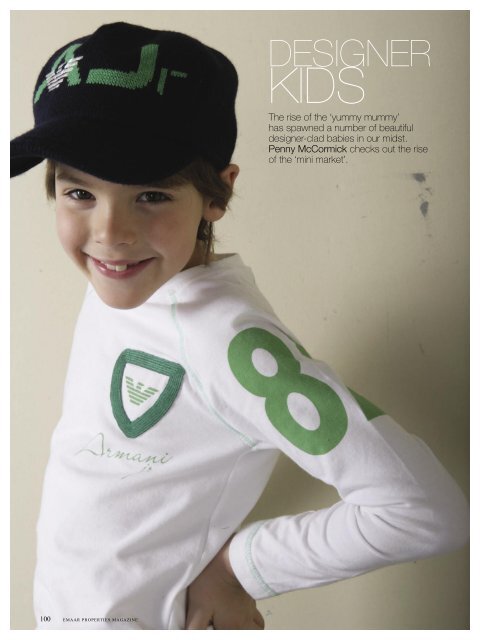 The rise of the ‘yummy mummy’

has spawned a number of beautiful

designer-clad babies in our midst.

Penny McCormick checks out the rise

of the ‘mini market’.

In the early 1980s, The Official Sloane Ranger Handbook by Peter

York and Ann Barr was a seminal tome, one into which many

dipped for fun or, alternatively, for advice. Turn to the chapter on

baby Sloanes, for example, and you would be confronted with a

list of clothing and accessory labels which, it was considered, were

de rigueur for all nurseries and any self-respecting baby to wear.

the baby’s layette, while Harrington squares (rather than nappies)

and Silver Cross pushchairs (‘baby faces you not the traffic’) and

Marmet prams were the items more often than not handed down

rather than acquired on the birth of an offspring.

How times have changed! Yes, Mothercare and Marks & Spencer

are the stalwart suppliers of basics and Babygros for many an infant,

have realised that the infant market is where it’s at. And we’re not just

talking clothes; perhaps it started with strollers or prams.

wheels – but somewhere in the Noughties strollers suddenly sprouted

accoutrements such as coffee cup-holders, straps and handlebars: the

Bugaboo was born. For people who are not parents (like myself ), a

Bugaboo resembles something astronauts took into space for the first

moon landing, but in bright colours. If that doesn’t tickle your fancy

try the Maclaren stroller by Starck or the mini Mies chair, which comes

If you’ve spent that much on a chair, chances are the next logical

step is to transform the nursery. Gone are the frills and friezes

and in are the minimal lines often associated with adults. It’s not

a question of dumbing down for children anymore, but actually

keeping baby up near the table? Now it’s a Fleurville Dhs3,491

shining polycarbonate with a dishwasher-safe tray.

German furniture maker Living Jewels has designed a range of

ultra-modern furniture for sophisticated kids who know their day

beds from their play pens. The brand is going to make its debut

early next month with a world-wide launch to happen in Dubai.

Cool, sophisticated toys in the playbox (a Prada stainless steel

(ecocentric.co.uk) say as much about the parents as the children,

babies whose parent or parents were designers themselves.

Take the Oeuf baby lounger, which is a minimal bent wire and

canvas-covered contraption. Designed by Sophie Demenge and her

act of ‘desperation’ after they were given a Fisher Price baby chair,

the Oeuf lounger apparently ‘levitates the infant in artistic purity

and any bouncing is powered solely by the baby’.

Greece to start designing her own range of babywear. After all, baby

princes and princesses need their own couture line, too, and while

many fashion houses often made special one-off dresses and suits

for wealthy clients, nowadays children have their own collections. “I

seeing a child dressed as a child,” said Marie-Chantal at the opening

of her first store in the US.

Currently, her clothing range can be found in the UK, Japan,

Europe and the US. The line is characterised by classic fabrics

freshened up with playful colours and patterns for a more spirited

modern look. Having four children of her own, she designed with

them in mind and her collection is for “everyday use, for tea parties

and birthdays, as well as school.”

With the social life of children expanding beyond school and the

nursery, it’s no wonder we are witnessing the rise in designer style for

on to a lucrative market. In Dubai, for example, Laura Biagiotti’s aptly

in Saks Fifth Avenue and was attended by Biagiotti’s daughter Lavinia,

as well as the Italian ambassador to the region.

While the themes on the catwalk were a cacophony of sunny

clam-diggers, the audience was mesmerised by the three lines for

These confections are all included in the burgeoning children’s

department, but the diplomatic presence underpinned the

economic value of such an event.

Likewise, other designers have started baby lines because of

celebrity friendships and 2006 will be remembered for two celebrity

babies whose style both reflected that of their parents.

The much-anticipated photographs of Suri Cruise did not

disappoint. At the wedding of her parents, Tom Cruise and Katie

Holmes, she got to wear specially designed dresses by Giorgio

Armani and for her first ‘close-up’, in Vanity Fair no less, she

Brad and Angelina’s daughter, Shiloh Nouvel Jolie-Pitt, on the

other hand is undoubtedly a rock-chick. Her Babygro was über

cool for her HELLO! exclusive and featured a skull and cross bones

design. This sort of music-inspired fashion has been catching on

nursery. Did you realise, for instance, that she has been quietly

writing five books over the past few years, including The English

Thieves? With Kylie rumoured to be writing her own children’s

fairy tale, no doubt other celebrity mums like Gwen Stefani or Tana

an adult model of shoes in children’s sizes for girls and boys, rather

than launching a children’s collection. These sneakers will be in two

different colours and will be in the Dubai store by this November.

It may only be January now, but no doubt come November these

items will be on several lists for Eid and Christmas presents! ■

DESIGNER <strong>KIDS</strong> The rise of the ‘yummy mummy’ has spawned a number of beautiful designer-clad babies in our midst. Penny McCormick checks out the rise of the ‘mini market’. 100 EMAAR PROPERTIES MAGAZINE 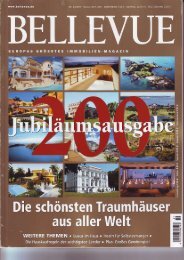 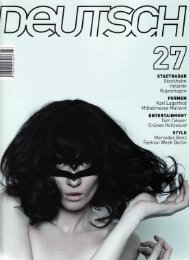 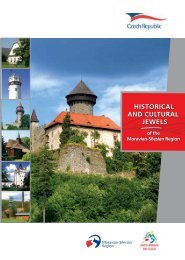 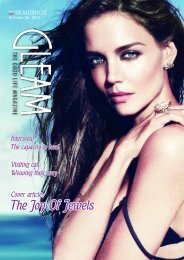 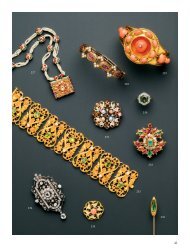 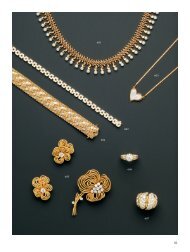 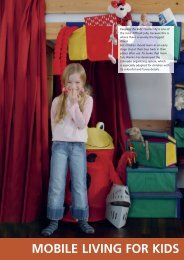 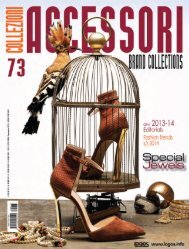 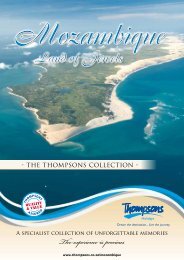 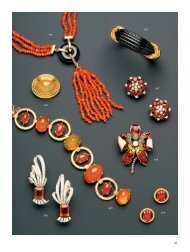 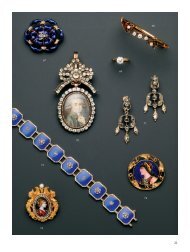 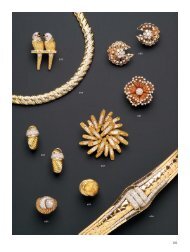 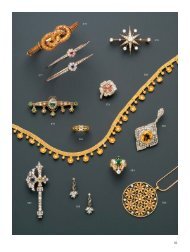