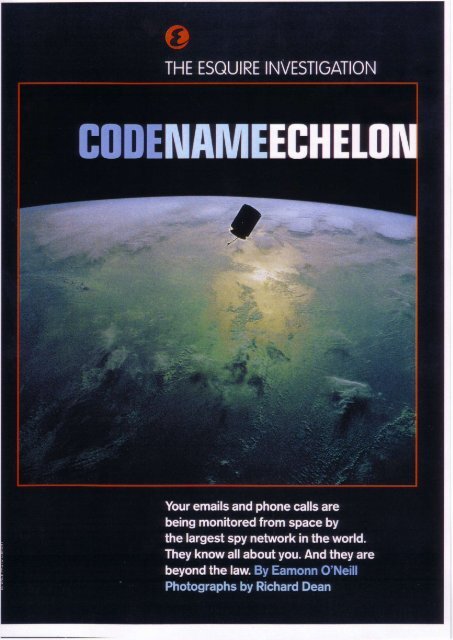 Vista, back comes the material.

"Dictionary sounds weary when he speaks. He has a conscience.

That weight compelled him to write

regularly. In this fashion, immensq complex about the fact that these organisations in the

For anyone researching the subject of

The whole operation is run by the NSA, Echelon, speaking to someone like Mike

with its headquarters in Fort Meade, Frost is a relief He maintains there are many

more like him who want to speak out but

of reports and finally dissemination to ils

very fine line. Most of the things that I'm

The only authoritative book ever written saying [are] a judgement call on me." His

"Most Americans have very little ideaofwhat

the NSA is," Bamford told me. "There's won't divulge anything that could put an

individual's life in danger at home or abroad;

book from the NSA. And the NSA is three codes or code breaking. But he remarks,

"When I was in a foreign country eavesdroppingon

The writer Duncan Campbell, now based

at the Electronic Privacy Information Centre the safe conflnes ofthe Canadian Embassy, I

in Washington DC, recently heightened knew damn well I was breaking the law."

his landmark European Parliament years to become even partially visible. It

The exact nature of Echelon has taken

He told me: "ft's attracts abstract descriptions that make it

not legal. lt is the business seem like an all-seeing, all-listening, allpervasiv

of spying... Conventions, including the

privacy or colrespondence. And yet that's by computers. This dlows thesystem to cope

That's not what the NSA says. Call their

HQand you'll be told: "The with only a few staffoverseeing thern. Maybe

NSA does not that's why Echelon feels like something out

comment on actual or alleged intelligence of a novel or movie, something easily dismissed

as a paranoid fantasy - until you hear

activities. Its activities are conducted lvith

the highest constitutional, legal and ethical what Mike Frost has to say.

standards." The UK's MoD spokesperson tough. I coped with it by getting addicted to

in Whitehall was only slightly more forthcoming

about Menwith Hill's activities: I haven't had a drink now in over l0 years."

alcohol... I became a roaring alcoholic. But

"It's a communications facilitS part of a A few days prior to talking to Frost, I'd

the US and UK and serves both UK and embassies in Kensington, London. You only

NATO interests. It opelates with the full have to glance up at the roofs to spot sophisticated

knowledge of HM Government and UK

have some intercept capability. Some fulltime

Laws are, as Frost admitted, being broken.

material that exists about the NSA is that

from people who've worked for it.

ex-spy, is one ofthe very few prepared to go

on the record. Frost lvas employed by the

No judges have been approached for rtrarrants,

no target is legitimately suspected of

having done anything illegal. Some countlies

villingly help out their allies. He tells me

about a startling request his depaltment

received in the early Eighties which he

Margaret Thatcher: "GCHQasked us if

we could do something to help the Prime

A Canadian rvent over to London, housed

himself in Macdonald House, and started to

intercept the frequencies that were giv€n to

us by GCHQ To my knowledge it was a successful

do it because there's complete deniability in

your country because they can stand up and

That's why Echelon is attractive: it's the

missiles that "take-out" the

hide the civilian fatalities in real war any

more than it masks the bin-raking activity of

intelligence gathering nor conceals the sordid

process. Yet, so successful is Echelon that it

can hardly handlc the material it gathers, as

stuffis not the problem: solting it out is."

For years it's been believed that security

that will listen for certain target words

in telephone conversations and automatically

start recording when it hears them. Frost

"A lot ofmoney, a lot ofengineering

went into the voice recognition system

ofselection... In those days they were able

to get the computers to recognise a voice that

had been plogrammed into the computer

previously." Frost has used this equipment:

it works. However, he recalls one amusing

incident where a telephone number was

being spat out by the computer because a

voice on the line constantly used the word

mortician's phone and he was using the word

technology has been used since the mid-

Nineties. IfEchelon has a recording ofyour

conversation. The NSA is devising a system

to recognise keywords, ironing out problems

caused by accents and ambient noise.

Alleged recent targets of the NSA/

Echelon spying operation have been organisations

International, and individuals including the

of Wales. The latter was targeted because of

her work relating to the banning of landmines.

"It would fhave been] easy to get her,

she had such a distinctive voice..." says Mike

Frost. It's been alleged that the tapes ofher

private calls released to the press in the

Nineties may have come fiom Echelon.

Nlore information about this UKUSA

Iistening system emerged in 1992 when

ofspying on charities such as Christian Aid

and Amnesty. Another British human rights

organisation Liberty was also targeted by

the security services. John Wadham, its

director, told me: "We know thatLiberty was

under some kind ofsurveillance by MI5. We

took our case to Snasbourg and again the

Government had to bring forward legislation...

to regulate the activities of MI5...

There's a complaints mechanism set up

under the 1985 act which has never upheld

one single complaint since it was set up"

- an average ofseven every working day. In

Yet much ofEchelon's surveillance is done

illegally. The number ofwarrants issued and

means it can gain access to such material by

forcing its suspecto hand over the encryption

key, or the information itself This puts

the onus on the target ro prove his innocence,

thus r€versing the burden of guilt.

Shockingly, until the beginning ofthis year,

software from the main US companies was

about cryptographic security systems being

built into internet and email software by

Microsoft, Netscape and Lotus. The companies

agreed to adapt their software to

outside the US." So, if you weren't a US

citizen, the NSA could peer straight into

The NSlfs secretiveness has led to accusations

that it uses Echelon to help US

companies in foreign business deals. They

that is passed on to US cornpanies. It's never

been a secret that from as far back as the

Seventies the US has put its economic intelligence

priorities on a par with diplomaric,

Echelon was allegedly used by the US to listen

in to deals between the European Airbus

and the Saudi government. Blibes changed

the US government's ears via the NSA, they

New information uncovered by the US

the US government utilises Echelon in this

process. It gives a lie to the official claim that

intellicence is not used for the benefit of US

has always denied passing on

any information that could

assist US companies which

it comes across during its

That is not strictly true:

instead the NSA passes the

information to another government

intervenes in a deal - eg,

where bribes are on the table

- and says that the whole

arrangement should be called

off unless the host country

wants its relations with the

US to go sour. Inevitably,

and it's US companies who

are always in the strongest

The use ofeconomic intelligence

"A number of countries...

including some of our oldest friends, are

way to contracts that they cannot wln on

merits... Rather frequently what happens rs

that when the contract is re-bid, sometimes

Sometimes not. But we calculate, really very

conservatively, that several billion dollars a

year in contracts are saved for US business."

This has enraged many European countries,

including France where several commercial

use ofEchelon are currently pending.

Could the US be using the Echelon system

to spy also on the UK, one ofits "oldest

friends"? Could a US employee in Menwith

Hill be eavesdropping this very minute on

conversations being held in Whitehalli I put

this question to Mike Frost. "IfI said to you

that the US was perhaps eavesdropping oo

Tony Blair, how would you respond?"

Frost didn't even pause: "I would say they

That's the high price the UK pays for

being a member of the exclusive Echelon

club. Thanks to technology, the more

independent we rhr[ we're becoming, the

just yet you can be sure - courtesy of the

and funded by the US