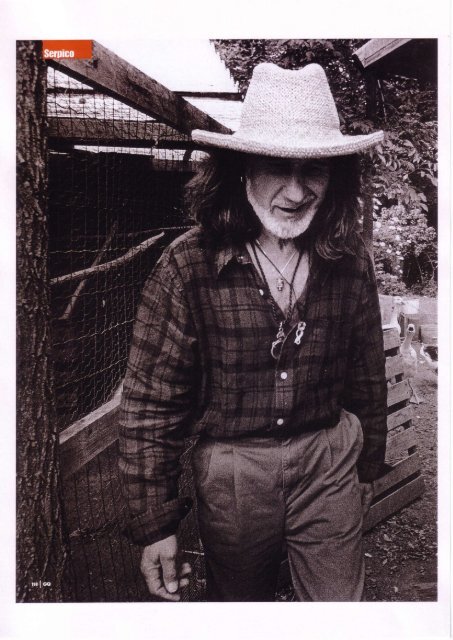 'm in the boardroom ofan upmarket

surounded by some very angry cops.

They're also intensely worried. For

the past fe" days. One tells me he has been

sickwith worry. Literally. The reason is his

undercoverjob he discovered many oF

themwere corrupt in more rvays than he

could possibly have imagined, and now

a fellow of6cer, is standing by

also. Butuntiltoday the most important

piece oftheircrusade was missing. A leader.

They all knew exactly who they wanted

to 6llthat role, and thrs afternoon he

his hand outstretched, their rvonies

name is Frank Serpico. And, as oftoday,

he's back in business.

ln the €arly S€venties, amid the mud of

loved it and when they made the film in

FrankSerpico had graduated from $e

police academy ur r95o, hopeful and

idealistic. \0ithin days "on the job" he

sleeping on the job; bibes from speeding

drivers, and so on But Serpico stayed

clean. So clean he even carried out arrests

ofFduty. As a result, heivas ostracised.

He fought back, embracing Sixties

escherving the normal "we atl stick

togethel'police life. And when he realised

knew he had to tell someone about it.

:rpproached his most senior officers. They

ignored him. He thendid the unthinkable,

wentoutside the police department to

the Mayor ofNervYork's assistant - who

Burnham, a respected reporter from the

announcing an unprecedented scale of

police corruption made the front page.

Despite beingcalled a "psycho" by the

police commissioner and 6nding a live >

hand-grenade addressed to him under

on working undercover. Despised by other

officers, itwas only a matter of time before

wentwrong and his back-up was strangely

reluctant to, well, backhim up. Hewas

He clung to life and survived. After his

release from hospital the Knapp

corruption was ortanised, with Serpico the

about the corruption he'd witnessed and

the problems he'd had tryingto fightit.

Everyone listened. They even clapped.

In the intervening z5 yean, rumoun

abounded as to his fate: I heard he was

His story seemed to srop dead at the end

in the blanks. Butlwanted to.I spent

cranks and weirdos. Finally I got lucky and

Ibund his nephew, a no-nonsense

nreeting. But even as I boarded r plane to

Ncw York I las still in the dark aboutwhen

The phce where we've aranged to meetk

nronrent I see him. "He's mind-blowingly

hangaround his neck, as does a dragon'shead

from his left ear- it's intricately cawed and

endurence athlete and stands about y'9"

with the thick, shoulder-length hairand

An old hippywith an edge. An edge in the

Suddenlyitt allover. He announces he

has to leave. Anothermeetint is arranged.

A new location is laboriously chosen.

I'm Ieft alone on a street-corner with a

wondering, for all my research, exactly

Because it sure as hell wasnl Al Pacino.

"The callthatwent in was a callby a

civilian, it was a'Ten-Ten'- investigate

shots 6red.l know the man that called it

in, hewas consoling me while Iwas laying

on the floor. Hewas an old Puerto tucan

lumbered up the stairs and I heard one of

Frank Serpico touch€s on the point that

Ifthey had, theplacewould have been

Instead theyjust r€ported a "Ten-Ten",

when the pinned-down Serpico had

pleadedwith them to do so, andwho

subsequently didn't send out that alf

evidence befbre a police board. Both

Merit by the NYPD fortheir part in

Serpico stares out the windowand

In the inteflening days I've been to

watch him play in an African drumming

introduce a britde edge to our

conversations. At one point I was appalled

to me. He muttered sonrethinSabout me

The day b€fore this trip to NewYork,

in the rvoods. He seemed vulnerable and

nervous showing me around, giving me

the clear impression that he rarely invited

statues on upturned tree-tops and his

sculptures. A private place forhealing and

to outsiders. I was gratefulfor his trust.

"The storyof the butterfly, you know.

I went into my cocoon. I went away because

I wanted peace and qr.:iet.I was healing

myself physically and psychologically."

that flourished around the time that the

hitmovie abouthis life was made. He

s€ems bitter about that particular court

battle and onlysees hi son "once in a

while". He continues, "Hellike his

mother. AIlhe thinks about is material

stufl He changes his name to Serpico

when it\ convenient for him."

because itwas h elping people. It was an

honourable profession, at lsst the kind of

cop that I wanted to bewas..- To be out

th€re helping people in need is a public

service. And anybody that doesn'twant to

Too many people take thejob because

the outskirts of the city of New York.

Is he in touchwith the situation

inside the current New York City

Police Departmentl He bristles at the

department? I know what I went through

overthe country from copsrvho are sick

do something about it. The honest cop is

tired ofbeingabused by the system."

away. Het ahvays been around to quietly

and guidance. However,rvhen he testified

before a City Council comn]ittee on the

need fora nerv independent board to

was reeling from allegations involving the

alleged assault by fourofiicers on a Haitian

clainred the cops had rammed a nightstick

into his rectum. And anotherscandal

He thinks fora fewseconds. "Because there {werel criminal elements from

a cop. These guys already had the notion ofbeing dishonest.Ifyou don'thave

difference does it make ifyou have a uniform on ornot?"

We park in downtown Manhattan and bolt through the dorvnpourinto that

and detectives. For legal reasons, I cannotfelate in detailwhat is specifically

discussed during this meeting, exceptto say that it concerns a theme the Buest

ofhonour is all too fanriliar with: poiice corruption on a staggering scale. The

olficers I meet today arr the ones who refi:sed to go along*ith it. One tells me

flesh - in LasVegas, posingwith a local madam. The guywas the head oftheir

One ofthe lawyers presentat the meetingsays the conr.rptpolice officers are

may counton to save yourlife in a situation," he explains.

with distrust... And, psychologically I mean, rvhat happened to me tookme a

The meeting Fnally breala up. The cops pose forphotographs with

Ten minutes laterl'm standing with him on thc stre€toutsid€ the hotel. Hc

has another appointment in thc city this timc with his family. We embrace

and sav a hunied farewell.

among the crorvds. Then, quite suddenly, I realise I can't seem to see him any

more. In an instant, Frank Serpico has become unrecognisable in the throng