Bonnie Pointer is an American R&B and disco singer, most notable for being founding member of the 1970s and 1980s family music group, The Pointer Sisters.

Levvy: How did you get the name ‘Bonnie’?

Bonnie: It’s a nickname, my real name is Patricia and my nickname

was Bunny. I changed it to Bonnie (laughs)!

Levvy: That was probably for the best (laughs). You founded the group, The

Pointers Pair. When was this and how did it become?

Bonnie: Yes. The Pointers Pair was June and me. I wanted to be a singer and an

entertainer. Ruth and Anita were working at their regular jobs and I was just getting

out of college. I wanted to help out and work with my little sister. And she also

liked to sing. So we formed the group The Pointers Pair back in the early ‘70’s.

Levvy: How did you land your Atlantic Records contract?

Bonnie: We came to Los Angeles to fill in for Ronnie Dyson who cancelled at The

Troubadour. We stayed in that hotel right across the street. The next day we

were called in to a meeting with Atlantic Records and they wanted to sign us!

East were there to manage our career. And they sure did hook us up!

Levvy: Your song, “Yes We Can Can” says a lot. But what did this song mean to

Bonnie: It’s kind of politically correct. And it means you can overcome and do

anything you put your mind to. You just need to focus and if you believe in it

and love it you can make a change! We were in New Orleans and we heard

that song by Allen Toussaint called, ‘Working in the Coal Mine’. And we were

inspired. So we recorded it!

Levvy: I remember during the ‘70’s you all dressed like the ‘40’s. And I always thought

that was a great look. Then it matched your rhythm to a degree. Whose idea was this?

Bonnie: We didn’t have many clothes and my parents were both ministers. But

we went to some of the sinners and got their clothes to wear (laughs).... We

were like “we want the clothes you had before you found Jesus!”

Levvy: It is so interesting that you wove this style of clothes into your ‘40’s

Bonnie: Well, I always loved the music from that era, like I was meant to be in that time.

Levvy: It is so interesting that The Pointer Sisters won a Grammy for Best Vocal

for a Group for your song, ‘Fairytale’ in 1974. This was a crossover song that

also garnered a Grammy Nomination in the Country Music category.

Bonnie: And to top it off, ‘Fairytale’ was recorded by Elvis and is on his album, “Trouble”.

Levvy: One of my favorite songs was one you performed as a solo and that was,

‘Heaven Must Have Sent You’. What did that song mean to you at the time?

Bonnie: Let’s see, when I signed with Motown I was looking for songs to sing

and my producers and I decided on that song. It was first done by The Elgins.

So they wanted me to redo it. Mr. Barry Gordy was producer on that song. The

song was a bit slow and I was driving down Sunset, and The Village People came

on the radio singing ‘YMCA’ and I immediately said “you know what, we should

do ‘Heaven Must Have Sent You’ with this beat!” It was a disco dance beat!

Levvy: I saw that you performed on Soul Train. I interviewed Linda Clifford

recently and she told us some stories from her Soul Train adventures. Do you

have a particular moment from that show to share?

Bonnie: I just know that they feed you a lot of chicken when you go! (laughs) One of my

choreographer for some time. So I used to take dance lessons from the Soul Train gang!

Levvy: So that is where you got all those dance moves I have seen you do! Did you

dance the day that The Pointer Sisters got a star on The Hollywood Walk of Fame?

Bonnie: Oh, we did have a party! And what memories from that day. It was a

joyful day. I have to polish it up now and then because a lot of people walk all

over my face (laughs). I should put a little rope around it and a sign, “detour”!

Levvy: I was filming your show in Cleveland last year in front of 45,000 screaming fans at

the Gay Games 9 in the Quicken Center. How did you get involved with the games and

Bonnie: Our management was contacted and we have always supported gay

rights and we thought how fun this would be! It was a thrill to see all of the

youth at the Gay Games. So happy to see them reach their goals and dreams.

State Park and it was for Sylvester. We were the bridesmaids! We did that song

with him, “Mighty Real”. We did several other songs with him as well. So I have

been with the Gays for a long time!

Levvy: Bonnie, when you all sang the song “Jump for My Love” I have never

seen or heard so much love in any stadium...WE WERE ALL JUMPING! Thanks

for the great memories! As a last question I like to ask, what is it you like best

Bonnie: Oh my, the weather, the people...it is so laid back there. I mean chillin’. It

is a fun place and it is very classy! Also there are the spas! And the food is terrific!

Levvy: Speaking of great food, Bonnie, you will be performing at TRIO

Restaurant’s 6th Anniversary on November 9. I will be there with you!

Bonnie: We will have to share a dessert at TRIO!

A portion of the evening proceeds go to 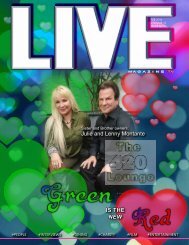 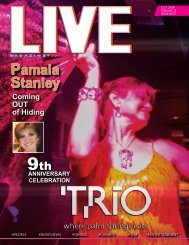 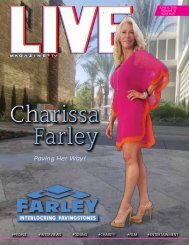 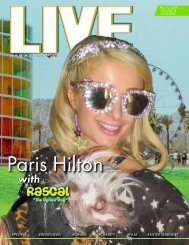 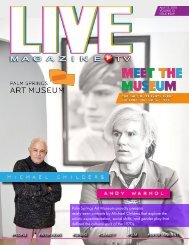 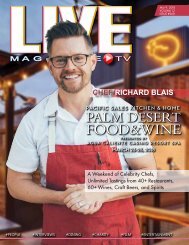 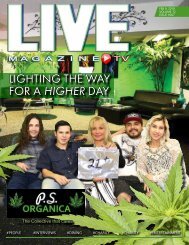 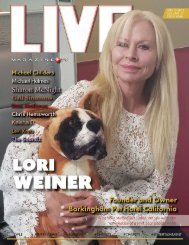 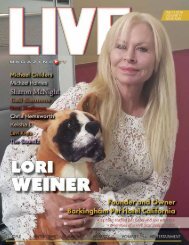 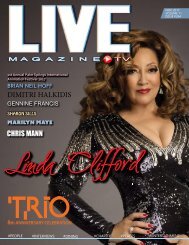 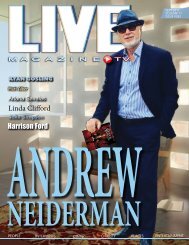 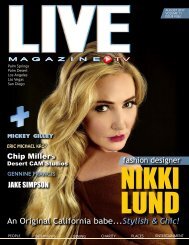 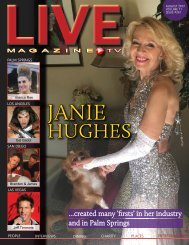 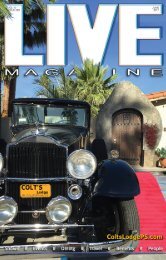 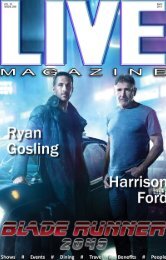 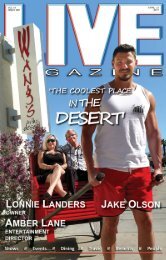 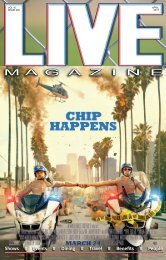 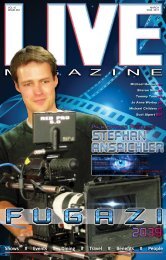 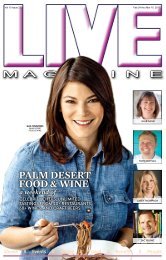