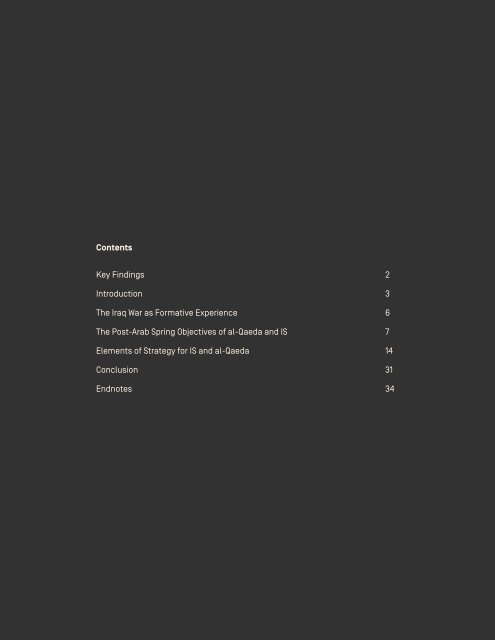 The Iraq War as Formative Experience 6

The Post-Arab Spring Objectives of al-Qaeda and IS 7

Elements of Strategy for IS and al-Qaeda 14

About the Authors Daveed Gartenstein-Ross’s academic and professional work has focused on understanding the evolving role of violent non-state actors in the world, with a concentration in al-Qaeda and the Islamic State. He is a senior fellow at the Foundation for Defense of Democracies and the chief executive officer of the consulting firm Valens Global. An adjunct professor at Georgetown University and lecturer at the Catholic University of America, Gartenstein-Ross is the author or volume editor of nineteen books and monographs, including Bin Laden’s Legacy, which Georgetown University terrorism scholar Bruce Hoffman described as “one of the few books to probe systematically [al- Qaeda’s] strategy and its effect on the U.S. and its allies.” Gartenstein-Ross has also been published widely in the academic and popular press, including in The New York Times, The Washington Post, The Atlantic, Foreign Policy, and the peer-reviewed journals Studies in Conflict and Terrorism and Terrorism and Political Violence. Gartenstein-Ross holds a Ph.D. in world politics from the Catholic University of America and a J.D. from the New York University School of Law. Bridget Moreng is an analyst at Valens Global whose work focuses on monitoring the threats posed by the Islamic State. She has co-authored several pieces, including a monograph on Tunisian jihadism published by the International Centre for Counter- Terrorism–The Hague, articles in Foreign Affairs and Politico, and chapters for upcoming books that address the Islamic State’s history and also Arab states’ policies for addressing the burgeoning challenge posed by foreign fighters. Moreng received her bachelor’s degree from the University of Colorado at Boulder. Acknowledgements The authors would like to thank Simran Maker, Karly Nocera, Ravi Patel, and Natalie Rozet, who contributed to the research for this study. Nathaniel Barr is an analyst at Valens Global whose work focuses on violent nonstate actors in North Africa, the Sahel, and the Horn of Africa. Barr has co-authored four monographs, including a report examining the Islamic State’s propaganda strategy, and has been published in Foreign Affairs, Foreign Policy, and Jamestown Foundation’s Militant Leadership Monitor. Before coming to Valens Global, Barr worked as a research assistant with the Western Jihadism Project, a research project funded by the National Institute of Justice that explores radicalization and salafi jihadist networks in the West. Barr received his bachelor’s degree from Brandeis University. Jason Fritz is a senior researcher at Valens Global and a doctoral student in the Department of Justice, Law and Criminology at American University’s School of Public Affairs, where his studies focus on the intersection of political violence and policing in late- and post-conflict states. Fritz was an armor officer in the U.S. Army, and served multiple tours of duty in Iraq in positions ranging from platoon leader to brigade planner. Fritz has written extensively on terrorism and insurgency, with his work appearing in such publications as Small Wars Journal and War on the Rocks, where Fritz is also a senior editor. Fritz graduated from the United States Military Academy with a Bachelor of Science in Mathematical Sciences. About New America New America is dedicated to the renewal of American politics, prosperity, and purpose in the Digital Age. We carry out our mission as a nonprofit civic enterprise: an intellectual venture capital fund, think tank, technology laboratory, public forum, and media platform. Our hallmarks are big ideas, impartial analysis, pragmatic policy solutions, technological innovation, next generation politics, and creative engagement with broad audiences. Find out more at newamerica.org/our-story. About the International Security Program The International Security Program aims to provide evidence-based analysis of some of the thorniest questions facing American policymakers and the public. We are largely focused on South Asia and the Middle East, al-Qaeda and allied groups, the rise of political Islam, the proliferation of weapons of mass destruction (WMD), homeland security, and the activities of U.S. Special Forces and the CIA.