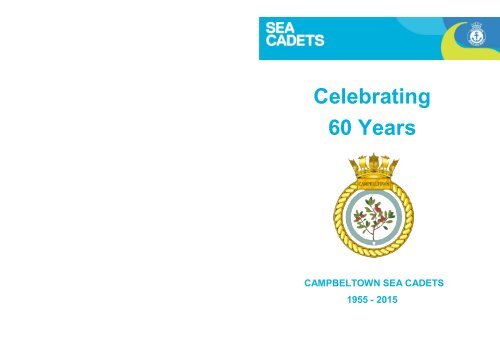 We wish to thank former members

of Campbeltown Sea Cadets for

providing some of the

from the booklet ‘Campbeltown –

people in Kintyre have benefited

from the Sea Cadets and

although the Unit has seen its

continues to play an important

role in the community. Despite

the Unit being one of the most

remote in the Northern Area,

with a strong group of staff and

managed to accomplish some

amazing achievements and has

defied the disadvantages of

being in a remote area.

The cadets originally met at the

Boatshed at the Quarry Green,

then at the old TA Hall (now

demolition of the TA Hall the

Unit met for a short period in the

parades at the Cadet Hall at

Campbeltown, to honour not only the

town of its birth, but also the heroic

ship’s company of the lost destroyer.

The name HMS Campbeltown has a

service during World War Two, with

honours for the Battle of the Atlantic,

St Nazaire in1942, known as Operation

Chariot where she was deliberately

blown up in an attempt to destroy a dry

Beattie during the raid for which he

received the Victoria Cross for his

strong links were forged between the

Royal Navy and local community. She

“Don’t turn down the Sea Cadets” was the

headline in the December 1955 edition of

the Campbeltown Courier. The newly

at Quarry Green to hold parades, but was

rejected by the Town Council. Councillor

Anderson said Campbeltown was a

seaport town and it was most important

that the sea cadets should have facilities

for training. The Provost agreed this was

a matter of some public interest and

suggested the matter should go back to

the committee for further consideration.

“They are a public-spirited body and they

are going to do a lot of good in the town.

I think this should be reconsidered.”

“No”’. The application was again turned

Finally, the Sea cadets were offered the

let of the lifeboat house later that year.

celebrate the achievements of cadets who have excelled in various areas.

However, the icing on the cake is the Unit being awarded the prestigious Burgee

for 2015, the highest recognition of achievement to a unit in the Sea Cadet Corp.

has been awarded with the Burgee and so proud of all the Cadets, staff and

volunteers. This could not have been achieved without the hard work and

credit to the town and to their families. Campbeltown Unit has been helping young

people gain vital skills for the last 60 years and with local and national support,

we hope to be able to do so for many years to come.”

In 1978 the Unit received its fourth

was presented with its colours by a

former commanding officer of the

A new dimension was added to the

proposed formation of a Girls’

was two years later that this first

year, seeing the start of a drum and

bugle band and the weekly

performance of the Ceremonial

Sunset on the Old Quay through the

achieved the highest marks in the

area for his advancement

examinations, and was presented

with the Ben Line Award before

leaving the Unit to enter the Royal

This was also the year the Unit

received its first Burgee. The

Burgee, a flag hoisted to the top of a

ship’s mast, was awarded only to

standard of efficiency. It recognises

the quality of training offered to the

cadets and the administration of the

group including how well the

A historical visit by two officers

from the Sea Cadet Unit

Campbelltown, Australia. At a

bugle band made their first public

drummer, LS Allan Shaw and their

they put on an impressive display.

commanding officer of the

commander of the Northern Area

visited the Unit for their annual

With JS Deborah Brodie, the

winners were (from left): LS Alan

Barrett, who gained the newly

the most promising Cadet in 1980

and LS Andrew Carter who

received the Sailing Trophy for

being the Unit’s best helmsman.

captured the Port Division of the

whose fastest tying of a bowline

In 1981 the Unit received its second

Burgee, which was presented in a

But the best was yet to come when

their continued variety and

excellence of their activities led to

the award of the coveted

Stephenson Trophy for the

ship visited Campbeltown and the

together for an impressive march

through the town and combined

40 th anniversary celebrations of the Royal Navy raid on the French port of St Nazire. It was during this raid that the

destroyer HMS Campbeltown was blown up, destroying the dock gates. Cadets and officers are pictured sitting

under the ship’s bell from the destroyer.

A memorable trip to France, where the

celebrations of the raid on St Nazaire

by HMS Campbeltown raid. The ship

in the background is not just any old

naval ship, it is the Royal Yacht

Campbeltown to Portsmouth then on to

France. Cadets had the opportunity to

(the oldest naval ship in the world), and

HMS Euraylus among other activities.

Mementoes on departure from the Unit were

Thanks to the Royal Navy’s

invitation to them to spend

some time on one of the

out of Campbeltown Loch with

and Michael Russell all aboard.

Trafalgar Night, the night when the

Nelson’s victory of Trafalgar. The Unit

celebrated with a dinner at the Ardshiel

Hotel. During the evening, John

McTaggart was presented with a gift to

involvement with the Unit.

Commander John Rainer of the Royal

presented the Unit with a Pennant for

their annual assessment, through

Double victory: where the

teams both achieved first in

Annual Inspection being carried out

Northern Area Officer of the Sea

in charge of the Girls Nautical Training

Contingent in the UK, paid the Unit a visit.

Pictured here with the Girls’ Nautical

An Ambassador for her country – Jillian

Hanna was chosen from the entire UK

represent the organisation at an

on board TS Royalist while on a visit to

the TA Hall. The Unit welcomed the

Eight members of the Unit met

HRH Prince Andrew, the Duke of

York (right), when they sailed with

From the right are J Glover, I

Sheridan, the observer in the

Cadets had the opportunity to

step inside a helicopter from

On board TS John Jerwood

Campbeltown was awarded a

Burgee as a mark of excellence.

It was presented to the Unit at its

The Decommissioning of HMS Campbeltown

In an emotional farewell, HMS Campbeltown slipped her moorings and sailed past

the heart of the town for the final time. The events held during this celebratory

when the ship first visited the town in 1989.

townsfolk and crew and said: “It is hard to imagine any other small town in the

warship. There have been many highlights, but for me the town parade and

church service held in the ship’s honour were the most moving; they brought into

Today, the Unit may be smaller

in numbers compared to its hay

to inspire young people to

achieve and to excel in life. It

continues to promote the core

values of the Sea Cadets of

Integrity. Cadets are given the

in a range of areas, all of which

boosts their confidence as they

prepare for the rest of their

lives. There is now a good

number of cadets in the Unit all

year of achievements at

The unit is also delighted to

have achieved an efficiency

award for the 6 th consecutive

year. This is an annual

as well as the administration

and safety of the unit. Also

for the first time in the

history of the unit, a cadet

took part in the annual

joining the Massed Band of

the Sea Cadets in Trafalgar

Iain Cameron, being the first

cadet to achieve a RYA

the only person in the unit to

fantastic week’s voyage around the West Coast and Isles of Scotland.

cook/steward and experienced all the duties needed to operate a vessel at sea. Cadets

past the famous Corryvreckan whirlpool. Cadet Arbuckle was on the TS City Liveryman and

Cadet Cameron was on the TS Vigilant for their offshore training.

Friends and family were invited

to a special presentation

ceremony of the Lord

The certificate and badge were

presented by the Lord

Lieutenant of Argyll and Bute

Officer Cadet MacArthur is the

During the course of the week they performed in the Gardens

of Holyrood Palace for the Duke of Edinburgh's Award Gold

Presentations, a Beating Retreat in Montrose to welcome HMS

Montrose to the town, the Naming Ceremony of the HMS

Queen Elizabeth in the presence of Her Majesty and finally

performing at the Armed Forces Day Celebrations in Dundee.

more than 500 young people from across the UK

part in a spectacular display and parade. Crowds

were treated to performances including physical

training, pipes and drums by Air Cadets and an 80-

together to commemorate the centenary of World

War One with a parade in Oban. Also on parade

Cadets took to the water for their boating training

throughout the summer months and into the autumn.

Cadets were at various stages of training, from basic

competency to being able to take charge of a boat

the Trinity 500, a pioneer rowing boat, a safety boat

who were giving a taster session of sailing to cadets

who had not sailed previously. Apart from rowing,

On 27 th October, the Unit had the pleasure of

for Northern Area to their 2014 RNP. Along with

the inspection of divisions, family and friends were

treated to musical entertainment by cadets, and

evolutions which showed the Unit’s skills and

training over the past year.

During the course of the evening, presentations were also made to

members of staff and cadets. PO (SCC) Gannon received the

Cadet Forces Medal for a total of 24 years continuous uniformed

and his Sea Cadet corps Master Coxswain qualification. Finally, a

special presentation of a limited edition replica of the new Queen

Massed Band of the Sea Cadets who performed at the Trafalgar

The Pioner Multi, a new

versatility to a new level.

With a large deck space and

wide bow port, it will

essentially be used as a

training. Funded through the

Scheme of the Armed Forces,

the boat will also allow the

personnel on cruises around

Commanding Officer of the

Unit said, “We are extremely

pleased with the successful

application of funding to allow

the Unit to purchase this boat.

Not only will it improve the

boat training of cadets but

due to the boat’s unique bow

entry system, it is capable of

A total of 4 Junior cadets enjoyed a fantastic week

of training at Greenock but also plenty of fun, with

all of them gaining their Yellow, Green, Blue and

This is the first time the Unit had cadets entered

into the Area’s Archery Competition. Cadets

Walker represented the Highland District with

Cadets had a great weekend of

camping at Port Ban, where

they had to set up camp, before

This year’s winner was Able

Cadet Iain Cameron with a time

for the event! The trophy,

donated by the Commando

Association was presented by

We were delighted to receive

funding from Awards for All to

Arbuckle managed to take the

dingy for a ‘test drive’ on a

nationals. It was the Unit’s first to have a representative at this

Northern Area and performed against nine other bands from

different Sea Cadet areas at the Tower of London on Saturday

We wish to thank friends, family, volunteers, cadets and

staff past and present for 60 good years!

Thank you also to the many organisations who have

supported us along the way. 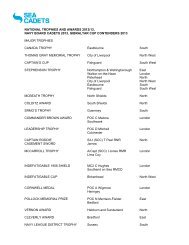 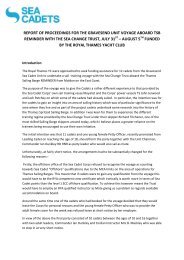 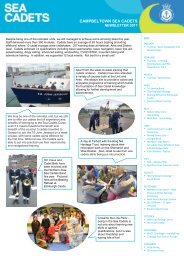