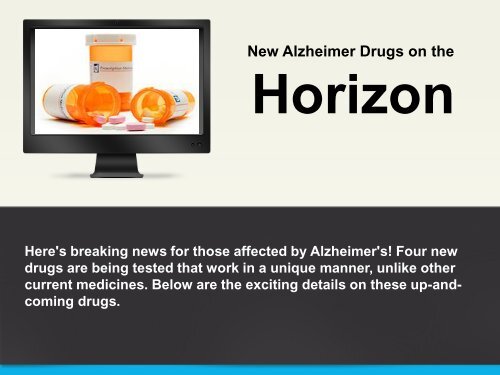 New Alzheimer Drugs on the Horizon!

Here's breaking news for those affected by Alzheimer's! Four new drugs are being tested that work in a unique manner, unlike other current medicines. Below are the exciting details on these up-and-coming drugs.
http://www.homecareassistancephoenix.com/

Here's breaking news for those affected by ong>'s! Four new

drugs are being tested that work in a unique manner, unlike other

current medicines. Below are the exciting details on these up-andcoming

The entities responsible for ong>'s disease are plaques and tangles.

Plaques are protein fragments called amyloid that accumulate between

brain cells. Tangles are twisted protein fibers that form inside the cells.

To see a diagram of plaques and tangles, go to

The development of plaques and tangles is a normal aspect of aging.

However, when the process becomes widespread, it significantly impairs

mental function. An ong>'s brain exhibits protein clumps in a

involved in memory and then spreads to other areas. Eventually, brain

in memory and thinking skills in the early stages of AD. The

medication is called Adu can mab. It works like an antibody, attacking

plaques. An antibody is a protein that identifies and neutralizes alien

The Adu can mab investigation was initiated in the summer of 2012. It

involved 166 adults in the early stages of AD. All the subjects had

evidence of plaque build-up. Patients were divided into four groups,

receiving either low, medium, or high drug doses or a placebo. In

March 2015, an interim analysis of the first data was reported.

The outcome at one year was monumental! The higher the drug dose, the

Low doses of the drug didn’t impact brain plaque. However, both medium and

Most of the study participants tolerated the medication well. Brain

scans of those on the higher doses revealed some brain swelling.

Although the inflammation did not produce symptoms, researchers

are concerned about future problems. Brain swelling was most

pronounced in patients carrying the gene for AD. Headaches arose in

22 percent of patients given the drug, appearing to be dose-related.

Aducanumab is a pioneer in the fight against AD. To date, there have been no other

temporarily but are unable to halt completely its progression. Aducanumab

The drug is the brainchild of the Biogen company, based in Massachusetts. Clinical

testing is in the final Phase 3 stage. This segment of evaluation involves a large study

group of 1,350 patients over five years. Thorough testing on a broad scale is required

before the drug can be marketed. Analysts expect that within three years, the data will

indicate whether Adu can mab is the "Goldilocks" drug, the "just right" formulation

that will resolve AD. Researchers are optimistic regarding the drug's potential.

Also in the testing phase are three other medications, solanezumab,

Data from spinal fluid tests and brain scans are promising.

Crenezumab - The Genentech company has formulated this drug, targeted to mild

AD. Research is now in the Phase 3 stage.

Current drugs work by relieving some AD symptoms. However, they do not address the

cause of AD or delay its advancement. The FDA has approved two classes of drugs for the

treatment of ong>'s disease. Until alternative medications are marketed, these are the

Each drug acts on a different brain region, so physicians sometimes prescribe both

simultaneously. The medications are also designed for specific stages of AD - mild,

moderate, and severe. These delineations are based on mental function test scores,

measuring memory, thinking, reasoning, and awareness of time and place.

Plaques and tangles decrease levels of acetylcholine, a chemical involved in

memory, alertness, thought, and judgment. CIs prevent the breakdown of

acetylcholine. Unfortunately, the drugs are unable to stop disease progression.

Therefore, the drugs lose their effectiveness over time.

There are three FDA-approved CIs. In clinical studies, all of them work equally

well. However, individual response varies regarding drug performance and side

effects. Symptoms include nausea, vomiting, and diarrhea. Side effects are

reduced when a drug is started at a low dose and gradually increased. Taking a CI

Aricept - treats all stages of AD. It is taken once a day in pill form. It is

typically well-tolerated, with side effects occurring in only 20 percent of

syrup. It has been shown to slow cognitive decline for up to three years.

Exelon - for mild to moderate AD, available as a skin patch, pill, and

syrup. It is comparable to Aricept regarding efficacy but may cause more

Under the brand name Namenda, this medication addresses moderate

to severe AD. It has a different treatment mechanism. It regulates

glutamate, a chemical involved in learning and memory. Namenda is

formulated as a pill and syrup. Common side effects include a

Alzforum has the most current information available on the four drugs. The

website's August 2015 report summarizes the outcome of this year's

Aducanumab - Researchers are trying to determine the optimal dose of Adu

none of them quite hitting the mark. The 10 mg dose is most effective against

plaques but causes brain swelling. It was thought that a 6-mg dose would be

ideal, but it has not delivered the desired outcome. Phase 3 of the study will

progression! Phase 3 for solanezumab will be complete by October 2016.

a biological indicator of disease. The trial has promoted a greater understanding of the

nature of AD. Patients with severe AD have had a positive response at a high dose, with a 5

percent reduction in brain plaque. Roche is moving into Phase 3, to assess further the effects

Crenezumab - This medication does not cause brain swelling, enabling use at higher doses.

The drug shows promise as a treatment for mild AD. It's also being tested as a preventative

drug, the first of its kind! Study results will be forthcoming in 2020.

destruction and cognitive decline. Conclusive data is three years away. The

outcome of solanezumab will be evident one year from now. Results of

As research efforts get closer to a cure for AD, we can be grateful for the

diligence of scientists. With their continued perseverance, we can look

forward to the day when AD is a faded memory.

care for seniors in Phoenix, AZ. We provide senior care services to elderly

you or your loved one.

ong> ong> ong> on the Horizon Here's breaking news for those affected by ong>'s! Four new drugs are being tested that work in a unique manner, unlike other current medicines. Below are the exciting details on these up-andcoming drugs. 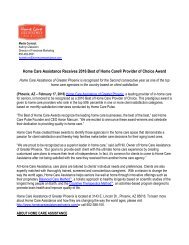 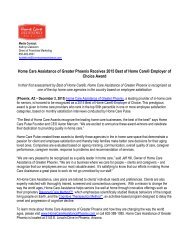 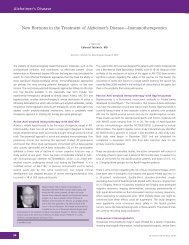