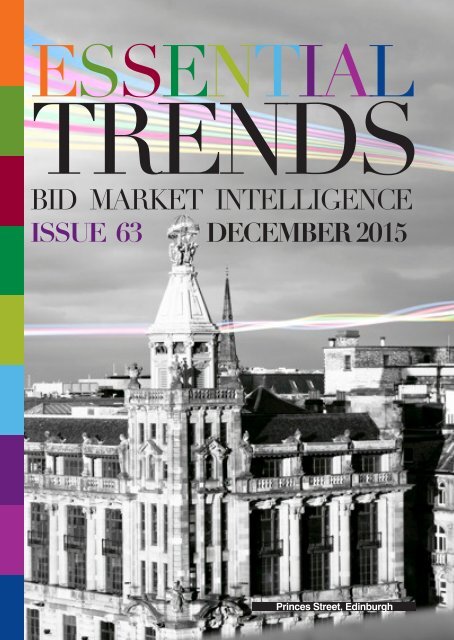 November’s figures for footfall and retail sales were a mixed

bag last month. Footfall performance was below 2014 and

the UK averages but retail sales were considerably higher

than both Scottish and UK averages. Hospitality figures are

sales, although showing positive growth, need to be viewed

with caution as many retailers have accounted for “Black

Friday” differently. It is hoped though, that this positive

trend in sales continues throughout December.

The footfall figures for November are disappointing, well below the UK

averages for both month on month and yearly comparisons. When we look

of over 12%. There were declines also in the core retail period of 4% and the

early morning period of 0.8% this November.

figures. Although October’s hotel occupancy was the same as the previous

year the revenue per room was higher than the last two years.

This is the final Essential Trends of 2015. Our bumper printed edition, which

includes December’s statistics, will be delivered to you in January.

And finally, all of us at Essential Edinburgh would like to with you a very merry

The latest available data for October 2015 from STR Global

shows that 86% of rooms were occupied in Edinburgh

during the month. The average daily rate for rooms sold

was £79.99 whilst the revenue averaged across all available

The latest data for October 2015

shows that occupancy was the same

as the previous year and revenue per

room was higher than the last two

years. The occupancy rate in October

Revenue per available room rose in

Comparing the last three years, a

pattern can be seen with peaks in

August for revenue per room and

dips in January for occupancy and

Looking at the year from November

figures than the comparator cities in

Scotland since the spring.

Edinburgh footfall figures for November 2015 are down by

was the busiest spot in the city centre

November 2015. Comparing this to

which is lessr than the national

average which decreased by 1.6%,

Monthly pedestrian numbers in the

They increase to their highest level of

the year in August and fall to the

and February before starting to

increase again over spring and into

the Summer months. In November

the last month in which figures are

from the previous month. The tables

below show footfall in the city centre

and a breakdown by counter area.

The daily information for the previous

month is also presented in the charts.

The UK footfall Index shows an

increase of 6.5% between October

decreased by 1.6% compared to

on the UK footfall, said: “Shopper

and instead sought to take advantage

and discounts which often ranged

across several days. As a result

November was the eighth consecutive

month in which shopper footfall

declined, and at a faster rate than the

“Those retailers with a strong

to shop in-store, at

home and on the

been well placed to

In November annual comparable footfall is down by 5.1% in

the city centre on last year, with a large decrease in footfall

during the evening period.

2015. This hides a lot of variation which we can see by breaking the day down

into three periods: morning; core retail hours; and evening hours. The most

noticeable change in November was the 12.6% decrease in the evening hours.

The core retail period this November was 4% lower than last year, and the

Overall footfall decreased by 7.8% compared to last month in the city centre.

In the evening period there was a decrease of 13%, the core retail period

decreased by 6.5%, and the morning hour period showed a decrease of

The chart below shows the change in

periods. Around nine out of every ten

visitors in the city centre are recorded

over this 12 hour period. The largest

evening period after 5pm where

footfall decreased by 9.8% on last

The change this November compared

to last month shows a decrease in

footfall numbers. In the time period

after 8am footfall decreased by 5.0%,

between 11am and 2pm footfall

compared to last month. The after

Edinburgh retail sales were up 4.4% in November

Edinburgh’s retailers were bucking the trend as sales for

Edinburgh’s Scottish peers fell 2.3% on a year earlier; for

the entire UK sales were up 0.7% which is still below the

on a sample of city centre retailers

that take part in the Retail Monitoring

Programme. Although the overall

figures are positive, it should be noted

that participants who reported

year-on-year growth may be

revenues in a different way from those

Programme reported an increase in

“November’s figures may hide a lot a

variation across the retail sector.

prepared this year for

chose not to take part

after the Black Friday

that would otherwise have taken place

David McCorquodale, head of retail at

KPMG, said that “the evidence

waiting for promoted bargains before

committing to spend. The unknown

element of this standoff is whether

retailers will feed this discount

addiction before Christmas, or, hold

their nerve and their margins.”

He added: “Most of the Black Friday

activity focused on electricals and

The SRC said when adjusted to factor

in the effect of online, non-food sales

rose 0.4% in November against a rise

news for the High Street at this time of

like-for-like basis, which strips out the

effect of store openings and closures.

the BRC, commenting on the UK

promotions, which were often

extended across several days, as well

as enhancing the customer

“As consumers and retailers continue

to adapt to the changing patterns of

omni-channel shopping, where the

and less relevant, this build-up to

Christmas is one of the hardest to

“The conversion of people’s higher

shouldn’t be taken for granted.”

at LJ Research, who manage this project on our behalf:

spaces the more opportunities for shoppers to find a space.

It should be noted, that the

transactions per bay during

trading hours and the average

length of time parked are derived

from transactions at parking ticket

machines, varies throughout the

year. The relatively low number of

daily transactions per bay is likely to

be due to the usage of the bays by

In the New Town over November

2015, the average turnover of parking

streets that are less utilised. It is clear

that George Street had the highest

levels of utilisation. This means that

the parking bays were used much

more than the average of the bays in

and St Andrews Square are all used

more than average for parking. The

other streets are used less than

charges are levied: Monday – Saturday 8:30am – 5:30pm in areas with lower parking

IBTM in November as part of the

VisitScotland stand – this is one of

the key European trade shows that

takes place in Barcelona and gives

CE the opportunity to meet with UK

and European buyers. CE had 53

Edinburgh alongside its members

2021 with an economic benefit of

over £55M. Over the last month

has secured 15 new conferences with

a combined economic benefit of just

productions a year; 40% of visitors to

the UK are inspired by images they

have seen on the screen.

a very successful year for filming in

Edinburgh with economic impact at

This is largely due to three largescale

One Of Us and The Secret Agent

filming in the city region for several

months each as well as setting up

production bases to support the

production in the city. We persuaded

these productions to base here

thanks to the locations on offer in

the city region, as well as being

able to demonstrate that we have

a quarter of Scotland’s crew base.

Nevertheless, without a dedicated

film studio it has been a struggle to

and we hope to have good news

about a studio facility for the city

region within the next couple of

during February, March and April

2016 have a combined value of over

passengers through its doors -

November ever at a Scottish airport.

passenger numbers from the same

levels as the height of summer at

many other regional airports in the

This success is largely due to

easyJet and Ryanair’s services to

represent our busiest ever November;

November– a quiet month in air

travel – on a par with what many other

regional airports do at the peak of

“This tremendous achievement is a

direct result of our commitment to

and improving the passenger

“This has been another recordbreaking

the growing success of both Scotland

and Edinburgh as a destination

which emphasises our position as a

“Edinburgh Airport is going from

strength to strength – with more

airlines and greater choice of routes

to London, the rest of the UK, Europe

and across the globe - and we are on

course to make 2015 our busiest year