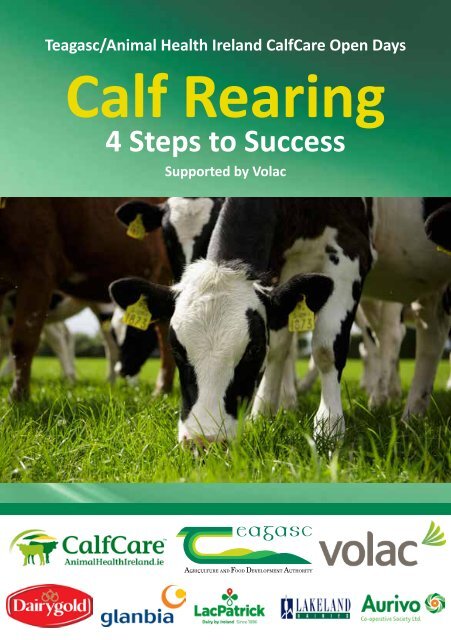 good calf management. Calves that get enough colostrum are less likely to get sick and

Use milk from the

• 1 st milking to feed calves within

Why is it important?

Colostrum (“biestings”) is the first milk that the cow produces. It is richer than normal

milk in many respects, but especially in its content of immunoglobulins (antibodies).

saleable from the first eight milkings.

Management of the scouring calf

year. Once scouring, a calf becomes rapidly dehydrated, acidotic, and low in essential

therefore, should involve rehydration, correction of acidosis, and replacement of

electrolytes. Some electrolyte products on the market, while assisting with rehydration

and replacement of electrolytes, often fail to effectively correct acidosis which is essential

to recovery of the calf. This has led to the introduction of new legislation across the

EU (EU regulation No. 1123/2014) which dictates a number of minimum requirements

that all scour treatments must conform to. These requirements include a Strong Ion

Difference (SID) of at least 60mmol/litre which will assist in correcting acidosis.

of water and electrolyte balance to support the physiological digestion”. Products with

an SID of less than 60mmol/litre will only state that they are “complementary feeds”. It

suitable for their requirements i.e. it will treat a calf with scour.

Causes and prevention of scour

approximately 15% of calf body weight i.e. 6 litres/day for a 40kg calf, below this will lead

to reduced growth rates. Scour in calves can result from inconsistent feeding regimes or

Table 1 outlines common causes and when clinical signs are most likely to occur. The

most important means of preventing scour outbreaks are;

litres for a 35kg calf. Use only the first milk from the freshly calved cow –

subsequent milkings (transition milk) do not contain enough antibodies to

fight off infection. It should be noted that 60–70 % of neonatal calves

clean and freshly top up with dry bedding. A damp, cold calf will be more

susceptible to infectious pathogens in the environment. Feed buckets must be

kept clean in order to prevent build-up of bacteria.

Cause of calf scour

Treatment of calf scour involves rehydration of the calf, replacement of lost electrolytes

and correction of acidosis. Teagasc, Moorepark undertook an experiment in spring 2015

requirements 1 . Treatment was also administered and monitored on a number of

and disease control. In all, 99 dairy calves, aged between 0 and 5 weeks approximately,

were studied. Calves were scored using the health chart outlined in Figure 1 and all

have lower feed intakes which invariably continue the cycle of dehydration and acidosis.

Blood pH and base excess was measured before and after scour treatment, the results

of which are outlined in Figure 2. The product was administered by stomach tube to

ensure that calves received the full dose required. Extra fluids over and above the normal

two milk feeds will assist with rehydration. Additionally, as the majority of sick calves

in this study were incapable of independent milk feeding, mixing the product with milk

served no additional advantage. The results indicate that treatment with this product

and full recovery of the calves from scour.

Figure 1: Blood pH (a) and base excess (b) comparison across normal and scouring

able to stand without

Interest in surroundings Interactive when

No feed intake (not

taking any of what is

No feed intake (not

taking any of what is

may not finish what is

10% of body weight (~4 litres/day). These ‘restricted’ feeding systems were intended

normal growth and are detrimental to calf health and welfare. A higher plane of nutrition

incidences of disease and mortality. In a recent Teagasc Moorepark experiment calves

milk. Calves fed 4 litres of milk were lighter at five weeks of age than those fed 6 litres.

degree that they can fully compensate for the lower supply of energy from milk. Feeding

target weaning weight. Furthermore, there was no difference in incidences of diarrhoea

between calves fed 4 litres or 6 litres of milk. Weaning calves earlier is desirable from the

farmer’s point of view as this saves labour, time and feed costs.

A number of experiments have been undertaken at Teagasc Moorepark comparing

whole milk and milk replacer. There were no differences in calf growth rates between the

two, however it should be noted that no waste milk was fed to calves and a high quality

generally not very digestible for the young calf. In general the higher the crude protein

content of a milk replacer the more expensive it is. An experiment was undertaken in

replacer. This was because the average daily weight gain of calves on the 20% crude

protein milk replacer was 0.6 kg/day less than the calves consuming the 26% crude

protein milk replacer (0.67 kg/day) from the birth to weaning stage. All calves were

given the same concentrate and grass post weaning; interestingly, when calves were 140

replacer. This suggests that calves should be well fed and high quality products used

during the pre-weaning period.

How soon can milk replacer be fed?

Diseases, such as Johnes disease, can inadvertently be transmitted through colostrum

and transition milk feeding. One of the main control strategies to minimise the spread of

Johnes disease is to implement a controlled calf management programme. This involves

each calf ’s own dam) to individual calves. Substantial labour input is however required,

calving simultaneously and separating colostrum and transition milk is laborious and

can be prone to error. One strategy to overcome this difficulty is to commence milk

replacer feeding immediately after the first feed of colostrum. An experiment carried

out in Teagasc Moorepark in spring 2015 showed that once calves received 8.5% of their

feeds of transition milk before moving to milk replacer (Figure 1). This suggests that in

Coccidia are single-celled parasites which are common in the farm environment. These

parasites damage the gut wall and if calves are infected with large numbers, severe

damage results and scours, straining and bloody diarrhoea can occur. Calves exposed to

ingesting coccidial oocysts (similar to eggs) and this can occur while housed or at grass.

In the calf, the parasites multiply and damage the gut wall. This results in thousands of

new parasites which are passed in the dung, contaminate the environment and infect

other calves. Coccidia are hardy, so houses and fields can remain contaminated for a

year or more. Stressors such as turnout, weaning and poor weather conditions may also

Coccidia are host specific i.e. coccidia from one animal cannot affect another animal

species. This applies even to animals as closely related as sheep and goats. Therefore

birds do not transmit coccidiosis to cattle.

dung samples to your local vet or laboratory. It must be remembered that coccidial

oocysts can be seen in the dung of clinically normal animals.

unrewarding. Drugs may be used prophylactically (preventatively), in the at risk period,

to prevent severe disease on farms with a known problem.

• Raise troughs off the ground and clean regularly

wall. It is a highly infectious, robust parasite which is resistant to many of the disinfectants

Scouring can last for a week or more and deaths can occur in severe cases. Where mixed

infections (e.g. with rotavirus) occur, mortalities can be high.

The parasite is transmitted via the faecal-oral route, with calves becoming infected from

calf pens, utensils or farm workers clothing which has been contaminated with dung

the local vet or laboratory, in the early stages of a disease outbreak

• Take dead calves to the Regional Veterinary Laboratory for post-mortem

• Isolate sick calves in a clean, warm and dry pen

• Continue to offer normal amounts of milk or milk replacer

• Raise feeding and water troughs off the floor by 0.75m

• Thoroughly clean and disinfect calving and calf pens with a disinfectant

before the new calving season.

Cryptosporidium parvum can infect humans. Farm workers should wash their

hands, change their clothes and footwear after handling sick calves. Children and

immunocompromised adults should not care for sick calves. Farm owners should

ensure a clean water supply for their families and the general public.

Calf rearing is labour intensive and occurs at the busiest time of the year. Over 60

individual pens to group pens. However, only 27% are practicing once a day (OAD)

feeding of calves and average turnout date of calves is April 10th. There is potential

Calf feeding system and labour requirement: A study was undertaken on 57

influenced by enterprise scale and facilities, together with an evaluation of specific calffeeding

time consumed per calf was highest in the small herd (

Organisation: Preparation in advance of calving will ease workload during calf rearing.

advance. Excessive calf and milk movement will result in inefficiency during this busy

period. Efficient farms have a maximum of two calf movements within yards, from

calving area to nursery area, and from nursery to calf rearing shed. The next move is to

grass. Redesigning calf sheds may be required to minimise excessive calf movement. In

discussion group analysis, 61% of farmers were manually moving milk from the dairy to

the calf house. There are labour saving options, which include pumping milk, motorised

Looking after yourself and others working on the farm: The next three months will

be an extremely busy time on dairy farms. Make sure to look after yourself and those

working on your farm during this busy time. Eat well – plenty of fruit and vegetables

– and drink plenty of water. Try to ensure that you get a good night’s sleep as rest is

important to ‘recharge the batteries’. Make time to keep in touch with other farmers

and friends. Taking time to do something different, even for a short time, can help to

re-energise you. Focus on the things which you can control and do something about

and try to accept that there are certain things that you cannot change. Where possible,

share the workload. Other family members may be able to help. Have you considered

getting some additional outside help during the busiest period? Caring for yourself is

the most important thing that you can do, but can often be overlooked. Above all, if you

find yourself becoming overwhelmed, talk to somebody else about your troubles. They

will help you to find a solution to your troubles. There are plenty of individuals who

can help. Finally, the risk of farm accidents increases at this time. Plan ahead to try to

reduce the chances of accidents occurring. 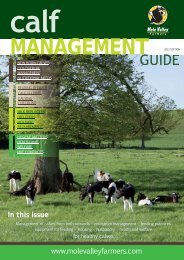 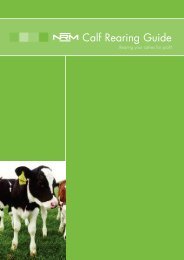 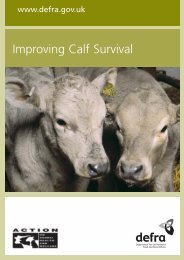 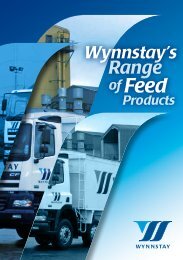 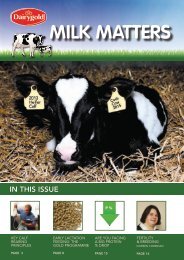 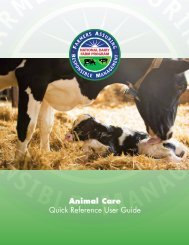 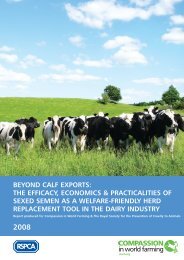 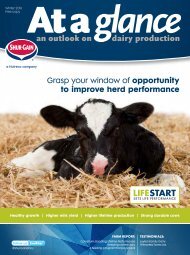