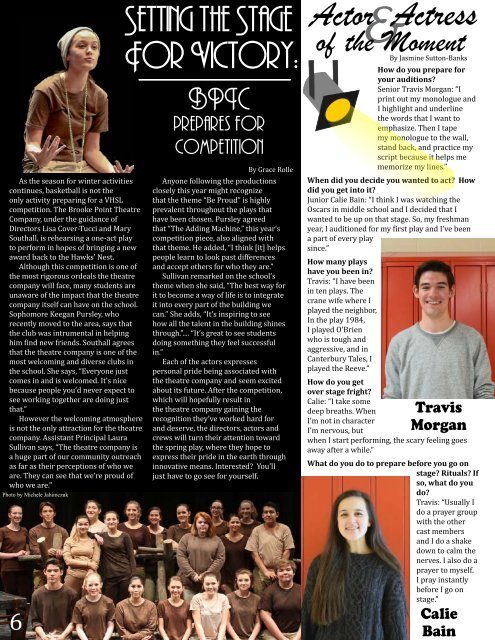 Welcome to the official news magazine for Brooke Point High School. This is the full, online, completely colored version of the second issue of the 2015-2016 publication. Within this issue, you will find articles about our students, the community, the winter weather, the upcoming Valentine's Day season, and much more!

As the season for winter activities

continues, basketball is not the

only activity preparing for a VHSL

Company, under the guidance of

Southall, is rehearsing a one-act play

to perform in hopes of bringing a new

award back to the Hawks’ Nest.

Although this competition is one of

the most rigorous ordeals the theatre

company will face, many students are

unaware of the impact that the theatre

company itself can have on the school.

recently moved to the area, says that

the club was intrumental in helping

that the theatre company is one of the

most welcoming and diverse clubs in

the school. She says, “Everyone just

comes in and is welcomed. It’s nice

because people you’d never expect to

see working together are doing just

However the welcoming atmosphere

is not the only attraction for the theatre

Sullivan says, “The theatre company is

a huge part of our community outreach

as far as their perceptions of who we

are. They can see that we’re proud of

Anyone following the productions

that the theme “Be Proud” is highly

prevalent throughout the plays that

have been chosen. Pursley agreed

that “The Adding Machine,” this year’s

that theme. He added, “I think [it] helps

people learn to look past differences

and accept others for who they are.”

Sullivan remarked on the school’s

theme when she said, “The best way for

it to become a way of life is to integrate

it into every part of the building we

can.” She adds, “It’s inspiring to see

how all the talent in the building shines

doing something they feel successful

Each of the actors expresses

personal pride being associated with

the theatre company and seem excited

about its future. After the competition,

which will hopefully result in

the theatre company gaining the

and deserve, the directors, actors and

crews will turn their attention toward

the spring play, where they hope to

express their pride in the earth through

just have to go see for yourself.

How do you prepare for

print out my monologue and

I highlight and underline

the words that I want to

emphasize. Then I tape

my monologue to the wall,

stand back, and practice my

script because it helps me

When did you decide you wanted to act? How

did you get into it?

Junior Calie Bain: “I think I was watching the

Oscars in middle school and I decided that I

wanted to be up on that stage. So, my freshman

year, I auditioned for my first play and I’ve been

a part of every play

have you been in?

Travis: “I have been

in ten plays. The

crane wife where I

who is tough and

How do you get

Calie: “I take some

I’m not in character

when I start performing, the scary feeling goes

away after a while.”

What do you do to prepare before you go on

so, what do you

do a prayer group

and I do a shake

down to calm the

nerves. I also do a

before I go on

Burning Up the Dance Floor

The Brooke Point Dance Team has made

its mark throughout the years and once more

they plan on making our school proud. The

school dance team is best known for its fun

and energetic dances. From hip hop to jazz,

the dance team makes the crowd get involved

in Brooke Point spirit. This year the dancers

are mostly looking foward to Nationals.

excited to compete because we have a really

Through dance, the team has grown

closer as a family. Many girls on the team are

from their fellow dancers. Some girls have been

dancing since they were younger, which is one

of the reasons they joined the team.

Every team has its struggles and the

Santana said, “The practices are kind of

hard, but it’s worth it in the end. Like during

Nationals, it shows how hard we work.” To

other dancers, the trouble is time management

between school and home.

A closer look at BP Dance

Through the long practices and the tough

girls are like kids to me. I love them, I see them

all the time. They drive me crazy, but we work

together and accomplish things.”

team has taught me perseverance definitely

because I know that sometimes during practice

I feel like leaving but you can’t do that. You have

their years of dancing with the team. Junior

leadership, patience, and just overall how to

work with other people.” while Senior Natalie

Malstrom said she learned “how to work in

teams, handling pressure.” In a sport known for

individuals, dance has brought a group of girls,

who are very different dancers, together. In the

end, Brooke Point is proud of our dance team

and the hard work they do to entertain our

good luck at Nationals this year! 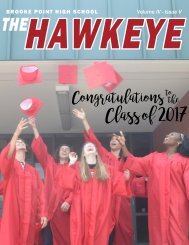 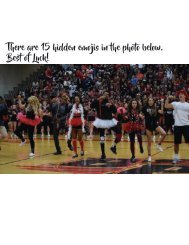 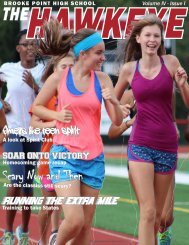 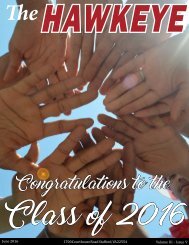 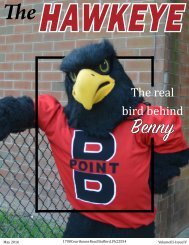