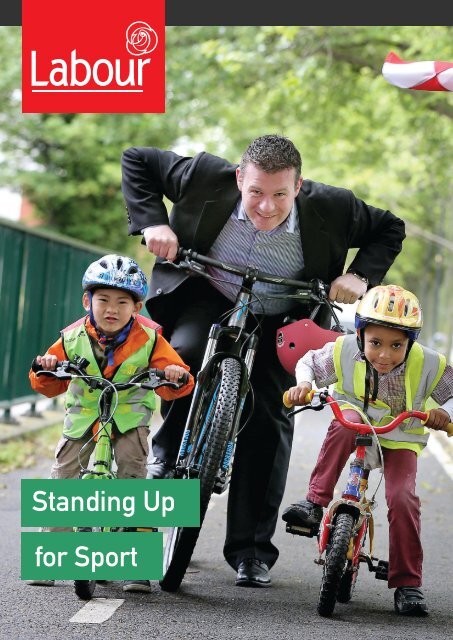 using provision to meet the needs of families and individuals across all sectors – owner-occupier, private rental, social and affordable housing.

• Invest an additional €25m in supporting Irish sport over the next five years.

clubs and schools or youth organisations

Sport has hugely positive benefits for individuals and for society as a whole. Labour understands

the value of sports to strong communities, and the vital role of State funding in delivering

the local facilities needed in every part of the country. We are also passionately committed to

supporting excellence in sport, both on the national stage and abroad. We will continue to invest

weight around the world.

Labour in Government has funded

administrations. This has provided over €110

million in funding for thousands of local clubs

across the country: vital funding that has kept

made the capital programme more accessible

to clubs and organisations, including those

without a clubhouse or land.

Community Sporting clubs have had vital

funds freed up through the partial rates

exemption under the Valuation Act. We

introduced this measure in 2015 so that more

sports funding could be directed towards the

and other vital expenses.

Our plan for the next five years is to continue

to increase both the level of sports funding

and the degree of participation in sport and

physical activities across the population.

We want to up investment in community

sporting organisations through the Sports

Capital Programme. To strengthen the

link between young people and sporting

opportunity, we will ensure a dedicated stream

for joint applications made between sports

clubs or youth organisations and schools.This

will see funding prioritised in cases where

facilities that are used by schools during

the day remain at the centre of community

We have improved the administration of sport

nationally though the establishment of Sport

Ireland. The last five years of Government have

most recently available data. If re-elected to

Government, Labour is committed to building

We want to continue building a more

inclusive sporting culture that reaches as

Standing Up for Sport 3

many people as possible. We will continue to

invest in Special Olympics Ireland as a priority

throughout the next term of Government. We

will also aim to deliver a meaningful increase

in the participation of women and girls in

We will legislate to require colleges to give

and men, in order to increase the number of

women in receipt of sporting and scientific

Labour will also prioritise the rollout of

encourage a greater number of people to take

up some form of physical activity. This will

have serious advantages both to individual

health and the strength of our communities.

Supporting our Sportspeople on

Irish sportsmen and women have always

proven themselves able to excel in the global

even more examples of how Irish people can

compete and succeed at the very highest levels

in sports as varied as football, hockey, rugby,

These successes are examples of phenomenal

team and individual skill and it is essential we

continue to fund the efforts and training of our

top sportspeople and those that will excel in

our future. Labour is determined to fund the

athletics, training and gymnastics within the

Arena are already set to be completed in 2016.

The next Government must also commit

to keep up funding to help Irish sporting

organisations in their ongoing preparations for

excellence to inspire a new generation of top

Ireland has already succeeded in attracting

major international sporting events to the

country. Recently this has included the Giro

d’Italia, the British Open and the Women’s

We will continue to support other bids,

including the 2023 Men’s Rugby World Cup,

which will bring significant numbers of visitors

to our shores and boost our global standing as

Labour’s plan is to improve the process by

which the country bids for international events

through the establishment of a specific sports

bidding across all sporting organisations and

will work in partnership with Fáilte Ireland and

We also recognise the need to keep growing

the increasingly important role played by

sports tourism in our local economies. We now

see visitors from at home and abroad travelling

to take part in activities as diverse as surfing,

triathlons, and walking holidays in so many

different parts of the country.

If returned to Government, Labour’s plan is to

If returned to Government,

Labour’s plan is to put a comprehensive

sports tourism strategy at the heart

Magazine: Standing Up for Sport