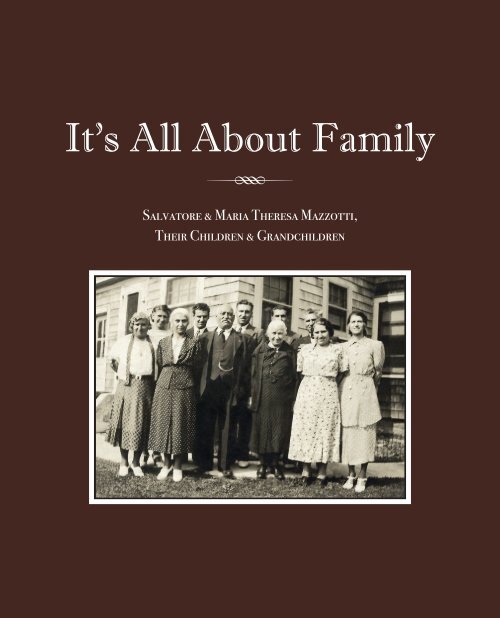 It's All About Family Final for Yumpu

It’s All About Family

It’s All About Family

for my son, Andrew

memory of my parents

My son Andrew, me and my husband Michael Kelly

I have created this book for my son, Andrew Graff Kelly. I wanted to capture the life and

legacy of my grandparents, parents, brother, aunts, uncles and cousins. I wanted Andrew to

experience his great-grandparents’ immigration to America, the impact of World War II, the joy

of growing up in Patchogue and the music, food and love that filled our homes and defined our

lives. I wanted him to know his roots and carry them with him forever.

This book, which covers the first half of the 20th Century, is a collection of personal recollections,

photos and artifacts, along with articles that appeared in the Patchogue Advance

during the period 1927 to 1959. Taken as a whole, these materials tell the story of our family:

Salvatore and Maria Theresa Mazzotti, their nine children and twenty-six grandchildren (of

whom I am the youngest).

As you read the articles, study the photos and enjoy the reminiscences, you will see how the

this solid foundation on which our lives are built.

I have done my best to include every cousin, but was limited by the resources available to me.

I also have one note of caution as you page through this book: it is very possible that dates may

be inaccurate, individuals in photos misidentified or recollections not quite right. If that has

occurred, we must consider that years have passed and memories have faded. But, in all cases the

recollections. A special thanks to these very special resources:

Deanna Salamone Ayers not only added her wonderful memories and photos

from Aunt Peggy’s collection, but also was my cheerleader throughout this

process. We found it great fun to pore over family photos and share our favorite

are central to the family’s story in Chapter 1. Without Rita’s work, much

of our family’s rich history would have been lost to many of us. Rita also generously

added her memories of her grandmother Rose and grandfather Frank.

information. I called her often as we tried to remember names, dates and

places. We had many laughs as I tested her memory on a number of details.

I am thankful that her memory is much better than mine.

that filled out many of the chapters. I had not been in touch with Joe for many,

many years and was delighted to reconnect with him.

they had on his life. He is the only family member with whom I shared pages

of the book while it was in progress.

project by my husband, Michael Kelly. Mike helped me select photos, type copy and navigate the

technology needed to move the pieces around. I love him for his collaboration on this book and

for making all my dreams come true.

This undertaking has been for me a truly life-affirming endeavor. I have loved looking at

each picture, reading each article and appreciating each recollection. As we live our busy and full

lives, taking a moment to remember from where we came is truly a treasured opportunity.

After all, it’s all about family.

In 1896, Grandma and Grandpa Mazzotti

arrived in America with their two young

from a village in Calabria, Italy, called Terra

Nova di Sibari. They decided to travel to the

United States at the request of Grandma’s

as the caretaker on the Roe farm in

After they settled in America, their first

Grandma and Grandpa stayed on the Roe

farm for about five years and then returned to

Italy with their children for reasons that are

not known. During the voyage back to Italy,

Grandma was pregnant with a fourth daughter,

Margaret (Peggy). Not long after their

in the United States was better for their family,

so after sixteen months, he returned to the

Roe farm by himself. He left the rest of the

family in Terra Nova until he could get established

and send for them. Grandma and their

children rejoined Grandpa in about 1905.

Grandma and Grandpa and their children

on the Roe farm. They did not have electric

lights, only kerosene lamps; and one of the

children’s jobs was to keep the lamps cleaned

and filled. Their main forms of transportation

were by bicycle or horse and carriage. Aunt

Rose would deliver milk throughout the area

with Grandpa in a horse and carriage. A coal

stove provided heat in the house and the coal

was stored outside the kitchen door in a bin.

At Christmas, the tree was decorated with

hoped that the “ornaments” would fall

off so they could eat them. Christmas gifts

were practical rather than frivolous and fun.

The children usually received clothing rather

farm to pursue other endeavors. He opened

a number of stores in Patchogue on the four

to 48 Railroad Avenue, and, when they

later moved into a larger home at 68 Jayne

Avenue, he offered the Railroad Avenue

house to Grandma and Grandpa in exchange

for assuming the mortgage on the property.

When Grandma and Grandpa moved from the

Roe farm to the house on Railroad Avenue,

Grandma and Grandpa then completed

their large family with the birth of three more

in 1915. Their youngest daughter, Millie, was

These reminiscences were provided by Rose Romeo,

as told to her granddaughter, Rita Crocitto King,

and by Jean Fuccillo Aragona Korosh.

A Joyful Legacy of Food

“Cream puffs were a tradition in my family. My mother’s mother, Jeanette

Damizi, lived with us and was a great baker. In addition to cream puffs, her

pies and cookies also were ever-present in our house. When my grandmother

died in 1967, my mom picked up the baking mantle. I am fortunate to have

all of my mother’s recipes, many in her handwriting. My mother’s cream puffs

were amazingly popular. All of her recipes were informal... as is this one.”

water in a small saucepan.

Take the pan off the burner.

Drop small balls onto an

Fill with whipped cream or other

My Mother, Grandmother Jeanette Damizi and me

Aunt Lena and Uncle Nick and their wedding attendants 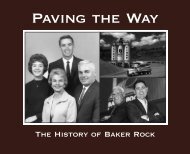 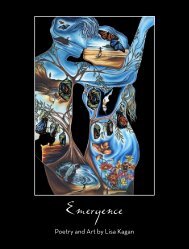 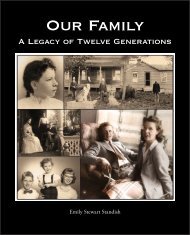 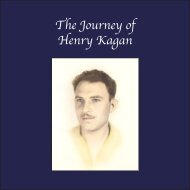 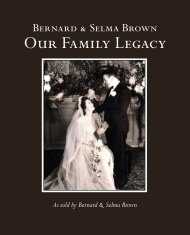 Magazine: It's All About Family Final for Yumpu