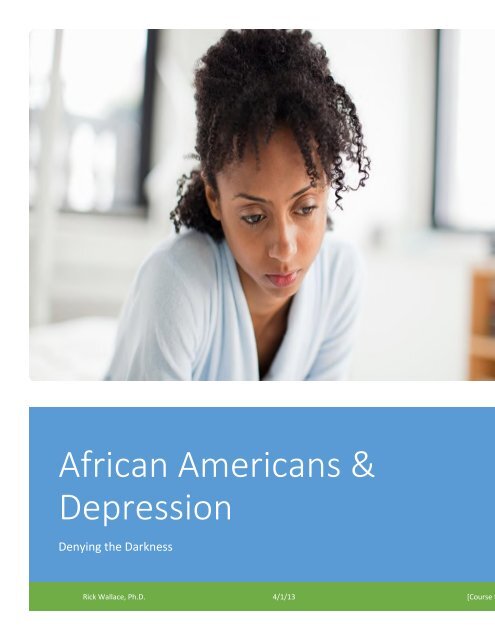 One of the primary symptoms associated with the trauma of incest and child molestation is depression, and much in the same way that blacks go to great lengths to pretend that incest is not an issue of relevance among us, we emphatically deny the impact that depression, as a mental disorder, is having on us as a collective.

One of the primary symptoms associated with the trauma of incest and child molestation is depression, and much in the same way that blacks go to great lengths to pretend that incest is not an issue of relevance among us, we emphatically deny the impact that depression, as a mental disorder, is having on us as a collective.

Several days ago I published a paper entitled, “Molestation, Incest and Rape in African

American Families,” I spoke of this devastating plague in the African American community as

the elephant in the room — a plague that is wreaking havoc at astronomical levels. Well, one of

the enigmatic issues that serve to subdue our efforts of universal elevation are multitudinous.

depression, and much in the same way that blacks go to great lengths to pretend that incest is not

an issue of relevance among us, we emphatically deny the impact that depression, as a mental

disorder, is having on us as a collective.

The Stigma of Depression Among African Americans

with it and other mental disorders, such as bi-polar disorder (formerly known as manic

depressive disorder) (Staff E. , 2016). Blacks seem to have an almost inherent belief that

weakness or faithlessness (Staff M. , 2016). While much of the psychotherapeutic community

has attempted to create an inclusive treatment environment, their efforts can only be viewed as a

failure as far as people of color are concerned. It is estimated that only one-third of African

A Marked Increase in Suicide Among Black Youth

African Americans that no one wants to talk about. To exacerbate the matter, the rate of suicide

American girls has been an issue for some time, there has been a significant increase in the

silence, based on the belief that no one will understand.

a problem, the suicide rate among African American youth has more than doubled over the last

20 years — surpassing the rates among white children, which actually dropped during this same

While suicide among Black teens is always a concern, simply based on the stresses and

challenges associated with the transition from childhood to adulthood, what is frightening is the

rapid rise in the suicide rate among black children between the ages of 5-11. When it comes to

the suicide rate of this age group, the overall rate remained steady, but the rate of suicide among

The problem with the rise in suicide rates is that, outside of the world of science, there is not true

effort to understand the etiology that is fueling this increase. It has long been the common

generation before them possessed. Children who suffer from depression are considered weak,

and often they are mistreated and abused in attempts to “toughen” them up. Attempting to

toughen up a victim of depression can be met with dire consequences.

Not only have I counseled parents who have lost children to suicide, but I personally have

several close friends who have lost a child to suicide.

We are in Denial

point, depression and suicide among blacks, in general, has become an increasing problem (Staff

demand for justice. While being 100 percent in favor of seeking justice for Sandra, the researcher

in me, could not help but study the response of the black community to the official cause of

death being listed as suicide. The view of the vast majority of African Americans who voiced

their opinions insisted that it was not even possible for Sandra took her own life, even after the

asphyxiation, as a result of suicide.

psychology, depression nor suicidal ideation, but on a primary belief that black people who

appear happy or even defiant could not possibly be suicidal. In all fairness, these postulations

were also driven by an additional force, the distrust for law enforcement. It was just easier to

believe that she was murdered than to face the possibility that she may have taken her own life.

Am I suggesting that Sandra Bland took her life? Not with certainty. There are simply too many

variables that cannot be effectively examined at a distance, and my distrust of law enforcement

carries immense gravity. However, here is what I can share. I did not rely solely on the reports of

social media. I decided to conduct my own forensic psychological examination with the

information that was being made public record. I will first admit that consideration has to be

to them, so the information that I had access to had to be examined under the scrutiny of

suspicion. One of the most telling pieces of evidence was a recording of Sandra’s last phone call,

which went out to a friend that she was trying to reach. She ended up leaving a voicemail, and

the tone in this voicemail spoke volumes.

was wheeled out of her cell. Her body language on videos, and her voice on phone calls, reveal a

decline state of mind — she had gone from defiant to despondent. I also visited her page and

went through it fastidiously. What I can say with a certain level of certainty is that she suffered

from depression, and that much of that suffering took place in silence and loneliness. That

loneliness was intensified during her stay in jail, as friend after friend failed to come through for

What I can also say is that the jail, and its personnel, still carry some level of culpability in her

death, simply because she admitted that she not only suffered from depression, but she also

admitted that she had attempted suicide in the past. She should have been placed on a suicide

watch, which should not have been that difficult, considering the size of that jail. At the very

least, anything that she could have harmed herself with should have been removed from her cell.

Why am I speaking about such a sensitive topic as the death of Sandra Bland? It is because the

mechanisms of the disease. Instead of dismissing the rise in suicides among blacks as a form of

weakness, we must learn to ask why. Everything has a cause, and ignoring or dismissing the act

does not extirpate the consequence.

We must take the time to understand and confront depression, if we expect to successfully

overcome it. We cannot ignore or dismiss this condition into obscurity, we are going to have to

confront it, or we will continue to see a rise in the rate of suicide. While suicide has been a

topical focus thus far, it is worth noting that not all bouts with depression will produce suicidal

ideations; however, the numbers do reveal that suicidal ideation is prevalent among certain

Understanding the Basic Function of Depression

Despite common belief, clinical depression is more than the result of the weight of life’s ups and

downs. Everyone experiences being mentally depressed at some point in life, after all, life is

replete with moments of happiness, sadness, loss, accomplishment and more, and it is reasonable

realities. However, clinical depression is more emphatic in its impact and duration. It can

manifest itself as chronic or recurring, and it can be absolutely unforgiving.

Clinical depression should not be viewed as a personal weakness, gracelessness or faithlessness.

It is actually a common and very serious medical condition. Clinical depression is a condition

that impacts the entire being of a person, including mood, body, thoughts and behavior. Without

seeking the appropriate treatment, the symptoms can last for weeks, months or even years.

Fortunately, most cases of depression, even severe cases, can be successfully treated.

Unfortunately, the myths associated with depression place a stigma on the condition that creates

help they need to improve. The following statements reflect just some of the misconceptions

associated with depression. “Why are you depressed, just get over it?” “If our people can survive

slavery, we can make it through anything.” When a black woman suffers with depression, she is

considered to be weak, and weakness is something that is not tolerated in black women.” “You

should take your troubles to Jesus, not some stranger (or the ever famous “Jesus will fix it”).”

The last statement is not to insult the faith of some, but it is to highlight the need for blacks to see

the severity of this condition and treat it accordingly. No one would look at a person who is

apparently experiencing a heart attack or suffering from severe head trauma and say, “give it to

Jesus.” These people would be immediately rushed to a trauma center for treatment. This is the

same approach that must be taken with depression.

Recognizing the Signs and Symptoms of Depression

depression will exhibit their symptoms. One of the most common things I hear from the family

and friends of victims of suicide who my counsel, is that they had no idea, they did not notice

any signs or symptoms of depression or suicidal ideation. Following are a number of signs and

symptoms that are associated with depression that you should be aware of.

Reduced appetite and unexplained weight loss, or conversely, an inexplicable increase in

A mood of sadness, anxiety or emptiness that is persistent

Physical symptoms that are persistent and don’t respond to treatment, including

A decrease in energy levels, fatigue or feeling bogged down

Either, sleeping too much or too little, early morning waking or difficulty falling to sleep

Difficulty in concentrating or remained focused on tasks and responsibilities

Loss of interest of pleasure in activities once considered a passion

One of the most common responses to clinical depression is psychopharmacological

intervention; however, I personally prefer to use drug intervention as an emergency or final

resort. The option I prefer to use is some form of psychotherapy that identifies core issues, while

providing coping mechanisms that will allow the individual to handle negative situations better.

Therapy can definitely be a viable and efficacious option, especially with less severe cases. I am

also currently working on a diet that will help raise serotonin and dopamine levels, which can be

What is important here is to understand that depression is real, and pretending that it does not

exist, or that those who openly suffer with it are weak or faithless, is not the way to successfully

confront this growing epidemic. We must treat it as we treat any other potentially life threatening

condition. We must be proactive in engaging it. We must educate our communities in order to

remove the stigma that is currently associated with this condition. Most of all, we cannot allow

our loved ones to suffer in silence.

1. The Mis-education of Black Youth in America 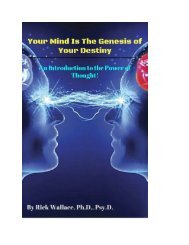 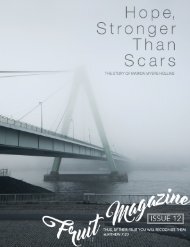 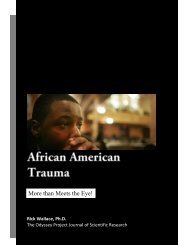 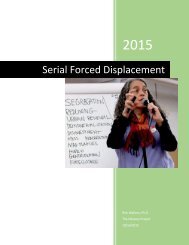 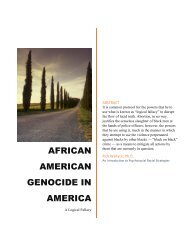 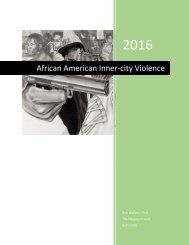 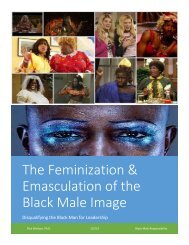 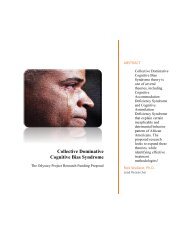 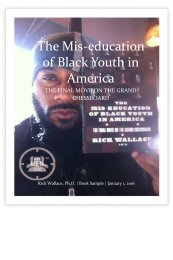 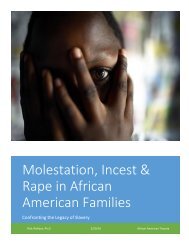 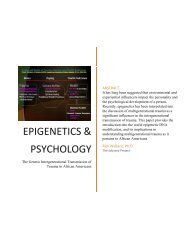 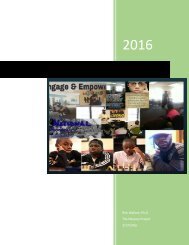 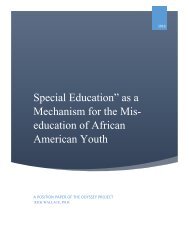 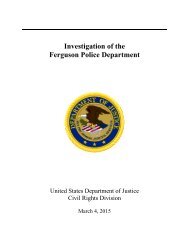