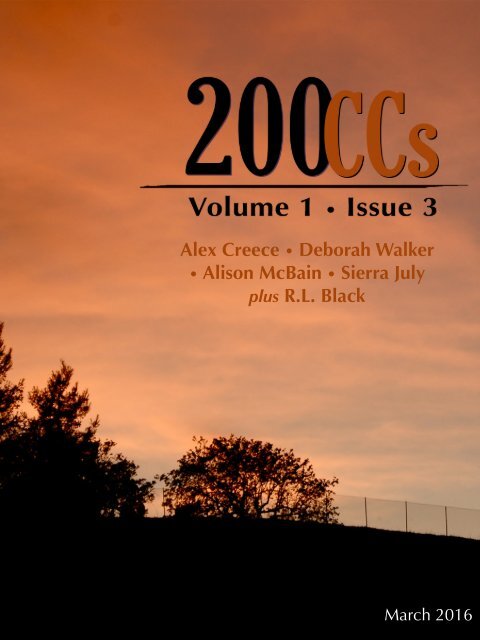 Copyright © 2016 ironSoap.com. All writing and photography is the property of their respective

Cover photographs by Paul A. Hamilton.

200 CCs is an anthology of microfiction, collected monthly. Inquire online for submission guidelines.

Images accompanying each story are provided via the Creative Commons license as follows:

To help show your support for 200 CCs, visit http://ironsoap.com/200-ccs/support/

his literary magazine, The Alarmist, going under

after five issues. You can read it in full on

medium.com and know going in that it’s vitriolic

and divisive and funny and smart and revealing in

the way the best editorials are.

There are a lot of things in Mansour’s crosshairs.

The wonky distribution system for magazines

under sale or return models. The distaste of adbased

revenue and the sad fact of advertiser

apathy toward fiction periodicals. The crush of

social-media publicity and the currency of

expectation. The disproportionate enthusiasm for

writer compensation versus the lack of appetite

for reading short fiction and poetry among the

And it’s really this last bit that I think bothers

Mansour the most, perhaps the same fact that

than we maybe care to admit. Truth is, the

market for literature is tiny. Tiny and

on the supply and demand scale. Most writers

aspire to novelist status rather than poet or

short fiction author because while the above

diagnoses still apply to books, there is at least

a reasonable aspiration to succeed (in a

reasonably be said for those of us trafficking

in stories or poems under 30 pages.

Which is peculiar in a way because if the Web

has demonstrated anything it’s that there is

not a lack of demand or appetite for written

enthusaism in the weird and text-centric

world of the internet. And often in these

than those falling under the “too long;

didn’t read” banner. (And really, what could be

more universally TL;DR-worthy than the modern

But if age has taught me anything it is that you

cannot hate the world for not conforming to your

notion of what would make it better. Worlds that

fit perfectly into an individual’s view are utopias

for one. Sometimes those are called tyrannies. So

I’d love if it were recognized that short fiction is

a great way to use down moments. Far better

than the latest clickbait collection of animated

GIFs. But I can’t muster up enough angst to rage

against that particular machine.

In part, it’s because I’m guilty of it, too. Novels

difference between mail ordering a bar of gold

and panning a river. I read a lot of short

fiction but some days even for me the

And so, if I may humbly submit, the

weightless freedom of microfiction. If

digestible enough to appeal to the masses,

demand. Is there an untapped appetite for

creative, crafted narratives, boiled down to

a rich indulgence? It remains to be seen.

Still, it certainly feels like the effort is one

worth making. And not just because 200

CCs is already making it. In part it’s

because, grumbling from disenfranchised

editors notwithstanding, literature and

fiction still matter to those of us who peddle

it. To those who sweat and weep over

creating it. To those who desire, devour,

and delight in reading it.

The rest is that it whiffs of a barely-kept

particles of dust make the unseen visible. The Chinese have always known that spirits fill the air.

The crew of the Silver Nightingale laugh at the tortuous routes Westerners take to avoid the Rift.

They’re surprised, but they’re relieved when quiet Sung Li, the newest recruit, volunteers to pilot the

She watches the crew as they climb silently into the

the feel of ghosts lingering on their

skins. They will make

Sung Li dresses in the

captain’s uniform. She has travelled

far from the factory slums of Neo Shanghai.

She has risen like a leaping salmon from the swarms of

her contemporaries. Sung Li has travelled a thousand light years from her childhood, and from her

Sung Li watches the approaching Rift through the metal-glass window. She smoothes down the

captain’s uniform, and she smiles. Sung Li has travelled far. She is looking forward to meeting the

familiar look of her mother’s disapproval.

Deborah Walker grew up in the most English town in the country, but she soon high-tailed it down to London, where

she now lives with her partner, Chris, and her two young children. Find Deborah in the British Museum trawling the

past for future inspiration. Her stories have appeared in Fantastic Stories of the Imagination, Nature’s Futures, Lady

Churchill’s Rosebud Wristlet and The Year’s Best SF 18 and have been translated into over a dozen languages.

Mason pricked his finger on a rose and fell onto his back, panting. He was certain he’d enter into a

coma like Sleeping Beauty. When sleep didn’t come, he studied his finger. Instead of a

red blood pearl at its tip, there was a blue substance.

Without thinking, he licked it. Blackness fell.

It was Chloro who went in to dinner, sat with Mason’s

Mason’s parents had never seen their son so

“What were you up to before dinner?” his mother

asked. “I saw you playing in the garden.”

“I wasn’t up to anything. As soon as I arrived, I

came inside to learn about humans. I’ve only

seen your species from a distance.”

Mason’s father laughed. “Still in the middle of a

game, huh? Sounds like you’re set for an Earth

Chloro nodded and went on talking.

The parents laughed as he described dinosaurs and other extinct animals he’d seen since his birth.

Detailed how he lived on soil, sun, and water. How he’d waited for a chance meeting with an

organism with legs. The parents laughed on, not suspecting a thing.

Sierra July is a University of Florida graduate, writer, and poet. Her fiction has appeared in Robot and Raygun, T.

Gene Davis’s Speculative Blog, and SpeckLit, among other places, and is forthcoming in Belladonna Publishing’s

I saw her hair first, the same color as the wind-blown clouds. She was

wearing only a thin shift, and her skin glittered with a thousand liquid

stars, as if she had just bathed in the lake behind her.

She smiled over her shoulder at me, but before I could accept her

invitation, I noticed something that sent a sudden chill up my

back. Her fingers dipped below the surface of the water, but

they caused no ripples in the lake.

I’d never seen a kelpie before, but the villagers had piqued

my curiosity with a warning about unexplained drownings

—I’d not believed them until now.

Glancing one last time at the most beautiful woman I

had ever seen, I forced myself to turn away, my heart

singing in agony. Her banshee shriek followed me all

the way home and echoed through the many seasons

Decades later, I still dream of her at night, even

though I have never returned to the lake. I dream of

her with regret, although it is not my only one.

Twice, she broke my heart.

I was born knowing the ways of the world, with a heart that

I had a son, once. But… his heart was young.

Alison McBain lives in Connecticut with her husband and three daughters. She has over thirty

publications, including stories and poems in Flash Fiction Online, Abyss & Apex, and the

anthology Frozen Fairy Tales. You can read her blog at alisonmcbain.com or chat with her on

Blueish, purpleish, and then grey. Stigmata once

throbbing raw with rot blackened to an

impenetrable void. His palms were a purgatory of

coagulate crust. The eyes of the all-seer shrivelled

upon the salvationless silhouette of the boulder

which obstructed his portal to the next life.

He stared at the boulder for hours on end,

blinking less and less until he no longer felt the

need to scrape his sleep-starved lids against eyes

so dry and devoid of sight. Rocks and rubble

etched secrets and scripture into his back, and

eventually he was comfortable enough to settle

own rapture, perhaps—so he no longer felt the searing

necrosis of his physical form, nor did he choke on the

stench of his own decay. He welcomed rigor mortis

eagerly, allowing it to exorcise him of a life left.

A couple of days later, a crack of light seeped through

the edge of the boulder. It caught his

But he remained staunch. He had found

his way through days ago.

Alex Creece [facebook.com] is made of dirt and determination. It’s the latter which laces her

There is nothing permanent except change.

Change is in the air. The Easter Holiday has

just passed, and in the same spirit,

what once was dead is now very much

alive. Here in the states, we’ve

weathered the winter, a kind of death,

and spring has arrived. Trees are

budding, flowers popping up out of the

story to tell us, if we listen closely

enough. It’s a story of rebirth, of

regeneration, of renewal, and the moral

of the story seems to be that life goes on

— and that change is good.

Why? Because we’re afraid of the

waiting for us on the other side of that

change, and it torments us. We become

taking “torturous routes … to avoid the

Rift.” We dodge those rifts, those cracks

in the world as we know it. We are

our feet on solid ground. We like to know

In Blue Roses, the parents are so focused on

the normal, everyday world that they don’t

see the out-of-this-world sitting right in

front of them. They totally missed it. They

refuse to even acknowledge that something

has changed. The boy didn’t miss it. He saw

something he’d never seen before, and he

wonder if the parents had missed other

things, too. If they didn’t notice this huge

shift right in front of them, had they been

missing their son and all the tiny, daily

differences, too? Were they refusing to see?

Afraid of what those changes would mean

In Regrets, we see two different ways of

approaching change. The son had a “young

heart.” He saw the magic, and he gave

himself to it. The father, on the

other hand, let fear hold him back,

and in the end, he’s left with only

anguish, more haunting than any

drowned, but wasn’t the father

drowning in sorrow and regret the

How do you feel about change? When

those rifts come your way, how do you

react? Do you find yourself resisting?

I wonder … if we were able somehow

to let our guards down and trust a little

magical ourselves? Probably not an

alien invader or a kelpie, but

something … perhaps even something

The greatest change of all is faced in

Death is the proverbial elephant in the

room. Always hanging over our heads.

The end of our physical lives is ultimately

what we fear the most, isn’t it? Because,

out. We can have faith and believe that

something wonderful is on the other side,

but we won’t actually know until we get

there. And that’s what makes change so

But if we can face those cracks that come

our way, even when we’re scared, if we can

go there bravely like Sung Li in Ghost Rift,

I think we’d find our own way through, and

side, something not so unfamiliar after all.

For weekly updates and more, visit: 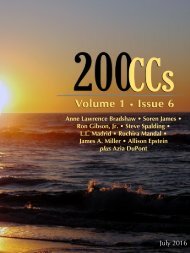 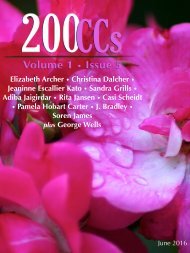 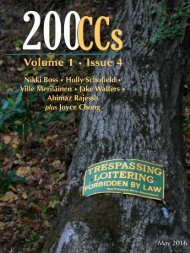 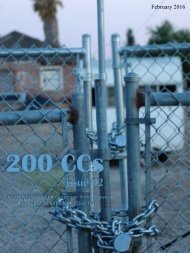 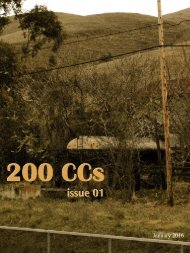