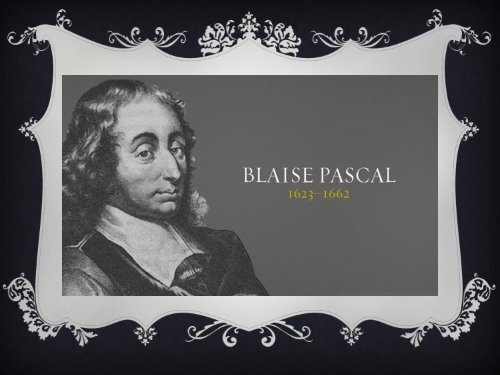 Pascal was a French mathematician, physicist and religious philosopher. He was born

in Clermont-Ferrand, France in 1623, June 19 th . Generally, there are two different

requirements to be a famous scientist. To be born in the really rich family that could

concentrate on studying or had critical family problems such as poverty or bastard.

And Pascal was the latter one. His mother died when he just a toddler. May be due to

this, he also has really poor health, which mean he had to stay inside. So, his father,

Etienne, who was a tax collector and very talented mathematician, thought him at

home, not school. Most things that he thought to his son is languages, and that

influence Pascal, so his is not just a mathematician, but also the philosopher. However,

his father, Etienne don’t teach the math, but teach about languages, Greek and Latin.

This, forbid the math, provoked his interesting about math tremendously. Fortunately,

he was really talented at mathematics also, and he prove his talent to his father by

He had two sisters, and absence of his mother makes him depend up on his sisters.

After he started studding about Math, especially Geometry, his father, Etienne support him in many ways. As an example, he

accompany him to meetings at Mersenne's Academy in Paris. By the Academy, he could have some exchanges with peer

mathematicians, and that accelerate the study of Pascal a lot. One instance of his achievements, Mystic Hexagram and Essai pour

les Coniques (1640) are the most earliest achievements that Pascal made before he moved his home to Rouen. At 1640, Because of

political turmoil, Etienne have to move toward Rouen, for a taw gatherer. It didn’t impact pascal really, so he kept study about the

math and physics, which he had an interest and started studying for few years ago. Teacher who thought him is Académie libre, they

are just the group of scientist and philosophers. Pascal introduced to them by his father. In that group, he studied philosophical

thinking and math, physics and other academic subjects that pascal needed help.

For the other example of his achievements, he made the first calculator, which named as “pascal line”. He invented this

machine for his father’s working. Since Etienne was a tax gatherer, he needed many calculation for his work. And Pascal felt

interesting about it, and developed that idea to machine help calculation. Pascal’s triangle, which is well known is also invented

during this time period .

The big conversions was happen in his life at 1646, one icy day. His father, Etienne went out for his official

problems and work. He slept on the ice of the road, and heart his leg and pelvis a lot. Pascal's family, specially his

younger sister Jacqueline worried, and they call the doctors(bonesetter). He, the bonesetter was Jansenist brother,

and he was really faith full believer. Because of them, Pascal impressed about their doctrine, because they had

same ideas with him. He surely accept the Jansenist doctrine and spread it to his family. However, this made him

bit faithful, but he still thinking about the science and the math more then faith or religious things. During this

time period, he researched about vacuum, pressure and fluid. Also, he had some exchanges with Pierre de Fermat

about dice and probability.

In the summer of 1647, Pascal fell ill due to being overworked. He and Jacqueline moved back to Paris. He

kept walking on the pressure and vacuum with Evangelista Torricelli, who introduce to pascal by his friends. At

1651, he published the result of the experiment, “Treatise on the vacuum”.

honnêteté is the term refer to an entire code of conduct and the gallant, cheerful lifestyle of an independent-minded

man of the world. This was the name of the group in France at that time, and Pascal impressed by their thinking a lot

such as who seek a life of virtue and happiness apart from God.

Jacqueline became a nun of Port-Royal abbey. It didn’t influenced pascal much since he was a Jansenist, and their view

about death is quite simple. According to the written latter by Pascal, he wrote “we should not grieve but rejoice at

God’s will; the deceased is now in a better world; and so forth.”

In October of 1654, he experienced the death by fatal accident occurred on the “Pont de Neuilly » of the Pari.

That accident was really critical for his health, since he had poor health and don’t care his body much at that time. That

accident led Pascal to the death. However, by this accident, he changed his sight about the world: more faithful and

sincere. According to the bibliography of pascal which written by Krailsheimer, at November 23, 1654, Pascal

experienced very sacred moments which change his sight completely. He recorded those experience on the parchment,

and kept bring it with him always until he dead. In the parchment, he wrote the solemn pledge such as “Total

submission to Jesus Christ and to my director. Eternally in joy for a day’s trial on earth. I shall not forget thy word” .

After he experienced that sacred hallucination, he made his interest towards the religious and philosophical

works. He fascinated to express his religious view point – Jansenist to the words. For example of it, he wrote

pseudonymous letter which called as a Les Provinciales to depend the Jansenist doctrine, on 1656-57. More

specifically, his letter was completely new style and tone for the contemporary writers. It suggest the new paradigm

to the biography of Pascal.

One other biggest achievements he did after “The Night Fire” is study about possibility and the book,

“Pensées” This book started 1658, near by the death of Pascal. He was really ill, since he had big fatal accident at

1654. According to Biography.com, when he died, his body was already really damaged, specifically had wound

inside his organs, which was impossible to find it by the equipment of that time period. However, he strived to

Pensées on his last part of life. The book is about logical expressions about the faith and the god, specially religious

view point analyzed by scientific methods such as “wager of Pascla”

Pascal’s contribution to Scientific revolution is really a

lot. In his short life, he spends most of his time to studying

math and sciences, which contributed to Scientific

Revolution a lot. However, he has so many achievements

regard the mathematics and science, so I wrote just part of

Mystic hexagram: This is the title of the study about

geometry, which subject that he had an interest in his life at

first. However, this study is about the hexagram inside the

conic section. If we draw the lines from the each sides of

the hexagram, then point that they will meet are all in the

same line. This was really important discovery that open the

new way of geometry, which called as a projective geometry.

Hydrostatics: He re-established the

things that discovered by Evangelista

Torricelli, who is the Italian scientist of

tube and the mercury. He pulled the long

cylinder with the mercury, and put that

cylinder inside the beaker, also filled with

mercury. Then, the space is produce at end

of the turned cylinder.

useful technology when we calculate

an equation of higher degree. This triangle found by pascal when

he was just 13. This triangle has many characteristics, and that

just the one of them.

About the possibility, pascal has a friends name de Mere (real

name: Antoine Gombaud ). One day, he aske a question about

possibility. He was a gambler, and he had some games with

winner get the 64 coins. But, they just finish their game when de

mere win 2 times and opposite win 1times. Then, how many

coins de mere can get? From this question, pascal and

the studying about possibility.

On the other hand, Pascal had just few kinds of achievements related with

humanisms or enlightenments of that time period. There are two reasons, one is his

age, and other one is his faith. He died when he was just a 39 years old. Sadly, that is

not enough time to express his every idea. Also, because of few accidents, he has

deep faith really traumatically. However, here are two piece of works of Pascal.

This book was written by Pascal, at the last part of his life. Just few

years before he died, he was really fascinated about Religious activity,

specially about the Jansenists, which denomination of Pascal believed.

critics from opposite denominations. The meaning of Pensees is

meditation or deep thinking. This book has really special characteristic.

Even though Pascal was really fascinated about religious, this book is

very logically organized and explain about why we have to believe god.

For a evidence of it, “Wager” of the Pascal is included in this book.

This show us the specialty of Pascal’s thinking. Unlike peer thinkers,

he was really faithful. During the age of reason, he overturn the idea of

enlightenment and rather use logic to explain the god, which is the

symbol of ungrounded thinking for that time thinkers.

As you can see, this is how did he

think about god and heaven. If

someone live really righteously, then

it doesn’t matter whether god exist or

not. This is what pascal suggested to

peoples and make them believe god.

The Provincial letters are collection of 18 letters published by Pascal at 1656 to 1657.

The letters were also about the Jansenism, which is the denomination of Christian,

specially influenced by puritans a lot. This denomination started by Cornelis Jansen and

based on port – royal abbey. Main content of the letter is about depending Jansenism

from other opposite denomination, such as Jesuits. However, the letters suggested

completely new way of writing for thinkers of that time, and that impacted on many

writing of peer thinkers of Pascal. Specifically, the letter include the things about

theological problems between many denominations of that time. Pascal used many

they are in. That expressions make this letter really influenced to peer writers of Pascal.

tinkers of enlightenment period, but he has many influences on

impacted the peer thinkers, and gave them a wider perspective about