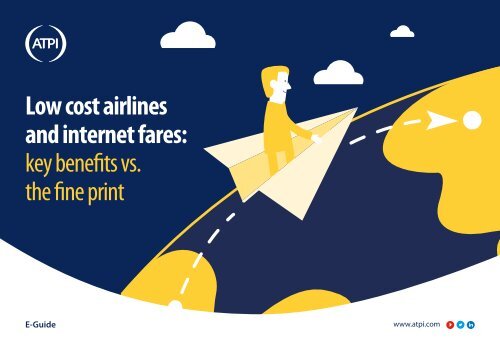 Firmly established in the airline industry and probably

here to stay. This document looks at some of the pros

and cons of using these airlines outside the leisure or

consumer market, and considers their viability for the

business traveller, whether an engineer off to fix an oil

rig, or a road warrior travelling to sales meetings.

The old ‘them and us’ differentiation between legacy carriers such

as Lufthansa, British Airways and Air France versus the new entrants

such as Ryanair, EasyJet, SpiceJet and dozens of others is eroding

almost to the point of complete disappearance. Travellers want to

get from A to B, using a safe, cost effective method and knowing in

advance what will and will not be included in their air fare.

low cost is perhaps a misnomer. Probably they are better described

as web airlines, although that could be argued against and we’ll

come back to the question of distribution later.

Crucially, web airlines do not publish their fares. This is hard to

teaser ads and email campaigns. These marketing ploys do attract

travellers, but most web airlines operate a supply and demand

driven pricing structure, where repeated enquiries on a particular

route will trigger a mechanism that automatically drives up the price.

With no published fares, it’s effectively possible for every person

on a web airline aircraft to pay a different price for their tickets. So

case with a legacy airline which operates the ‘seat bucket’ principle

where prices vary but within a known set of parameters.

With very few exceptions, book with a web airline and you’ll be

treated just the same as any other passenger - as a business

rest of the passengers. Paying extra for early boarding or a seat

near the front is available to any passenger on some carriers,

and loyalty programmes also exist but hardly to the extent of

and other regular traveller features.

Using web airlines – things to be aware of:

All internet purchases are ticketed instantly; you cannot ‘hold’ a

booking for review and future confirmation.

agency credit card. No credit facility is extended by the airline or

they do with legacy carriers. Even if the fare purchased from a web

carrier allows changes, in many cases these can only be handled

an agent to process changes. Penalty fees where applicable will be

4. Use of corporate cards

cannot be made via a travel agent’s corporate card. With

some web carriers the actual card used to purchase online

MUST be presented at check-in, this is a fraud avoidance

measure but means that corporate or agency cards

and no escalation of complaints

Low cost airlines do not offer guaranteed flight connections. For

example: even if booking the same web airline for two sectors

connecting via a hub airport, the bookings are treated as two

separate transactions. This means that a delay or cancellation to

the first flight might result in you missing the second flight, if this

happens your web airline will take no responsibility for refund or

rebooking. Similarly if an issue does occur, your travel management

airline and any complaints or compensation claims will be handled

as if you were a normal consumer.

travel on web airlines due to extra charges. For example you often

have to pay for your meal, seat requests, baggage, even coffee.

This can make the ‘cheap fare’ more expensive than the legacy

Traveller tracking is not easy. If a TMC makes the web airline booking

system in order to track the traveller, provide pre-trip information,

handle reporting, invoicing and 24 hour service. This extra work can

Low cost airlines treat every passenger in the same way; each has

contracted with the web airline effectively as a consumer and in

accordance with the terms and conditions of the web airline. These

are different to the legacy carriers who trade under the umbrella

specialist fares such as those enjoyed by the marine or offshore

industries when dealing with legacy carriers.

The gap closes between legacy and web carriers:

We did mention that the differences between the legacy

and web carriers are closing, and here’s the case for the

flexibility and zero or one piece baggage allowance. These fare types

will often match web airlines and when considered alongside food

carrier. They may come with heavy cancellation or change penalties,

similar to those imposed by web airlines.

is recognising the business traveller

A few but growing number of web airlines now distribute

as Travelport and Amadeus. These are the legacy airline

distribution channels and the web airlines theory is that

services if they are easy to access. However often the

web carriers do not display the full range of air fares

via the GDS, necessitating the agents to check on

between two points, but at least you can work out the averages,

consider historic pricing and have some idea of the cost going

forward, say if you are budgeting for a long term project. Also if you

need two flights to get from your origin to your destination, legacy

baggage and possibly boarding cards to cover both flights, and

importantly some assistance if the connection is missed.

Unless your budget stretches to Business Class, short haul travel on

point to point routes is generally a commodity purchase. Choosing

schedule as anything else for the leisure traveller. However for the

itineraries that are liable to change, then the cheapest fares

from either web or legacy airlines are unlikely to suit. Similarly an

cancel or run over may find these cheap fares unsuitable. However

give more flexibility and potentially avoid losing money. For the

executive traveller, choosing a changeable ticket rather than

airline will give some opportunity to avoid losing money

while still being cost effective.

needs of travellers and individual itineraries in order to advise on

many variables such as your business sector, geography and status

For examples of case studies and more how-to guides,

member of the team about

getting the best value air

fare for your journey, email

ATPI is among the world’s leading travel management

companies. Our dynamic and innovative approach to

savings and service has earned us one of the highest

client retention rates in the industry.

With over 100 offices worldwide, the company has successful

a number of key industries.