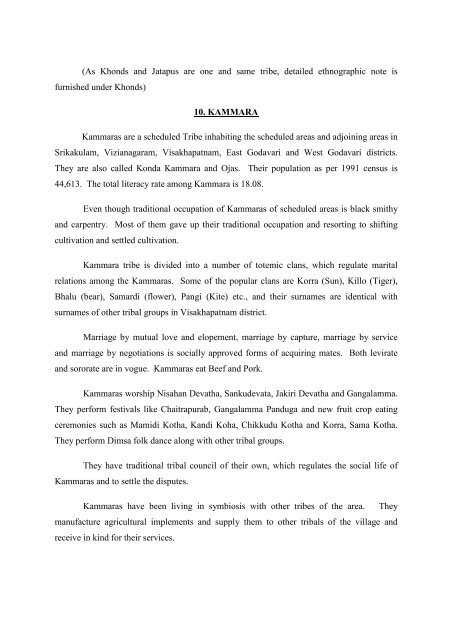 (As Khonds and Jatapus are one and same tribe, detailed ethnographic note is

They are also called Konda Kammara and Ojas. Their population as per 1991 census is

and carpentry. Most of them gave up their traditional occupation and resorting to shifting

Kammara tribe is divided into a number of totemic clans, which regulate marital

relations among the Kammaras. Some of the popular clans are Korra (Sun), Killo (Tiger),

Bhalu (bear), Samardi (flower), Pangi (Kite) etc., and their surnames are identical with

surnames of other tribal groups in Visakhapatnam district.

and marriage by negotiations is socially approved forms of acquiring mates. Both levirate

and sororate are in vogue. Kammaras eat Beef and Pork.

They perform Dimsa folk dance along with other tribal groups.

They have traditional tribal council of their own, which regulates the social life of

Kammaras and to settle the disputes.

Kammaras have been living in symbiosis with other tribes of the area. They

receive in kind for their services.