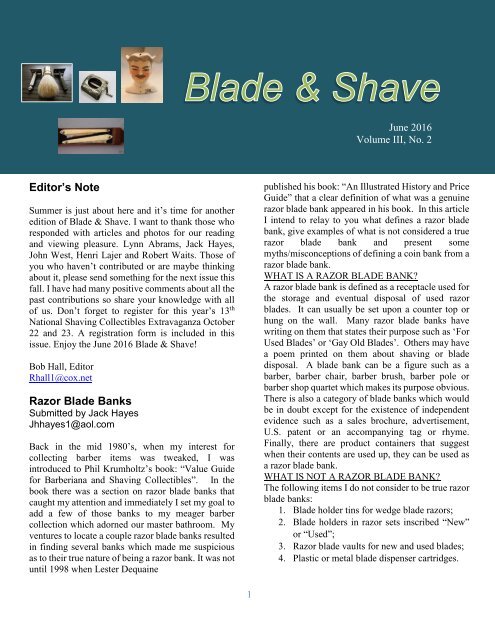 Summer is just about here and it’s time for another

edition of Blade & Shave. I want to thank those who

responded with articles and photos for our reading

John West, Henri Lajer and Robert Waits. Those of

you who haven’t contributed or are maybe thinking

about it, please send something for the next issue this

fall. I have had many positive comments about all the

of us. Don’t forget to register for this year’s 13 th

22 and 23. A registration form is included in this

collecting barber items was tweaked, I was

for Barberiana and Shaving Collectibles”. In the

book there was a section on razor blade banks that

caught my attention and immediately I set my goal to

add a few of those banks to my meager barber

collection which adorned our master bathroom. My

in finding several banks which made me suspicious

as to their true nature of being a razor bank. It was not

published his book: “An Illustrated History and Price

Guide” that a clear definition of what was a genuine

razor blade bank appeared in his book. In this article

I intend to relay to you what defines a razor blade

bank, give examples of what is not considered a true

razor blade bank and present some

myths/misconceptions of defining a coin bank from a

WHAT IS A RAZOR BLADE BANK?

A razor blade bank is defined as a receptacle used for

the storage and eventual disposal of used razor

blades. It can usually be set upon a counter top or

hung on the wall. Many razor blade banks have

writing on them that states their purpose such as ‘For

Used Blades’ or ‘Gay Old Blades’. Others may have

a poem printed on them about shaving or blade

disposal. A blade bank can be a figure such as a

There is also a category of blade banks which would

be in doubt except for the existence of independent

evidence such as a sales brochure, advertisement,

U.S. patent or an accompanying tag or rhyme.

Finally, there are product containers that suggest

when their contents are used up, they can be used as

WHAT IS NOT A RAZOR BLADE BANK?

The following items I do not consider to be true razor

different kinds of banks throughout their search. A

majority of these are intended to be receptacles for

coins rather than razor blade banks. It is usually the

these banks for used razor blades. However, none of

the following qualities has relevance in defining a

receptacle as a blade bank:

Razors, the two-piece tubular handle may have

appeared on Star razors soon after 1884 as a smooth

un-embossed handle. Later handles up to about 1887

handles had the star pattern. Kampfe finally got

around to filing for a U.S Design patent on the star

embossed handle in September, 1894 (the patent

expired in 1901). Since handles are interchangeable,

there are likely to be "mis-handled" razors around.

So look for the 1876 patent date on your tubular

razor handles, no matter what brand the razor.

Nevertheless, these last two issues can pose a

dilemma for a blade bank collector. A good rule of

thumb to follow is: “when in doubt, pass it up.” There

to build an attractive and desirable collection.

The Unknown Kampfe Patent: An

believed that at one time Philip Schrag’s October

Kampfe catalogs, ads, or tins, but I had not been

able to track down an example. The problem was

solved by Jeff and Jack Hayes, collectors of U.S.

made safety razors. Strangely, the date was found on

the handle of a 1900s-era Winchester safety razor,

and so noted by the sharp-eyed on-line seller. It

turned out to possibly be the wrong handle for a

Winchester razor but may be the correct handle for a

Kampfe Star razor. The date is shown as OCT. 24.

76 along with the Kampfe trademark stars in the

photo here. The patent is stamped right where it

belongs: on the handle.

As they did many other patents, it is quite likely that

requested by Mr. Schrag, According to the 3rd

display for safety razor blades was discovered in

a San Jose, Calif. antiques cooperative. Pears was a

blade packets to fill in the empty slots. The gold

lettering at the bottom reads:

Twenty-five years ago, I bought my first straight at

the Nashville Fairgrounds and almost immediately

decided that I wanted to know more about this simple

object dear to every man’s heart. I say simple because

all have the same handle and blade combination –

that’s it. But what is fascinating is how ingenious and

creative the makers were in coming up with so many

treasures. My favorite razors are the earlier ones

made of organic materials such as tortoise shell, cow

bone and, starting around 1800 we see the appearance

of ivory, mother-of-pearl and buffalo horn. Some of

the most beautiful razors in my estimation are the

early French razors that may not be as well known to

the American collector since France did not export

large quantities of razors as did England and later

Germany. Many French makers were unequaled in

their craftsmanship, as many high-end razors were

made by gold- and silversmiths: they were true

artists. These French razors are much sought-after

but quite difficult to find. Here is a selection from my

personal collection, all French and Fabulous for your

France and King of Naples and Sicily, circa 1812, even the

blades are overlaid with gold

Various examples of ivory and tortoise shell razors from 1800s

shell razor with fabulous silver ends; most likely part of an

Vallon a Paris.. tortoise shell with ornate end and blade, 1820

This is a great old thread from

comments. He is a dermatologist, I think.

So, for a while I have wondered whether there were

any benefits from straight razor shaving other than

the pleasure of it and the really nice, close shaves.

The tradition of the mug, brush and soap along with

all the great fragrances and razors out there have

always been enough for me, but is there any benefit

to the skin? Is the exfoliation good for your skin? Are

there any other benefits to the skin from using a

straight razor? Are there any products that are better

what skin type you have? See the information below

posted by RazorPete. What do you guys think?

Straight razor shaving, a variant of

Thanks Lynn for bringing this topic up. And I would

put forward my idea as to what I think straight razor

is doing and how it might help people's skin.

So to begin with, I think everyone can agree that

from the outer layer of the skin. Done daily, it’s a

mild repetitive injury that forces the skin to produce

new skin cells to regenerate. Injury sounds like a

bad thing for the skin, but actually there are some

studies which show that mild repetitive injury to the

skin surface is actually beneficial. First off, it causes

the skin to become smoother, and I think all of us

can appreciate that quality on our skin after we

there may be benefits deeper in the skin too, that can

help the effects of the aging process. Let me explain

the sun over many years decreases collagen

production in the skin. Collagen is the thick fibrous

stuff that makes leather strong. Obviously it does the

same thing for living skin too, and if you lose it,

then your skin gets thin and wrinkly. That’s what

causes aged skin to look the way it does. The face is

one of the areas which gets the most sun, and as a

result, it gets the most aging changes.

There is a technique called microdermabrasion,

which involves the rubbing of small salt or

aluminum chloride crystals on the skin to produce a

which makes skin thicker and firmer and reverses

wrinkling. This is well known, and I include below a

journals to back this up.

trauma to the skin similar to microdermabrasion,

and there is no reason to think that it would not, then

to microdermabrasion, especially if performed on a

regular (daily) basis. It would be interesting to

Anyway, this is what I think straight razor shaving

itself might be doing to the skin. This does not take

also have on your skin.

morning straight razor shave before you leave the

house for the day, you would be doing as much or

even more for your skin's overall health by further

I welcome further discussion by my fellow straight

razor place friends, on what I think is an important

No part of this publication may be

reproduced or transmitted in any form by

any means, electronic or mechanical,

including photocopying, recording or by

any information storage and retrieval

system, without previous permission, in

writing, from the Editor.

$85 individual plus spouse/significant other

along with this form to:

or payment may also be made through PayPal, using the email address

I would like a table at the meeting for exhibiting, swapping, or selling my collectibles. 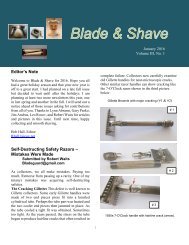 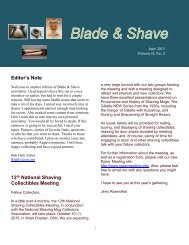 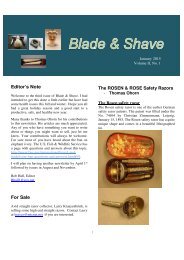 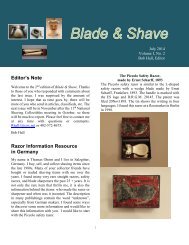 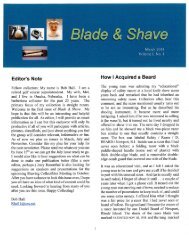