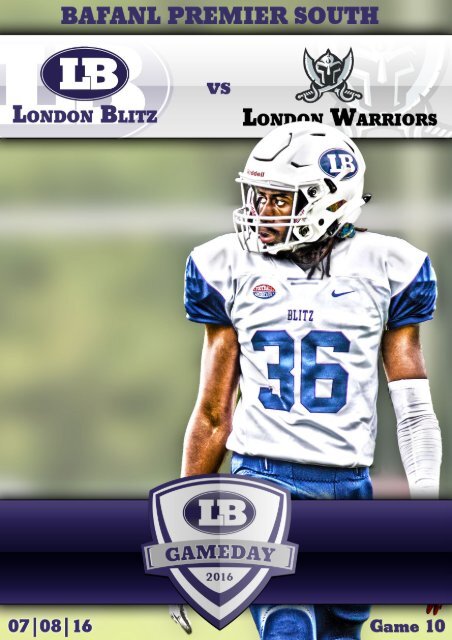 Welcome to Hertfordshire for the final regular season fixture of the 2016 campaign.

there has been a significant change in the team’s performances. The loss to Bristol was a

greatly needed wake-up call to the entire team. Not since before my time with the Blitz had

we lost to an opponent other than the London Warriors in a domestic fixture, and many

players did not see it as a possibility. Since that point the team has pulled together and

rededicated itself to the grind and intensity that earned this success in the first place. This

hard work has been evident in the results since our last visit.

continued to be a force in their division, cementing themselves another shot at the

postseason. Today, as they take on the Kent Exiles, they look to keep the momentum going

into the postseason and we wish them every luck with their campaign.

whole in the near future.

For the senior team, today’s opponent is a familiar one, and the Blitz – Warriors matchup has

become a mainstay of the last game of the season, often serving as a preview for the

championship game. This year however, nothing is guaranteed; the talent elsewhere in the

intensely challenging matchup with Tamworth next week. Nothing is taken for granted

anymore, the Blitz bear the fresh scars of complacency.

This will be a fierce fixture and, knowing that this may be the final chance to match up this

season, both teams will be looking to leave everything on the field.

Warriors youth team, who had won the British Youth American Football Association the

previous two years running. After being accepted by the British American Football League as

Affiliate Members, they arranged to play the two friendly matches required under BAFL

regulations. In October 2007, the Warriors played home and away games against two teams

to the Royal Holloway Vikings and ended in a 54–0 victory. One week later, they travelled to

play the Loughborough Aces and won again, this time 42–7.

After completing their obligations, the BAFL formally accepted the Warriors’ (the Cobras)

application to join the league in December 2007, allowing them to compete as full members

for the 2008 season. They were placed into the newly renamed London and South East

Conference in Division Two, where they made a huge impact, going on to complete an

undefeated season, culminating in victory over the Tamworth Phoenix at Britbowl XXII. In

team. The London Warrior Women compete in both flag and tackle football. In 2015 they

their own half to the South Wales three yard line. From there rookie RB Remmy Ezeabasili, a

graduate of the Blitz's junior programme on his senior debut, sprinted over to open the

penalties against the Blitz which put kicker Josh Hurford in position to attempt a 36 yard FG,

which was blocked by the on-rushing Blitz.

drive alive which finished with Adamson finding WR Sam Rogers, on a slant route, with a 10

Warriors goal line the Blitz were in prime position to score again, which they did via a 12 yard

When the Warriors moved the ball to the Blitz 17 yard line they again called on Hurford. But

sacked and the Blitz were forced to punt on fourth and long. The long snap was caught in

the strong wind and Sam Stokes recovered the loose ball. On the ensuing possession QB

Adamson wasted no time to start the second half scoring. The mobile QB was forced out of

his pocket, and despite a lineman grabbing at his ankle, he continued to roll to his right and

scrimmage, before running through a weak tackle to score from 20 yards.

from five yards, following a Prendergast interception, in the fourth quarter. Another poor

successive extra point. Instead holder Adamson attempted to run in for two but was stopped

short by the Warriors. 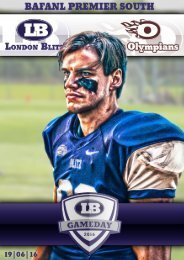