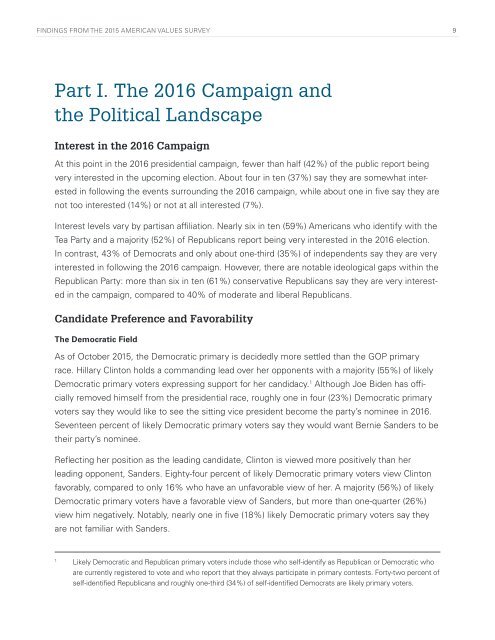 FINDINGS FROM THE 2015 AMERICAN VALUES SURVEY 9

Interest in the 2016 Campaign

At this point in the 2016 presidential campaign, fewer than half (42%) of the public report being

in following the events surrounding the 2016 campaign, while about one in five say they are

Interest levels vary by partisan affiliation. Nearly six in ten (59%) Americans who identify with the

Tea Party and a majority (52%) of Republicans report being very interested in the 2016 election.

In contrast, 43% of Democrats and only about one-third (35%) of independents say they are very

interested in following the 2016 campaign. However, there are notable ideological gaps within the

in the campaign, compared to 40% of moderate and liberal Republicans.

As of October 2015, the Democratic primary is decidedly more settled than the GOP primary

race. Hillary Clinton holds a commanding lead over her opponents with a majority (55%) of likely

Democratic primary voters expressing support for her candidacy. 1 Although Joe Biden has officially

removed himself from the presidential race, roughly one in four (23%) Democratic primary

voters say they would like to see the sitting vice president become the party’s nominee in 2016.

Reflecting her position as the leading candidate, Clinton is viewed more positively than her

favorably, compared to only 16% who have an unfavorable view of her. A majority (56%) of likely

Democratic primary voters have a favorable view of Sanders, but more than one-quarter (26%)

are not familiar with Sanders.

are currently registered to vote and who report that they always participate in primary contests. Forty-two percent of