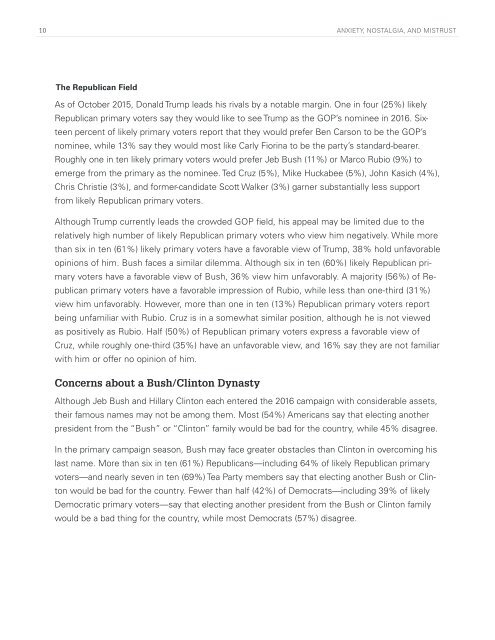 As of October 2015, Donald Trump leads his rivals by a notable margin. One in four (25%) likely

Republican primary voters say they would like to see Trump as the GOP’s nominee in 2016. Sixteen

nominee, while 13% say they would most like Carly Fiorina to be the party’s standard-bearer.

Although Trump currently leads the crowded GOP field, his appeal may be limited due to the

than six in ten (61%) likely primary voters have a favorable view of Trump, 38% hold unfavorable

opinions of him. Bush faces a similar dilemma. Although six in ten (60%) likely Republican primary

voters have a favorable view of Bush, 36% view him unfavorably. A majority (56%) of Republican

primary voters have a favorable impression of Rubio, while less than one-third (31%)

view him unfavorably. However, more than one in ten (13%) Republican primary voters report

being unfamiliar with Rubio. Cruz is in a somewhat similar position, although he is not viewed

as positively as Rubio. Half (50%) of Republican primary voters express a favorable view of

Cruz, while roughly one-third (35%) have an unfavorable view, and 16% say they are not familiar

with him or offer no opinion of him.

Concerns about a Bush/Clinton Dynasty

Although Jeb Bush and Hillary Clinton each entered the 2016 campaign with considerable assets,

their famous names may not be among them. Most (54%) Americans say that electing another

president from the “Bush” or “Clinton” family would be bad for the country, while 45% disagree.

In the primary campaign season, Bush may face greater obstacles than Clinton in overcoming his

would be bad for the country. Fewer than half (42%) of Democrats—including 39% of likely

would be a bad thing for the country, while most Democrats (57%) disagree.

FINDINGS FROM THE 2015 AMERICAN VALUES SURVEY 11 FIGURE 1. Electing another president from the Bush or Clinton family would be bad for the country By party affiliation Agree Disagree Don’t know/Refused All Americans 54 45 Democrat 42 57 Independent 60 39 Republican 61 38 Tea Party 69 29 0 10 20 30 40 50 60 70 80 90 100 Source: PRRI 2015 American Values Survey. Who are Donald Trump’s Supporters? Donald Trump’s emergence and endurance as the leading candidate in the Republican primary may be partly due to his ability to appeal to white working-class Americans. 2 A majority (55%) of Republicans and Republican-leaning independents who support Trump are white working class. In contrast, only about one-third (35%) of those supporting all other Republican candidates identify as white working class. Even other non-establishment candidates, like Ben Carson, do not seem to have the same appeal among white working-class Americans; less than one-third (32%) of Carson supporters are white working-class Americans. On no issue do Trump supporters differ more from those supporting other Republican candidates than on the issue of immigration. Nearly seven in ten (69%) Trump supporters say that immigration is a critical issue to them personally. In contrast, only half (50%) of those who support other candidates say that the issue of immigration is critically important to them. Trump supporters are much more likely to express negative views of immigrants than the supporters of other candidates. Eight in ten (80%) Trump supporters say that immigrants today are a burden to the U.S. because they take American jobs, housing, and health care. Nearly three-quar- 2 For more information about the definition of the white working class, see PRRI’s report, Beyond Guns and God: Understanding the Complexities of the White Working Class in America [http://publicreligion.org/research/2012/09/race-class-culture-survey-2012/].