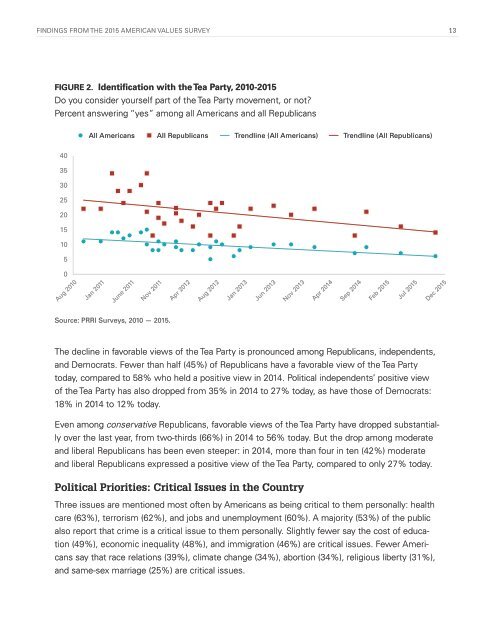 FINDINGS FROM THE 2015 AMERICAN VALUES SURVEY 13

Do you consider yourself part of the Tea Party movement, or not?

Percent answering “yes” among all Americans and all Republicans

The decline in favorable views of the Tea Party is pronounced among Republicans, independents,

and Democrats. Fewer than half (45%) of Republicans have a favorable view of the Tea Party

Even among conservative Republicans, favorable views of the Tea Party have dropped substantially

and liberal Republicans has been even steeper: in 2014, more than four in ten (42%) moderate

and liberal Republicans expressed a positive view of the Tea Party, compared to only 27% today.

Three issues are mentioned most often by Americans as being critical to them personally: health

also report that crime is a critical issue to them personally. Slightly fewer say the cost of education

and same-sex marriage (25%) are critical issues.

12 ANXIETY, NOSTALGIA, AND MISTRUST ters (73%) of Trump supporters say that it bothers them when they come into contact with immigrants who speak little or no English. Supporters of other Republican candidates also view immigrants negatively, but somewhat less so—a majority (56%) say that immigrants are a burden on the U.S. due to their economic impact and a similar number (58%) report that coming into contact with immigrants who do not speak English bothers them. Trump supporters also express greater concern about discrimination against white Americans and white men in particular. 3 Roughly three-quarters (74%) of Trump supporters—compared to 57% of supporters of all other Republican candidates—agree that, today, discrimination against whites has become as big a problem as discrimination against blacks and other minorities. More than four in ten (42%) Trump supporters—compared to 30% of supporters of all other Republican candidates—say that white men face a lot of discrimination in the U.S. today. The Tea Party Declining Size, Changing Composition of the Tea Party, 2010-2015 PRRI has tracked Tea Party affiliation in 32 national surveys between 2010 and 2015. These surveys reveal that the percentage of Americans who identify with the Tea Party movement has declined by nearly half over the last five years, from 11% in 2010 to 6% today. Tea Party affiliation has also dropped among Republicans, from 22% in 2010 down to 14% today. Even as its numbers have shrunk, the Tea Party’s composition has remained fairly stable, with some notable exceptions. The Tea Party continues to be older, whiter, and more male than the general population. But compared to 2010, members of today’s Tea Party earn less money: in 2010, 22% lived in households with less than $30,000 in annual income, compared to 30% today. There has also been an uptick in the overlap between those who identify with the Tea Party and those who identify with the Christian Right or conservative Christian political movement. In 2010, PRRI found that 47% of the Tea Party also considered themselves part of the Christian Right, a number that has grown to 54% today. Declining Favorability of the Tea Party Favorable views of the Tea Party have dropped 10 percentage points over the last year. Only one-quarter (25%) of Americans currently hold a favorable view of the Tea Party, down from 35% last year. Most (57%) Americans currently hold an unfavorable view of the group, up from 46% last year. Notably, nearly one in five (17%) report being unfamiliar with the Tea Party or did not provide an opinion about the group. 3 Throughout this report, the term “white Americans” refers to white, non-Hispanic Americans.