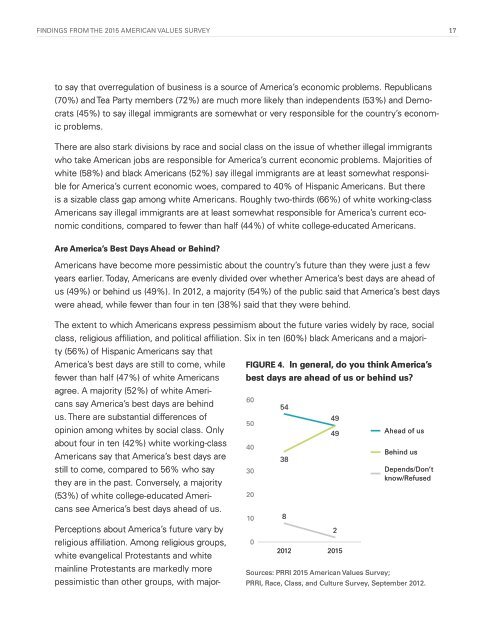 FINDINGS FROM THE 2015 AMERICAN VALUES SURVEY 17

to say that overregulation of business is a source of America’s economic problems. Republicans

who take American jobs are responsible for America’s current economic problems. Majorities of

for America’s current economic woes, compared to 40% of Hispanic Americans. But there

is a sizable class gap among white Americans. Roughly two-thirds (66%) of white working-class

conditions, compared to fewer than half (44%) of white college-educated Americans.

Are America’s Best Days Ahead or Behind?

years earlier. Today, Americans are evenly divided over whether America’s best days are ahead of

were ahead, while fewer than four in ten (38%) said that they were behind.

The extent to which Americans express pessimism about the future varies widely by race, social

(56%) of Hispanic Americans say that

America’s best days are still to come, while

fewer than half (47%) of white Americans

agree. A majority (52%) of white Americans

say America’s best days are behind

us. There are substantial differences of

opinion among whites by social class. Only

about four in ten (42%) white working-class

still to come, compared to 56% who say

they are in the past. Conversely, a majority

see America’s best days ahead of us.

Perceptions about America’s future vary by

pessimistic than other groups, with major-

FIGURE 4. In general, do you think America’s

best days are ahead of us or behind us?

16 ANXIETY, NOSTALGIA, AND MISTRUST Part II. The Economic Climate America heads into the 2016 election amid a climate of waning optimism about its economic health, the state of its communities, and the fairness of the economic system. Americans see the causes of this malaise as multi-faceted, and they continue to favor populist economic policies, such as an increase in the minimum wage and paid sick and parental leave in the workplace. A Gloomy Economic Outlook Continues Is America Still in a Recession? More than seven in ten (72%) Americans believe that the country is still in a recession, while roughly one-quarter (27%) believe the economic recession is over. Americans’ views about the economic recession have remained steady over the last few years, with an identical percentage (72%) of Americans saying the country was still in a recession in 2014, and 76% saying the country was still in a recession in 2012. There are important divisions among white Americans by social class. Nearly eight in ten (78%) white working-class Americans say America is still in a recession, while significantly fewer (62%) white college-educated Americans say the same. Who’s to Blame? Causes of Current Economic Problems While Americans blame many things for America’s current economic problems, they are most united in pointing the finger at business corporations. More than eight in ten (86%) Americans say that corporations moving American jobs overseas is somewhat or very responsible for the present economic troubles facing the U.S., up 12 percentage points from 74% in 2012. Nearly eight in ten (77%) Americans say that corporations refusing to pay workers a fair wage is at least somewhat responsible for the current economic problems, and nearly three-quarters (73%) of the public mention China’s unfair trade practices. Roughly seven in ten (69%) Americans say burdensome government regulations are at least somewhat responsible for the country’s economic problems, up slightly from 65% in 2012. Substantially fewer (54%) Americans—although still a majority—say that illegal immigrants who are taking Americans jobs are at least somewhat responsible for our current economic problems; a modest increase from 49% in 2012. There is bipartisan agreement that outsourcing jobs and China’s unfair trade practices are responsible for America’s economic problems, but that’s where partisan agreement ends. Democrats (88%) are more likely than independents (75%) and Republicans (67%) to say that the lack of fair wages paid by corporations is at least somewhat responsible for current economic problems. Conversely, Republicans (88%) are more likely than independents (68%) and Democrats (57%)