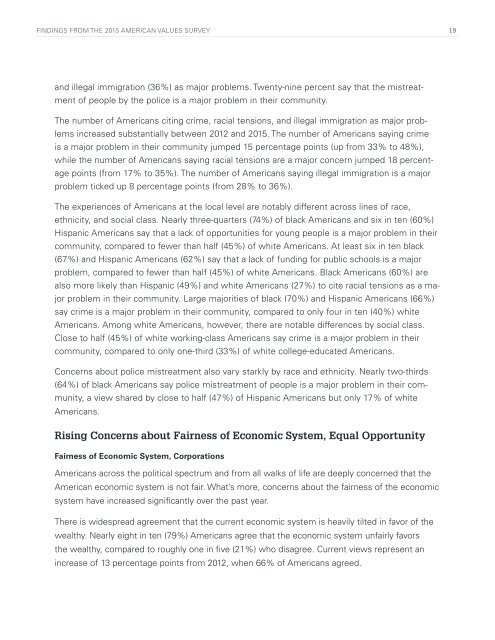 FINDINGS FROM THE 2015 AMERICAN VALUES SURVEY 19

and illegal immigration (36%) as major problems. Twenty-nine percent say that the mistreatment

of people by the police is a major problem in their community.

increased substantially between 2012 and 2015. The number of Americans saying crime

is a major problem in their community jumped 15 percentage points (up from 33% to 48%),

points (from 17% to 35%). The number of Americans saying illegal immigration is a major

The experiences of Americans at the local level are notably different across lines of race,

ethnicity, and social class. Nearly three-quarters (74%) of black Americans and six in ten (60%)

community, compared to fewer than half (45%) of white Americans. At least six in ten black

problem, compared to fewer than half (45%) of white Americans. Black Americans (60%) are

problem in their community. Large majorities of black (70%) and Hispanic Americans (66%)

say crime is a major problem in their community, compared to only four in ten (40%) white

Americans. Among white Americans, however, there are notable differences by social class.

community, compared to only one-third (33%) of white college-educated Americans.

(64%) of black Americans say police mistreatment of people is a major problem in their community,

American economic system is not fair. What’s more, concerns about the fairness of the economic

system have increased significantly over the past year.

the wealthy, compared to roughly one in five (21%) who disagree. Current views represent an

18 ANXIETY, NOSTALGIA, AND MISTRUST ities believing that America’s best days are behind us (60% and 55%, respectively). In contrast, majorities of Americans who are affiliated with non-Christian religions (55%), Catholics (56%), black Protestants (57%), and religiously unaffiliated Americans (58%) all believe America’s best days are ahead of us. Views about America’s future are strongly impacted by political affiliation. Roughly six in ten (59%) Democrats—including 61% of white Democrats—say America’s best days are ahead of us. Fewer than half (47%) of independents and only about four in ten (41%) Republicans believe that America’s best days are still to come; nearly six in ten (58%) Republicans say that America’s best days are behind us. No group expresses greater pessimism about America’s future than members of the Tea Party. Only one-third (33%) of Tea Party members say that the country’s best days lie ahead, while about two-thirds (65%) say they are in the past. Among political subgroups, Tea Party members have experienced the largest swing in opinion over the last few years. In 2012, Tea Party members were more divided in their views: 42% believed America’s best days were ahead, while 47% said America’s best days were behind it. Problems in Local Communities Americans’ increasing pessimism about the direction of the country is reflected in their views about prevalent problems within their local communities. Roughly half of Americans say that a lack of funding for public schools (51%), a lack of opportunities for young people (51%), and crime (48%) are major problems in their communities. More than one-third cite racial tensions (35%) FIGURE 5. Which of the following are problems in your own community? Percent who say each is a major problem By race/ethnicity All Americans White, non-Hispanic Hispanic Black, non-Hispanic 80 60 40 20 29 17 47 64 60 49 35 27 36 33 48 36 48 40 66 70 51 45 62 67 74 60 51 45 0 Mistreatment of people by police Racial Tensions Illegal immigration Crime Lack of funding for public schools Lack of opportunities for young people Source: PRRI 2015 American Values Survey.