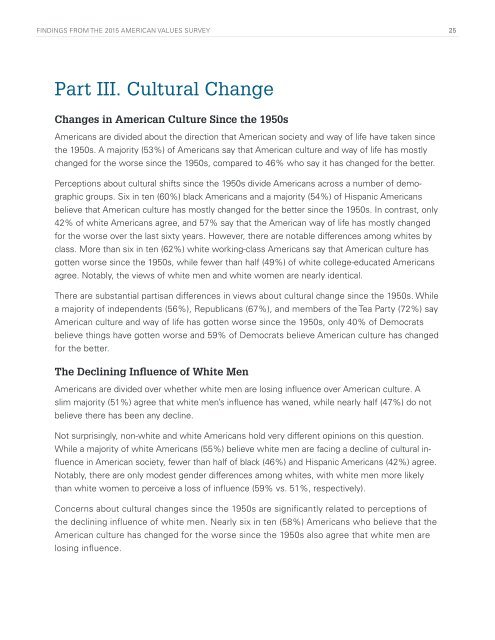 FINDINGS FROM THE 2015 AMERICAN VALUES SURVEY 25

Changes in American Culture Since the 1950s

the 1950s. A majority (53%) of Americans say that American culture and way of life has mostly

groups. Six in ten (60%) black Americans and a majority (54%) of Hispanic Americans

believe that American culture has mostly changed for the better since the 1950s. In contrast, only

42% of white Americans agree, and 57% say that the American way of life has mostly changed

for the worse over the last sixty years. However, there are notable differences among whites by

gotten worse since the 1950s, while fewer than half (49%) of white college-educated Americans

agree. Notably, the views of white men and white women are nearly identical.

There are substantial partisan differences in views about cultural change since the 1950s. While

American culture and way of life has gotten worse since the 1950s, only 40% of Democrats

The Declining Influence of White Men

Americans are divided over whether white men are losing influence over American culture. A

slim majority (51%) agree that white men’s influence has waned, while nearly half (47%) do not

believe there has been any decline.

Not surprisingly, non-white and white Americans hold very different opinions on this question.

in American society, fewer than half of black (46%) and Hispanic Americans (42%) agree.

Notably, there are only modest gender differences among whites, with white men more likely

than white women to perceive a loss of influence (59% vs. 51%, respectively).

the declining influence of white men. Nearly six in ten (58%) Americans who believe that the