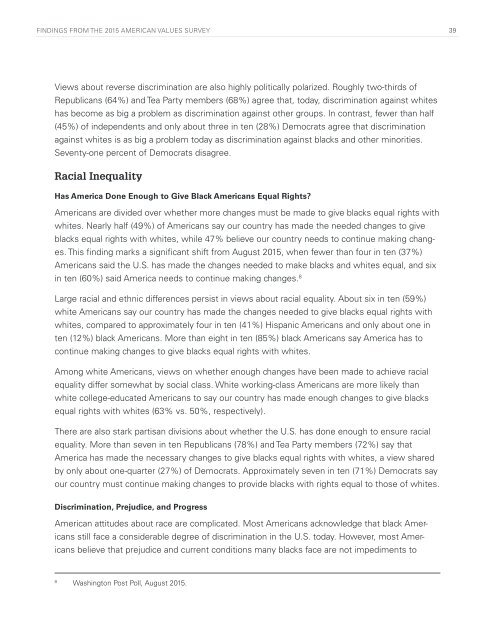 FINDINGS FROM THE 2015 AMERICAN VALUES SURVEY 39

has become as big a problem as discrimination against other groups. In contrast, fewer than half

against whites is as big a problem today as discrimination against blacks and other minorities.

Has America Done Enough to Give Black Americans Equal Rights?

whites. Nearly half (49%) of Americans say our country has made the needed changes to give

This finding marks a significant shift from August 2015, when fewer than four in ten (37%)

Americans said the U.S. has made the changes needed to make blacks and whites equal, and six

Large racial and ethnic differences persist in views about racial equality. About six in ten (59%)

whites, compared to approximately four in ten (41%) Hispanic Americans and only about one in

continue making changes to give blacks equal rights with whites.

Among white Americans, views on whether enough changes have been made to achieve racial

There are also stark partisan divisions about whether the U.S. has done enough to ensure racial

equality. More than seven in ten Republicans (78%) and Tea Party members (72%) say that

America has made the necessary changes to give blacks equal rights with whites, a view shared

by only about one-quarter (27%) of Democrats. Approximately seven in ten (71%) Democrats say

our country must continue making changes to provide blacks with rights equal to those of whites.

American attitudes about race are complicated. Most Americans acknowledge that black Americans

still face a considerable degree of discrimination in the U.S. today. However, most Americans