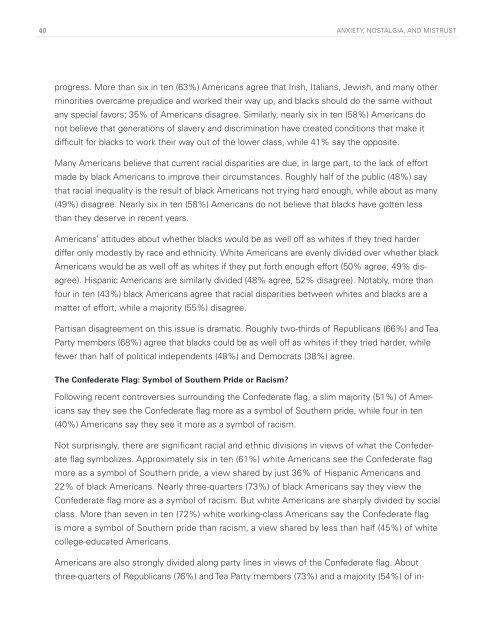 progress. More than six in ten (63%) Americans agree that Irish, Italians, Jewish, and many other

minorities overcame prejudice and worked their way up, and blacks should do the same without

any special favors; 35% of Americans disagree. Similarly, nearly six in ten (58%) Americans do

difficult for blacks to work their way out of the lower class, while 41% say the opposite.

Many Americans believe that current racial disparities are due, in large part, to the lack of effort

made by black Americans to improve their circumstances. Roughly half of the public (48%) say

that racial inequality is the result of black Americans not trying hard enough, while about as many

(49%) disagree. Nearly six in ten (58%) Americans do not believe that blacks have gotten less

than they deserve in recent years.

differ only modestly by race and ethnicity. White Americans are evenly divided over whether black

Americans would be as well off as whites if they put forth enough effort (50% agree, 49% disagree).

matter of effort, while a majority (55%) disagree.

Partisan disagreement on this issue is dramatic. Roughly two-thirds of Republicans (66%) and Tea

Party members (68%) agree that blacks could be as well off as whites if they tried harder, while

fewer than half of political independents (48%) and Democrats (38%) agree.

The Confederate Flag: Symbol of Southern Pride or Racism?

say they see the Confederate flag more as a symbol of Southern pride, while four in ten

(40%) Americans say they see it more as a symbol of racism.

Not surprisingly, there are significant racial and ethnic divisions in views of what the Confederate

more as a symbol of Southern pride, a view shared by just 36% of Hispanic Americans and

Confederate flag more as a symbol of racism. But white Americans are sharply divided by social

is more a symbol of Southern pride than racism, a view shared by less than half (45%) of white

Americans are also strongly divided along party lines in views of the Confederate flag. About

FINDINGS FROM THE 2015 AMERICAN VALUES SURVEY 41 dependents say they see the Confederate flag more as a symbol of Southern pride than racism, while only about one-third (32%) of Democrats agree. More than six in ten (62%) Democrats, including a majority (53%) of white Democrats, view the flag more as a symbol of racism. Notably, there are stark religious divides in attitudes about the Confederate flag. Seven in ten white evangelical Protestants (70%) and white mainline Protestants (70%) and roughly two-thirds (65%) of white Catholics say the Confederate flag is more of a symbol of Southern pride. By contrast, 41% of religiously unaffiliated Americans, 39% of Hispanic Catholics, and 20% of black Protestants say the Confederate flag is more a symbol of Southern pride to them. Approximately three-quarters (76%) of black Protestants say it is more a symbol of racism. The Racial Inequity Index In order to provide an overall measure of Americans’ attitudes about race, we created a Racial Inequity Index (RII), built as an additive scale using five questions: 9 Questions Comprising the Racial Inequity Index (RII) 1. Irish, Italians, Jewish, and many other minorities overcame prejudice and worked their way up. Blacks should do the same without any special favors. 2. Generations of slavery and discrimination have created conditions that make it difficult for blacks to work their way out of the lower class. 3. Today discrimination against whites has become as big a problem as discrimination against blacks and other minorities. 4. Our country has made the changes needed to give blacks equal rights with whites OR Our country needs to continue making changes to give blacks equal rights with whites. 5. How well does the federal government look out for the needs and interests of the following groups? … Blacks A higher score on the Racial Inequity Index (RII) indicates that a respondent believes generally that systemic discrimination against blacks and other minorities impacts racial inequality today, while a low score on the RII indicates that a respondent believes that racial minorities today have 9 The Cronbach’s alpha for the five items used in the scale is 0.759, which indicates that they are suitable for the inclusion in a single scale. The Racial Inequity Index was created as an additive scale from the five questions listed above and produced a score range of 6-19. Categories were created as follows: very high (score of 6-8), high (score of 9-11), moderate (score of 12-13), low (score of 14-17), and very low (score of 18-19). The scale does not include respondents who answered “Don’t know” or refused to answer, representing 6% of the total sample. For analysis purposes, this section collapses the “high” and “very high” groups into a single “high” group; similarly the “low” and “very low” groups are collapsed into a single “low” group.